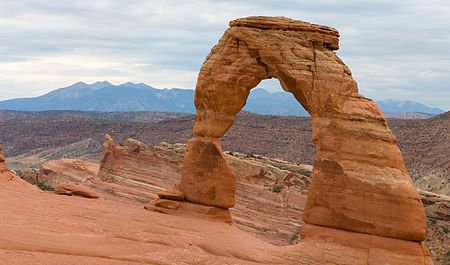 A natural arch, natural bridge or, less commonly, a rock arch is a natural rock formation where a rock arch forms, with an opening underneath. Most natural arches form as a narrow bridge, walled by cliffs, become narrower from erosion, with a softer rock stratum under the cliff-forming stratum gradually eroding out until the rock shelters thus formed meet underneath the ridge, thus forming the arch. Natural arches commonly form where cliffs are subject to erosion from the sea, rivers or weathering (subaerial processes); the processes "find" weaknesses in rocks and work on them, making them larger until they break through.

The choice between bridge and arch is somewhat arbitrary. The Natural Arch and Bridge Society identifies a bridge as a subtype of arch that is primarily water-formed.[1] By contrast, the Dictionary of Geological Terms defines a natural bridge as a "natural arch that spans a valley of erosion."[2] 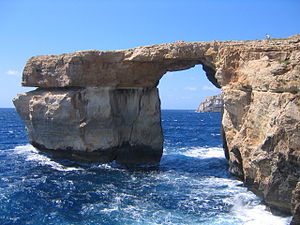 On coasts two different types of arches can form depending on the geology. On discordant coastlines rock types run at 90° to the coast. Wave refraction concentrates the wave energy on the headland, and an arch forms when caves break through the headland, e.g., London Bridge in (Victoria, Australia). When these eventually collapse, they form stacks and stumps. On concordant coastlines rock types run parallel to the coastline, with weak rock (such as shale) protected by stronger rock (such as limestone) the wave action breaks through the strong rock and then erodes the weak rock very quickly. Good examples of this are at Durdle Door and Stair Hole near Lulworth Cove on the Dorset Jurassic Coast in south England, although these are on an area of concordant coastline. When Stair Hole eventually collapses, it will form a cove. 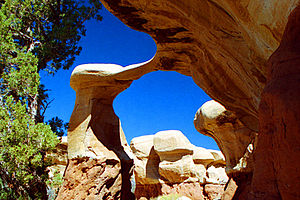 Metate Arch in the Devil's Garden of the Grand Staircase-Escalante National Monument: a very thin arch near the end of its life.

Weather-eroded arches begin their formation as deep cracks which penetrate into a sandstone layer. Erosion occurring within the cracks wears away exposed rock layers and enlarges the surface cracks isolating narrow sandstone walls which are called fins. Alternating frosts and thawing cause crumbling and flaking of the porous sandstone and eventually cut through some of the fins. The resulting holes become enlarged to arch proportions by rockfalls and weathering. The arches eventually collapse leaving only buttresses that in time will erode.[4] 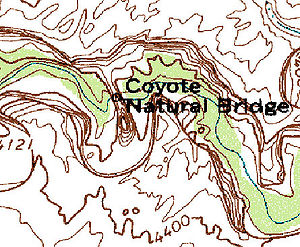 A topographic map of Coyote Natural Bridge in Utah shows how the meandering Coyote Gulch carved a shorter route through the rock under the arch. The old riverbed is now higher than the present water level.

Some natural bridges may look like arches, but they form in the path of streams that wear away and penetrate the rock. Pothole arches form by chemical weathering as water collects in natural depressions and eventually cuts through to the layer below. 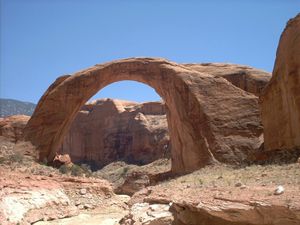 Rainbow Bridge was formed by a meandering watercourse.

Natural Bridges National Monument in Utah protects the area surrounding three large natural bridges all of which were formed by streams running through canyons. The largest of which is named Sipapu Bridge with a span of 225 feet (69 m). The Rainbow Bridge National Monument's namesake was also formed by flowing water which created the largest known natural bridge in the Western Hemisphere with a span of 234 feet (71 m), based on a laser measurement made in 2007. Xianren Bridge, also known as Fairy Bridge, in Guangxi, China is currently the world's largest known natural bridge with a span recorded at 400 feet (120 m) by the Natural Arch and Bridge Society in October 2010, with a precision of ±15 feet (4.6 m).[5][6]

Natural bridges can form from natural limestone caves, where paired sinkholes collapse and a ridge of stone is left standing in between, with the cave passageway connecting from sinkhole to sinkhole.

Like all rock formations, natural bridges are subject to continued erosion, and will eventually collapse and disappear. One example of this was the double-arched Victorian coastal rock formation, London Bridge, which lost an arch after storms increased erosion.[7]

Arches as highway or railway bridges

In a few places in the world, natural arches are truly natural bridges because there are roads or railroads running across them.

In Virginia, US Route 11 traverses the famous Natural Bridge.

Two additional such arches are found in Kentucky. One, a cave erosion arch made of limestone, is located in Carter Caves State Park and it has a paved road on top. Another, a weather-eroded sandstone arch with a dirt road on top is located on the edge of Natural Bridge State Resort Park in Kentucky. It is called White's Branch Arch (also known as the Narrows) and the road going over it is usually referred to as the Narrows Road.

Another is found in Ponoarele Village, in Romania. It is 60 m long, 13 m wide, features a stone arch 4 m thick, 20 m high, with a 9 m span. It is called God's Bridge (Podul lui Dumnezeu) and it is effectively used for traffic.

The railroad from Lima, Peru crosses the Rio Yauli on a natural bridge near kilometer 214.2 as it approaches the city of La Oroya, Peru