From Infogalactic: the planetary knowledge core
Jump to: navigation, search
This article is about the Uriah P. Levy Center and Jewish Chapel at the U.S. Naval Academy. For information about the chapel at Naval Station Norfolk, the Navy's oldest land-based Jewish Chapel, see Commodore Levy Chapel. 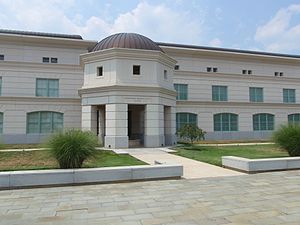 The Commodore Uriah P. Levy Center and Jewish Chapel is the Jewish chapel at the United States Naval Academy, in Annapolis, Maryland. The center is named in honor of Commodore Uriah P. Levy (1792-1862), the first Jewish commodore in the United States Navy, who is famous for refusing to flog his sailors.[1][2] The Levy Center is adjacent to Mitscher Hall and contains a 410-seat synagogue, a fellowship hall, a Character Learning Center, classrooms, and offices for the Brigade’s social director, the academic board, and the Academy’s Honor Board.[2]

Before the chapel was completed in 2005, Jewish midshipmen attended Congregation Knesset Israel in downtown Annapolis.[3]

The groundbreaking ceremony was held on November 2, 2003.[2] The builder was the Whiting-Turner Contracting Company.[2] The building was dedicated in September 2005.[4]

The Levy Center cost $8 million to design, build and furnish.[2] Approximately $1.8 million was paid for with military construction funds.[2] The remaining amount was paid for by private donations raised by the Friend of the Jewish Chapel, a campaign headed by Jewish alumni of the academy and others.[2][5] It was given to the Academy upon completion.[5] 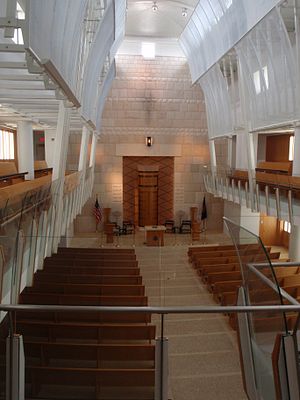 The 35,000-square-foot (3,300 m2) building was designed by Maryland architect Joseph Boggs.[5][2] The entrance pavilion has elements related to the center bay of Thomas Jefferson's Monticello. Levy purchased Monticello in 1834 and restored it because of his admiration for Jefferson, who died in 1826.[6] The chapel includes a nearly 45-foot-high wall that is a replica of the Western Wall in Jerusalem. The wall is made of Jerusalem stone.[3] The roof of the building is constructed of copper.[2] The architecture of the exterior is consistent with nearby Bancroft Hall.[7]

The chapel was awarded the Maryland AIA Honor Awards 2006, Public Building of the Year; Institutional.[8]