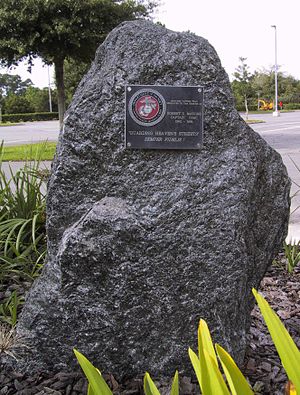 The roots of the NAWCTSD reach back to April 1941 when then-Commander Luis de Florez became head of the new Special Devices Desk in the Engineering Division of the Navy’s Bureau of Aeronautics (BuAer). De Florez championed the use of "synthetic training devices" and urged the Navy to undertake development of such devices to increase readiness. In June, the desk became the Special Devices Section.

Throughout World War II, the Section developed numerous innovative training devices including ones that used motion pictures to train aircraft gunners, a device to train precision bombing, and a kit with which to build model terrains to facilitate operational planning in the field.

As NAWCTSD evolved and grew, it was aligned at various times under several different parent organizations within the Navy. In 1956, it became the Naval Training Device Center (NAVTRADEVCEN). Over a three-year period in the mid-1960s, the Center moved from its Long Island location to Orlando, Florida, taking residence as a tenant activity at the then-Orlando Air Force Base, that installation subsequently becoming Naval Training Center Orlando in 1968 until its closure in 1999 pursuant to a 1993 Base Realignment and Closure Commission decision.

In 1985, the by then renamed Naval Training Equipment Center (NTEC) became the Naval Training Systems Center (NTSC). In 1988, the Center moved from NTC Orlando to its present headquarters approximately 15 miles east of its former location and just south of the University of Central Florida campus. The main building complex named for its founding father, de Florez.

On October 1, 1993, the Naval Training Systems Center became today's NAWCTSD. In 2003, the command was briefly renamed Naval Air Systems Command Training Systems Division (NAVAIR-TSD), but has since reverted to its original name. In 2005, the physical facility and property was also designated as an independent base named Naval Support Activity Orlando, making it the sole remaining active duty U.S. Navy installation in the Orlando area. NAWCTSD remains a significant component of the Naval Air Systems Command.[4]

The land and main buildings on which the main NAWCTSD facility is located inside the Central Florida Research Park is a U.S. Government installation that was designated as Naval Support Activity Orlando in 2005. Additional nearby buildings and facilities are shared in partnership with the Central Florida Research Park and the University of Central Florida and house other Department of Defense (DoD) and Department of Homeland Security (DHS) activities, to include the U.S. Army Program Executive Office for Simulation, Training and Instrumentation (PEO-STRI), the U.S. Marine Corps Program Manager for Training Systems (PMTRASYS), the Air Force Agency for Modeling and Simulation (AFAMS), the U.S. Coast Guard Liaison Office, and the United States Army Simulation and Training Technology Center.[5]

As previously stated, the Commanding Officer of NAWCTSD is concurrently dual-hatted as the Commanding Officer of NSA Orlando. Command of the combined NAWCTSD and NSA Orlando is held by a Naval Aviator or Naval Flight Officer in the rank of Captain, either an unrestricted line officer dual-designated as an acquisition professional (AP), or a restricted line aeronautical engineering duty officer.

The gate guardian aircraft for the facility is a Douglas A-4 Skyhawk, BuNo 139931, in Blue Angels livery.[6] This aircraft was previously a gate guardian at the former NTC Orlando and was relocated to NSA Orlando in 1999, just prior to the former's closure due to BRAC.