The Naval War College (NWC or NAVWARCOL) is the staff college and "Home of Thought" for the United States Navy in Newport, Rhode Island. The NWC educates and develops leaders, supports defining the future Navy and associated roles and missions, supports combat readiness, and strengthens global maritime partnerships. The current president is Rear Admiral P. Gardner Howe, III, a 1984 graduate of the U.S. Naval Academy. He previously commanded Naval Special Warfare Unit Three in Bahrain, Naval Special Warfare Group Three in San Diego, and Special Operations Command, Pacific in Hawaii. He is the first Navy SEAL officer to serve as president on the Naval War College.[3]

The college was established on October 6, 1884; its first president, Commodore Stephen B. Luce, was given the old building of the Newport Asylum for the Poor to house it on Coasters Harbor Island in Narragansett Bay.[4] Among the first four faculty members were Tasker H. Bliss, a future Army Chief of Staff, James R. Soley, the first civilian faculty member and a future Assistant Secretary of the Navy, and, most famously, Captain (later, Rear Admiral) Alfred Thayer Mahan, who soon became renowned for the scope of his strategic thinking and influence on naval leaders worldwide. 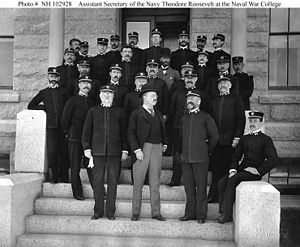 Assistant Secretary of the Navy Theodore Roosevelt on the steps of the Naval War College with faculty and students.

The College engaged in wargaming various scenarios from 1887 on, and in time became a laboratory for the development of war plans. Nearly all of the U.S. naval operations of the twentieth century were originally designed and gamed at the NWC.

More than 50,000 students have graduated since its first class of 9 students in 1885 and about 300 of today’s active duty admirals and generals and senior executive service leaders are alumni. The college’s joint professional military education (JPME) programs prepare leaders for the challenges of operational and strategic leadership over the remainder of their careers as decision makers and problem solvers. More than 1,900 students have graduated from the Maritime Staff Operators Course, 200 from the Executive Level OLW Course, and more than 450 U.S. and international flag and general officers from the flag course. Just as its educational programs have expanded in depth and reach, so have the research and analysis efforts conducted by our Center for Naval Warfare Studies. Through war games, conferences, workshops, and publications, our research arm provides direct curriculum support to our educational programs and focused, task-driven analysis for fleet customers and government agencies across the national security spectrum.

College of Naval Command and Staff

The College of Naval Command and Staff is a multidisciplinary program designed for U.S. Navy and U.S. Coast Guard officers in the grade of lieutenant commander, U.S. Marine Corps, U.S. Army, and U.S. Air Force officers in the grade of major, and civilians of equivalent seniority from various federal agencies. This intermediate level service college course provides an initial opportunity for joint professional military education wherein students prepare for increased responsibilities as commanders / lieutenant colonels, and as junior captains / colonels.[5]

Originally established in 1998 as the Naval Operational Planner Course, the Maritime Advanced Warfighting School (MAWS) is a 13-month program that educates U.S. officers of all services to:

The College of Naval Warfare is a multidisciplinary program designed for U.S. Navy and U.S. Coast Guard officers in the grades of commander or captain U.S. Marine Corps, U.S. Army and U.S. Air Force officers in the grades of lieutenant colonel or colonel, and civilians of equivalent seniority from various federal agencies. This senior level professional military education program provides students with executive-level preparation for higher responsibilities as senior captains / colonels and as junior flag officers / general officers.[6]

The Henry E. Eccles Library, housed in Hewitt Hall, has created a collection of research guides covering a wide range of topics of interest for those studying international relations, foreign area studies, contemporary and historical military items of note, security studies, reference and research topics, and the like,[10] as well hosting additional support for staff, students, and faculty.,[11]

Over the years, the Naval War College has expanded greatly. The original building, the former Newport Asylum for the Poor, now serves as home to the Naval War College Museum. In 1892, Luce Hall was opened as the college's new home, at a cost of $100,000. At the time, the building housed lecture rooms and a library. Wings at either end provided two sets of quarters, occupied by the president of the College and members of the faculty. When the Naval War College was enlarged in 1932, this original building was renamed Luce Hall in honor of the institution's founder and first Superintendent (later President), Stephen B. Luce. This original pair of buildings was designated a National Historic Landmark in 1964, and listed on the National Register of Historic Places.[2][12] Luce Hall was again listed on the National Register in 1972.[1] 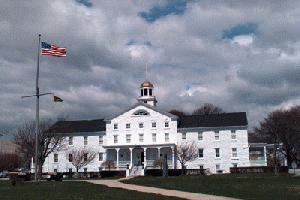 Mahan Hall, named for Rear Admiral Alfred Thayer Mahan (NWC President from 1886–1889 and 1892–1893), was completed and opened in 1904, and encompasses the historic Mahan Rotunda and Reading Room, as well as student study areas. The Mahan Rotunda also serves as an impromptu museum of gifts and artifacts donated by graduating international students over the years.

Pringle Hall (named for Vice Admiral Joel R. P. Pringle, NWC President from 1927–1930) was opened in 1934, and was the principal site for war gaming from the time of its completion in 1934 until the Naval Electronic Warfare Simulator was built in Sims Hall in 1957. The exterior facing of the building is pink Milford granite, similar in appearance to the ashlar granite of Luce Hall, to which it is connected by two enclosed bridges. Pringle Hall contains a 432-seat auditorium, the Quinn Lecture Room, the Naval Staff College, the Graphic Arts Studio, the Photography Branch, and the Naval War College Press.

In 1947, the NWC acquired an existing barracks building and converted it to a secondary war gaming facility, naming it Sims Hall after former War College President Admiral William Sowden Sims (NWC President from Feb. to Apr. 1917 and again from 1919–1922). In 1957 Sims Hall became the primary center for the Naval War College's wargaming department, serving as such until 1999.

The 1970s saw the War College's most active expansion, with the opening of three separate buildings. In 1972, Spruance Hall, named for former NWC President Admiral Raymond A. Spruance (March 1946 – July 1948), was completed, housing faculty offices and an 1,100 seat auditorium.

1976 saw the opening of Hewitt Hall, one of two Naval War College buildings not named for a War College president, this time taking its name from Admiral Henry Kent Hewitt, an advisor to the NWC during his tenure as Commander, U.S. Naval Forces Europe, following World War II. Hewitt Hall is home to the Henry E. Eccles Library, the Trident Café, the bookstore and barbershop, and student study areas and lounge.

In 1999, the state-of-the-art McCarty Little Hall opened, replacing Sims Hall as the War College's primary wargaming facility. The other building named for a non-president is named after Captain William McCarty Little, an influential leader and key figure in refining the techniques of war gaming. This high-tech facility is used primarily by the Center for Naval Warfare Studies to conduct war games and major conferences, and for research and analysis. The building features the technology necessary to support a variety of multi-media needs essential during multiple and simultaneous war games.

On June 6, 2014, NWC and Brown University's Watson Institute for International Studies signed a Research and Education Memorandum of Agreement (MOA) between the two institutions. The agreement promotes collaborative research and teaching between NWC and Brown, serves as an opportunity to establish and conduct programs to improve education in science-related fields to meet long-term national defense needs, and establishes cooperative education programs for undergraduate education at Brown and postgraduate education at both Brown and NWC.[13]