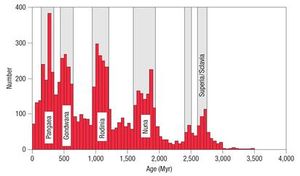 Nena was an ancient minor supercontinent that consisted of the cratons of Arctica, Baltica, and East Antarctica.

Nena formed about 1.8 billion years ago but became part of the global supercontinent Columbia around 1.1 billions of years ago.

Nena is an acronym that derives from Northern Europe and North America, but in contemporary research is often referred to as Nuna.

Nena as a continent has been associated with the Sudbury Basin Impact.