NetEase, Inc. (simplified Chinese: 网易; traditional Chinese: 網易; pinyin: Wǎng Yì) is a leading China-based Internet technology company founded in 1997 that pioneered the development of applications, services and other technologies for the Internet in China. NetEase is China’s largest e-mail service provider and as of June 30, 2015 has 790 million registered e-mail users and over 10,900 employees.

The company has grown rapidly since its founding in June 1997, thanks in part to its investment in search engine technology[5] and massively multiplayer online gaming. Fantasy Westward Journey, an MMORPG developed internally by NetEase, is an online game in China.

Ding Lei (Chinese: 丁磊; pinyin: Dīng Lěi, born October 1971), also known as William Ding, is the founder and CEO of NetEase. He made significant contributions to the development of computer networks in mainland China. According to Hurun Report's China Rich List 2013 he is the 25th wealthiest person in China with an estimated fortune of $4.2 billion. He was the wealthiest man in China at one point.[6]

Internet Media: Operating a broad and growing network of leading mobile applications, services and popular social communication platforms, as well as Internet portals with enriched content, enabling advertisers to reach one of the largest user bases in China.

E-mail Services: The largest provider of free e-mail services in China, giving great marketing value for advertisers who wish to reach our audience of consumers. 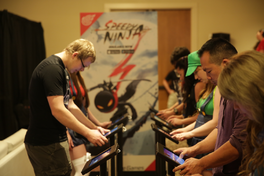 Gamers trying the new release of Speedy Ninja at PAX 2015

NetEase launched their first Western Headquarters in August 2014 bringing one of the largest tech companies in China to the US.[16] In 2015, NetEase North America, the San Francisco-based arm of the Chinese technology giant, announced a new funding initiative for independent developers. Known as the NetEase Success Fund, the scheme offers an alternative to traditional publishing by providing up to $500,000 for each accepted developer to fund marketing and advertising. Furthermore, developers awarded funding retain the rights, creative control, and full ownership of their products.

NetEase has an on-demand music-streaming service; 网易云音乐 (roughly "NetEase cloud music").[17] The service offers streaming from a vast library of music, and does not require first logging in. Since Grooveshark has been shut down, many people have been recommending this service.[18][19]