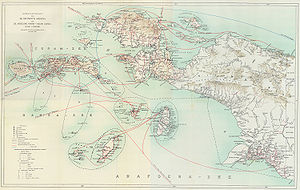 Netherlands New Guinea (Dutch: Nederlands-Nieuw-Guinea) refers to the West Papua region while it was an overseas territory of the Kingdom of the Netherlands from 1949 to 1962. Until 1949 it was a part of the Dutch East Indies. It was commonly known as Dutch New Guinea. It contained what are now Indonesia's two easternmost provinces, Papua and West Papua (administered under a unified government prior to 2003 under the name Irian Jaya).

Following the Vlakke Hoek incident, Indonesia launched a campaign of infiltrations designed to place pressure on the Dutch. Facing diplomatic pressure from the United States, fading domestic support and continual Indonesian threats to invade the territory, the Netherlands decided to relinquish control of the disputed territory in August 1962, agreeing to the Bunker Proposal on condition that a plebiscite to determine the final fate of the territory be conducted at a later date. The territory was administered by the UN temporarily before being transferred to Indonesia on 1 May 1963. A plebiscite, the Act of Free Choice, was eventually held in 1969 but the fairness of the election is disputed.

The Dutch established the 141st meridian as the eastern frontier of the territory. In 1898 the Netherlands Indies government decided to establish administrative posts in Fakfak and Manokwari, followed by Merauke in 1902. The main reason for this was the expansion of British and German control in the east. The Dutch wanted to make sure the United Kingdom and Germany would not move the border to the west. This resulted in the partition of the island of New Guinea.

In reality the most part of New Guinea remained outside colonial influence. Little was known about the interior; large areas on the map were white and the number of inhabitants of the island was unknown, and numerous explorations were made into the interior from the turn of the 20th century on. The indigenous inhabitants of New Guinea were Papuans, living in tribes. They were hunter-gatherers.

Pre-World War II economic activity was limited. Only coastal and island dwellers traded to some extent, mostly with the Maluku Islands. A development company was founded in 1938 to change this situation, but it was not very active. So, until World War II, New Guinea was a disregarded and unimportant territory within the Netherlands Indies.

Homeland for the Eurasians

The group that was most interested in New Guinea before the war were the Eurasians or Indo people. Before the war some 150,000 to 200,000 Eurasians were living in the Netherlands Indies. They were of mixed European and Indonesian descent and identified with the Netherlands and the Dutch way of life. In the colonial society of the Netherlands Indies, they held a higher social status than indigenous Indonesians ("inlanders"). They were mostly employed as office workers. As the educational level of indigenous Indonesians was on the rise, more and more Indonesians got jobs previously held by Eurasians. These had no other means of making a living, because, as Europeans, they were forbidden to buy land on Java. This situation caused mental and economic problems to the Eurasians. In 1923, the first plan to designate New Guinea as a settlement territory for Eurasians was devised. In 1926, a separate Vereniging tot Kolonisatie van Nieuw-Guinea (Association for the Settlement of New Guinea) was founded. In 1930, it was followed by the Stichting Immigratie Kolonisatie Nieuw-Guinea (Foundation Immigration and Settlement New Guinea). These organisations regarded New Guinea as an untouched, almost empty land that could serve as a homeland to the sidelined Eurasians. A kind of tropical Holland, where Eurasians could create an existence.

These associations succeeded in sending settlers to New Guinea and lobbied successfully for the establishment of a government agency to subsidise these initiatives (in 1938). However, most settlements ended in failure because of the harsh climate and natural conditions, and because of the fact the settlers, previously office workers, were not skilled in agriculture. The number of settlers remained small. In the Netherlands proper, some organisations existed that promoted a kind of "tropical Holland" in New Guinea, but they were rather marginal. They were linked to the NSB party and other fascist organisations. 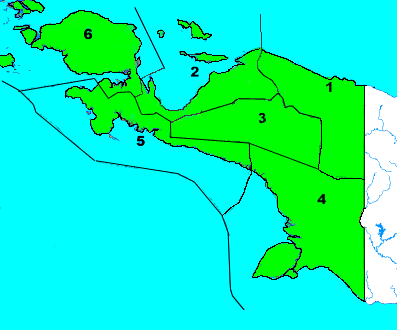 Origin of the dispute over New Guinea

In 1942, most parts of the Netherlands Indies were occupied by Japan.[1] Behind Japanese lines in New Guinea, Dutch guerrilla fighters resisted under Mauritz Christiaan Kokkelink.[2] During the occupation the Indonesian nationalist movement went through a rapid development. After Japan's surrender, Soekarno declared the Republik Indonesia, which was to encompass the whole of the Netherlands Indies. The Dutch authorities returned after several months under the leadership of Lieutenant-Governor-General Hubertus van Mook. Van Mook decided to reform Indonesia on a federal basis. This was not a completely new idea, but it was contrary to the administrative practice in the Netherlands Indies until then and contrary to the ideas of the nationalists, who wanted a centralist Indonesia.

Van Mook's plan was to divide Indonesia in several federal states, negaras, with possible autonomous areas, daerahs. The whole would be called the United States of Indonesia and would remain linked to the Netherlands in the Netherlands-Indonesian Union. The Indonesian side agreed to this plan during the Linggadjati conference in November 1946. Van Mook thought a federal structure would safeguard Indonesia's cultural and ethnic diversity. Van Mook and his supporters referred to the right of self-determination in this respect: the different ethnic communities of Indonesia should have the right to govern themselves. The ethnic diversity of Indonesia was previously discussed at two conferences in Malino and Pangkalpinang.

During these two conferences New Guinea was discussed for the first time. During the Malino conference a Papuan participant declared New-Guinea should become a part of the state of East Indonesia. During the Pangkalpinang conference the right of self-determination of the Eurasian, Chinese and Arab ethnic minorities was discussed. The new Grooter Nederland-Actie (Extended Netherlands Action) send delegates to this conference, who noted Eurasians should be able to retain their culture and position; some Eurasians mentioned New Guinea as a possible homeland for Eurasians. Furthermore, this conference stipulated specific territories could have special relations with the Kingdom of the Netherlands if they wanted to. However, the conference did not consider the indigenous Papuan population capable of exercising its right of self-determination.

The unilateral amendment of 'Linggadjati'

To many Dutchmen, the idea of parting with Indonesia was shocking. Many Dutch thought their country had a mission to develop Indonesia. The Indonesian wish for independence to many Dutch came as a complete surprise. Because Indonesian nationalists under Soekarno cooperated with the Japanese, they were branded as traitors and collaborators. Almost every Dutch political party was against Indonesian independence. The Protestant Anti-Revolutionary Party (ARP) were very supportive of the Dutch Ethical Policy in Indonesia. The newly established liberal VVD party campaigned for a hard-line policy against the nationalists. Even the Dutch Labour Party, which supported Indonesian independence in principle, was hesitant, because of the policies of Soekarno.

Minister of Colonies Jan Anne Jonkman defended the Linggadjati Agreement in Parliament in 1946 by stating that the government wished for New Guinea to remain under Dutch sovereignty, arguing it could be a settlement for Eurasians. Probably he thought up this argument himself. A motion entered by the Catholic KVP and the Labour Party, which was accepted by parliament, stated that the declaration of Jonkman in parliament should become a part of the Linggadjati agreement. Duly accepted, the Netherlands thus unilaterally 'amended' the Linggadjati agreement to the effect that New Guinea would remain Dutch. Labour parliamentary group leader Marinus van der Goes van Naters said afterwards the Labour party entered the motion with the KVP because it feared the Catholics otherwise might reject the Linggadjati agreements.

The Indonesians did not accept this unilateral amendment. In order not to jeopardise the scheduled transfer of sovereignty, the Indonesian vice-president Mohammad Hatta offered to maintain Dutch sovereignty over New Guinea for one year and reopen the negotiations afterwards.

Thus in 1949, when the rest of the Dutch East Indies became fully independent as Indonesia, the Dutch retained sovereignty over western New Guinea, and took steps to prepare it for independence as a separate country. Some five thousand teachers were flown there. The Dutch put an emphasis upon political, business, and civic skills. On 8 February 1950 Stephan Lucien Joseph van Waardenburg was appointed the first Governor (De Gouverneur) of Netherlands New Guinea. The first local naval cadets graduated in 1955 and the first army brigade become operational in 1956.

Tensions regarding the Dutch-Indonesian dispute over Netherlands New Guinea escalated in December 1957 following Indonesia's defeat in the UN General Assembly on 29 November 1957 to pass a resolution in favour of Indonesia's claim to the territory. Sukarno responded by allowing the seizure of Dutch enterprises operating in Indonesia and announcing the intended expulsion of Dutch residents from Indonesia. The increased tensions surrounding the dispute encouraged the Dutch to accelerate their plans to move the disputed territory towards an act of self-determination. Elections were held across Netherlands New Guinea in 1959 and an elected New Guinea Council officially took office on 5 April 1961, to prepare for full independence by the end of that decade. The Dutch endorsed the council’s selection of a new national anthem and the Morning Star as the new national flag on 1 December 1961.[3][4]

Following the raising of the Papuan National Flag on 1 December 1961, tensions further escalated. On 18 December 1961 Sukarno issued the Tri Komando Rakjat, (Triple Command of the Indonesian People), calling the Indonesian people to defeat the formation of an independent state of West Papua, raise the Indonesian flag in that country, and be ready for mobilisation at any time.[5][6]

In 1962 Indonesia launched a significant campaign of airborne and seaborne infiltrations against the disputed territory, beginning with a seaborne infiltration launched by Indonesian forces on 15 January 1962. The Indonesian attack was comprehensively defeated by Dutch forces including the Dutch destroyers Evertsen and Kortenaer, the so-called Vlakke Hoek incident.[7] Amongst the casualties was the Indonesian Deputy Chief of the Naval Staff; Commodore Yos Sudarso. Unbeknown to the Indonesians, Dutch Signals Intelligence had been able to intercept Indonesian communications, allowing Dutch forces to successfully anticipate Indonesia's infiltration attempts throughout 1962.[8] Forced to regroup, the Indonesians relaunched their campaign of infiltrations in March 1962. In the coming months over 500 Indonesian paratroops and special forces were covertly inserted into Netherlands New Guinea, only to be decisively defeated by Dutch forces with the assistance of the indigenous population.[9]

Facing mounting international diplomatic pressure and the prospect of an Indonesian invasion force, the Dutch conceded to re-entering negotiations and agreed to the Ellsworth Bunker proposal on 28 July 1962, for a staged transition from Dutch to Indonesian control via UN administration, on the condition that a plebiscite would be held in future in the territory.[10] The agreement was signed on 15 August 1962 at the UN Headquarters in New York and the territory was placed under the United Nations Temporary Executive Authority in October 1962. It was subsequently transferred to Indonesia in May 1963.

The territory was formally annexed by Indonesia in 1969 after the Indonesian Government conducted an event termed the Act of Free Choice, which under strong pressure from the Indonesian military, unanimously "approved" the annexation. This Act of Free Choice has been strongly criticised by the international community, including the group International Parliamentarians for West Papua, which has termed the act "the act of no choice". Since then the Indonesian government has endorsed a policy of immigration by people from Java and other islands called Transmigrasi.