From Infogalactic: the planetary knowledge core
Jump to: navigation, search
This article is about the historical Network Access Points. For the modern version, see Internet Exchange Point.
Not to be confused with Wireless access point. 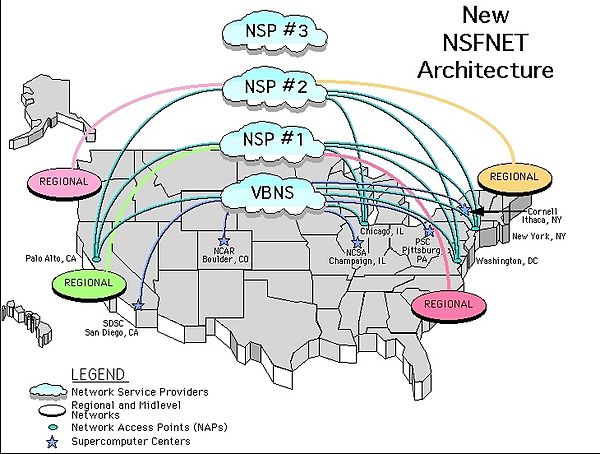 A Network Access Point (NAP) is a public network exchange facility where Internet service providers (ISPs) connected with one another in peering arrangements. The NAPs were a key component in the transition from the 1990s NSFNET era (when many networks were government sponsored and commercial traffic was prohibited) to the commercial Internet providers of today. They were often points of considerable Internet congestion.

The four Network Access Points (NAPs) were defined under the U.S. National Information Infrastructure (NII) document as transitional data communications facilities at which Network Service Providers (NSPs) would exchange traffic, in replacement of the publicly financed NSFNET Internet backbone.[1] The National Science Foundation let contracts supporting the four NAPs, one to MFS Datanet for the preexisting MAE-East in Washington, D.C., and three others to Sprint, Ameritech, and Pacific Bell, for new facilities of various designs and technologies, in New York (actually Pennsauken, New Jersey), Chicago, and California, respectively.[2] As a transitional strategy, they were effective, giving commercial network operators a bridge from the Internet's beginnings as a government-funded academic experiment, to the modern Internet of many private-sector competitors collaborating to form a network-of-networks, anchored around Internet Exchange Points.

This was particularly timely, coming hard on the heels of the ANS CO+RE controversy,[3][4] which had disturbed the nascent industry, led to congressional hearings,[5] resulted in a law allowing NSF to promote and use networks that carry commercial traffic,[6] prompted a review of the administration of NSFNET by the NSF's Inspector General (no serious problems were found),[7] and caused commercial operators to realize that they needed to be able to communicate with each other independent of third parties or at neutral exchange points.

Today, the phrase "Network Access Point" is of historical interest only, since the four transitional NAPs disappeared long ago, replaced by modern IXPs, though in Spanish-speaking Latin America, the phrase lives on to a small degree, among those who conflate the NAPs with Internet Exchange Points (IXPs).