The Nevada Air National Guard is headquartered at the Nevada Joint Force Headquarters, Fallon, and its commander is currently[update] Brigadier General David Snyder.

Under the "Total Force" concept, Nevada Air National Guard units are considered to be Air Reserve Components (ARC) of the United States Air Force (USAF). Nevada ANG units are trained and equipped by the Air Force and are operationally gained by a Major Command of the USAF if federalized. In addition, the Nevada Air National Guard forces are assigned to Air Expeditionary Forces and are subject to deployment tasking orders along with their active duty and Air Force Reserve counterparts in their assigned cycle deployment window.

Along with their federal reserve obligations, as state militia units the elements of the Nevada ANG are subject to being activated by order of the Governor to provide protection of life and property, and preserve peace, order and public safety. State missions include disaster relief in times of earthquakes, hurricanes, floods and forest fires, search and rescue, protection of vital public services, and support to civil defense.

Overall, the Nevada Air National Guard maintains a presence in three of the state’s 17 counties with a 64-acre (260,000 m2) site on the southwest corner of the Reno-Tahoe International Airport in Reno, a detachment on Nellis Air Force Base in Las Vegas and at Creech Air Force Base in Indian Springs. About 65 Nevada Guard airmen work at the southern-Nevada detachment that began operation in 2005.

A joint force unit comprising 22 soldiers and airmen headquartered at Nellis Air Force Base, Las Vegas. The unit, for Weapons of mass destruction, began operation in late 2004 and promises to be an important resource and asset to the state should a domestic chemical, biological or nuclear event occur. 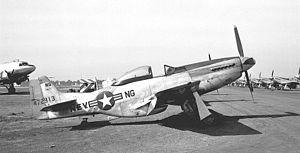 The Nevada Air National Guard origins date to the formation of the 192d Fighter Squadron at Reno Air Force Base, receiving federal recognition on 12 April 1948. It was equipped with F-51D Mustangs and its mission was the air defense of the state. On 19 April 1958 the 192d Fighter-Interceptor Squadron was authorized to expand to a group level, and the 152d Fighter-Interceptor Group was allotted by the National Guard Bureau, extended federal recognition and activated.

Today, the 152d Airlift Wing has a primary wartime mission of providing rapid airlift and airdrop of cargo and troops. They can also fly reconnaissance missions in support of military command and control operations, counter drug operations, disaster relief and photo mapping for federal and state agencies. The 232d Operations Squadron at Creech Air Force Base, Indian Springs is an associate unit of the USAF 432d Wing, operating the MQ-1 Predator UAV reconnaissance aircraft. The 92d Civil Support Team is trained in WMD response.

After the September 11th, 2001 terrorist attacks on the United States, elements of every Air National Guard unit in Nevada has been activated in support of the Global War on Terrorism. Flight crews, aircraft maintenance personnel, communications technicians, air controllers and air security personnel were engaged in Operation Noble Eagle air defense overflights of major United States cities. Also, Nevada ANG units have been deployed overseas as part of Operation Enduring Freedom in Afghanistan and Operation Iraqi Freedom in Iraq as well as other locations as directed.