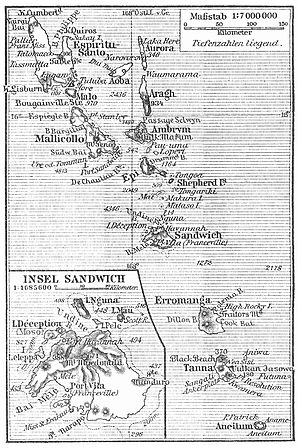 New Hebrides, named for the Hebrides Scottish archipelago, was the colonial name for the island group in the South Pacific Ocean that now is the nation of Vanuatu. Native people had inhabited the islands for three thousand years before the first Europeans arrived in 1606 from a Spanish expedition led by Pedro Fernandes de Queirós. The islands were colonized by both the British and French in the 18th century, shortly after Captain James Cook visited the islands.

The two countries eventually signed an agreement making the islands an Anglo-French condominium, which divided the New Hebrides into two separate communities: one Anglophone and one Francophone. This divide continues even after independence, with schools either teaching in one language or the other, and between different political parties. The condominium lasted from 1906 until 1980, when the New Hebrides gained their independence as Vanuatu.

The New Hebrides was a rare form of colonial territory in which sovereignty was shared by two powers, Britain and France, instead of just one. Under the Condominium there were three separate governments – one French, one British, and one joint administration that was partially elected after 1975.

The French and British governments were called residencies, each headed by a resident appointed by the metropolitan government. The residency structure greatly emphasized dualism, with both consisting of an equal number of French and British representatives, bureaucrats and administrators. Every member of one residency always had an exact mirror opposite number on the other side who they could consult. The symmetry between the two residencies was almost exact.

The joint government consisted of both local and European officials. It had jurisdiction over the postal service, public radio station, public works, infrastructure, and censuses, among other things. The two main cities of Santo and Port Vila also had city councils, but these did not have a great deal of authority.[clarification needed]

Local people could choose whether to be tried under the British common law or the French civil law. Visitors could choose which immigration rules to enter under. Nationals of one country could set up corporations under the laws of the other. In addition to these two legal systems, a third Native Court existed to handle cases involving Melanesian customary law. There was also a Joint Court, composed of British and French judges. The President of the Joint Court was appointed by the King of Spain until 1939 when the post was abolished after the retirement of the last President, partly due to the abolition of the Spanish monarchy in 1931.[1]

There were two prison systems to complement the two court systems. The police force was technically unified but consisted of two chiefs and two equal groups of officers wearing two different uniforms. Each group alternated duties and assignments.