Cook claimed New Zealand for Britain on his arrival in 1769. The establishment of British colonies in Australia from 1788 and the boom in whaling and sealing in the Southern Ocean brought many Europeans to the vicinity of New Zealand. Whalers and sealers were often itinerant and the first real settlers were missionaries and traders in the Bay of Islands area from 1809. Some of the early visitors stayed and lived with Māori tribes as Pākehā Māori. Often whalers and traders married Māori women of high status which served to cement trade and political alliances as well as bringing wealth and prestige to the tribe.[4] By 1830 there was a population of about 800 non Māori which included a total of about 200 runaway convicts and seamen. The seamen often lived in New Zealand for a short time before joining another ship a few months later. In 1839 there were 1100 Europeans living in the North Island. Violence against European shipping (mainly due to mutual cultural misunderstandings), the ongoing musket wars between Māori tribes (due to the recent relatively sudden introduction of firearms into the Maori world), cultural barriers and the lack of an established European law and order made settling in New Zealand a risky prospect. By the late 1830s the average missionary would tell you that many Māori were nominally Christian, many of the Māori slaves that had been captured during the Musket Wars had been freed and cannibalism had been largely stamped out. By this time, many Māori, especially in the north, could read and write Māori and to a lesser extent English.

File:Canterbury province plaque Whitehall London.jpg
Plaque commemorating the first meeting of the Canterbury Association in Charing Cross, London. The Association would go on to found Canterbury, New Zealand in 1850.

European migration has resulted in a deep legacy being left on the social and political structures of New Zealand. Early visitors to New Zealand included whalers, sealers, missionaries, mariners, and merchants, attracted to natural resources in abundance. They came from the Australian colonies, Great Britain and Ireland, Germany (forming the next biggest immigrant group after the British and Irish),[10] France, Portugal, the Netherlands, Denmark, The United States, and Canada.

In 1840 representatives of the British Crown signed the Treaty of Waitangi with 240 Māori chiefs throughout New Zealand, motivated by plans for a French colony at Akaroa and land purchases by the New Zealand Company in 1839. British sovereignty was then proclaimed over New Zealand in May 1840. Some would later argue that the proclamation of sovereignty was in direct conflict with the treaty which in its Maori version had guaranteed sovereignty (Rangatiratanga) to the Maori who signed it.[11] By the end of the 1850s the European and Mäori populations were of a similar size as immigration and natural increase boosted European numbers.

Following the formalising of British sovereignty, the organised and structured flow of migrants from Great Britain and Ireland began. Government-chartered ships like the clipper Gananoque and the Glentanner carried immigrants to New Zealand. Typically clipper ships left British ports such as London and travelled south through the central Atlantic to about 43 degrees south to pick up the strong westerly winds that carried the clippers well south of South Africa and Australia. Ships would then head north once in the vicinity of New Zealand. The Glentanner migrant ship of 610 tonnes made two runs to New Zealand and several to Australia carrying 400 tonne of passengers and cargo. Travel time was about 3 to 3 1/2 months to New Zealand. Cargo carried on the Glentanner for New Zealand included coal, slate, lead sheet, wine, beer, cart components, salt, soap and passengers' personal goods. On the 1857 passage the ship carried 163 official passengers, most of them government assisted. On the return trip the ship carried a wool cargo worth 45,000 pounds.[12] In the 1860s discovery of gold started a gold rush in Otago. By 1860 more than 100,000 British and Irish settlers lived throughout New Zealand. The Otago Association actively recruited settlers from Scotland, creating a definite Scottish influence in that region, while the Canterbury Association recruited settlers from the south of England, creating a definite English influence over that region.[13] In the 1860s most migrants settled in the South Island due to gold discoveries and the availability of flat grass covered land for pastoral farming. The low number of Māori (about 2,000) and the absence of warfare gave the South Island many advantages. It was only when the New Zealand wars ended that The North Island again became an attractive destination.

In the 1870s the MP Julius Vogel borrowed millions of pounds from Britain to help fund capital development such as a nationwide rail system, lighthouses, ports and bridges, and encouraged mass migration from Britain. By 1870 the non-Māori population reached over 250,000.[14] Other smaller groups of settlers came from Germany, Scandinavia, and other parts of Europe as well as from China and India, but British and Irish settlers made up the vast majority, and did so for the next 150 years.

The apparent drop in this figure was due to Statistics New Zealand's acceptance of 'New Zealander' as a distinct response to the ethnicity question and their placement of it within the "Other" ethnic category, along with an email campaign asking people to give it as their ethnicity in the 2006 Census.[21]

In previous censuses, these responses were counted belonging to the European New Zealanders group,[22] and Statistics New Zealand plans to return to this approach for the 2011 Census.[23] Eleven percent of respondents identified as New Zealanders in the 2006 Census (or as something similar, e.g. "Kiwi"),[24] well above the trend observed in previous censuses, and higher than the percentage seen in other surveys that year.[25]

In April 2009, Statistics New Zealand announced a review of their official ethnicity standard, citing this debate as a reason,[26] and a draft report was released for public comment. In response, the New Zealand Herald opined that the decision to leave the question unchanged in 2011 and rely on public information efforts was "rather too hopeful", and advocated a return to something like the 1986 approach. This asked people which of several identities "apply to you", instead of the more recent question "What ethnic group do you belong to?"[27]

The term Pākehā, the etymology of which is unclear,[28] is used interchangeably with European New Zealanders. The 1996 census used the wording "New Zealand European (Pākehā)" in the ethnicity question, however the word Pākehā was subsequently removed after what Statistics New Zealand called a "significant adverse reaction" to its use to identify ethnicity.[29] In 2013, the New Zealand Attitudes and Values Study carried out by The University of Auckland found no evidence that the word was derogatory, although only 14% of the overall respondents chose to identify as Pākehā with the remainder preferring New Zealander, New Zealand European or simply Kiwi.[30][31]

The term "Palagi", pronounced Palangi, is Samoan in origin and is used in similar ways to Pākehā, usually by people of Samoan or other Pacific Island descent.

The New Zealand 2006 census statistics reported citizens with British (27,192), English (44,202), Scottish (15,039), Irish (12,651), Welsh (3,771) and Celtic (1,506) origins. Historically, a sense of 'Britishness' has figured prominently in the identity of many New Zealanders.[32] As late as the 1950s it was common for New Zealanders to refer to themselves as British, such as when Prime Minister Keith Holyoake described Sir Edmund Hillary's successful ascent of Mt. Everest as "[putting] the British race and New Zealand on top of the world".[33] New Zealand passports described nationals as "British Subject and New Zealand Citizen" until 1974, when this was changed to "New Zealand Citizen".[34]

While "European" identity predominates political discourse in New Zealand today, the term "British" is still used by some New Zealanders to explain their ethnic origins. Others see the term as better describing previous generations; for instance, journalist Colin James referred to "we ex-British New Zealanders" in a 2005 speech.[35] It remains a relatively uncontroversial descriptor of ancestry. 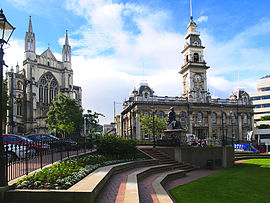 There are many places in New Zealand named after people and places in Europe, especially the United Kingdom and Holland as a result of the many English, Scottish, Welsh, Irish, Dutch and other European settlers and explorers. These include the name "New Zealand" itself, as described below, along with several notable cities and regions: