Newport is the county seat of Lincoln County.[7] It is also the home of the Oregon Coast Aquarium, Hatfield Marine Science Center, Nye Beach, Yaquina Head Lighthouse, and Rogue Ales.

Newport has mild, wet weather throughout the year with the heaviest precipitation falling during the winter months. The city averages 0.4 days annually with maximum temperatures of 90 °F (32 °C) or higher and 29 days with minimum temperatures of 32 °F (0 °C) or lower.[8] Historic extreme temperatures have varied between 1 °F (−17 °C) in winter and 100 °F (38 °C) in summer.[8]

In October 1962, wind gusts at Newport reached 138 miles per hour (222 km/h) before the wind gauge stopped working. This occurred during the Columbus Day Windstorm, which the National Weather Service has named one of Oregon's top 10 weather events of the 20th century.[9]

Another top-10 event affecting Newport occurred in December 1964, when a rainstorm caused severe flooding in many parts of the state. The Weather Service rated the storm among the most severe in western Oregon since the 1870s. About 21 inches (530 mm) of rain fell on Newport. This was almost twice the normal amount expected in December and set a new record for the city.[9]

Also in the Weather Bureau's top-10 list for Oregon are the snowstorms of January 1950. Newport, where annual snowfall averages about 1.6 inches (4 cm), a total of about 6 inches (15 cm) fell during the month.[9]

There were 4,354 households of which about 25% had children under the age of 18 living with them, 41% were married couples living together, 11% had a female householder with no husband present, 5% had a male householder with no wife present, and 43% were non-families. About 35% of all households were made up of individuals, and about 15% had someone living alone who was 65 years of age or older. The average household size was about 2.2 and the average family size was about 2.8.

Of 4,112 households, about 27% had children under the age of 18 living with them, 47% were married couples living together, 13% had a female householder with no husband present, and 39% were non-families. About 32% of all households were made up of individuals and 13% had someone living alone who was 65 years of age or older. The average household size was about 2.3 and the average family size was about 2.8.

In August 2011, the National Oceanic and Atmospheric Administration moved its base for research ships from Seattle to Newport. The base has about 110 marine officers and a total of 175 employees. It bases four ships and provides support for up to two itinerant vessels.[17] NOAA has some personnel at the Hatfield Marine Science Center which support the fisheries science centers for Alaska and the Northwest. The ships will join the RV Oceanus and RV Elakha, research vessels based at the center.

Newport is also home to the Hatfield Marine Science Center, operated by Oregon State University in collaboration with state and federal agencies. The center conducts research and educational programs associated with the marine environment and serves as a primary field station for the university's College of Oceanic and Atmospheric Sciences.

Newport has several stations: KNPT, with a news/talk format, KSHL, which plays country music, and KPPT, which plays classics from the 1960s, 1970s and 1980s. News and information can be found at KCUP.

Newport has one sister city: 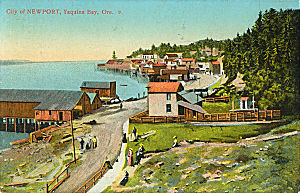 Newport bayfront as seen in the mid-1910s.