From Infogalactic: the planetary knowledge core
Jump to: navigation, search
This article is about the town. For the borough, see Newtown (borough), Connecticut.

Newtown is a town in Fairfield County, Connecticut, United States. It is part of the greater Danbury metropolitan area as well as the New York metropolitan area. Newtown was founded in 1705 and later incorporated in 1711. As of the 2010 census, its population was 27,560.[1]

In 1705, English colonists purchased the Town site from the Pohtatuck Indians, a branch of the Pasgussett. It was originally known as Quanneapague. Settled by migrants from Stratford and incorporated in 1711, Newtown residents had many business and trading ties with the English. It was a stronghold of Tory sentiment during the early Revolutionary War. Late in the war, French General Rochambeau and his troops encamped here in 1781 during their celebrated march on their way to the siege of Yorktown, Virginia, which ended the Revolution.[citation needed]

An important crossroads throughout its early history, the village of Hawleyville briefly emerged as a railroad center. The town's population grew to over 4,000 circa 1881. In the following decades, the population dwindled to a low of 2,635 in 1930 before again growing.[citation needed]

Local industry has included the manufacture of furniture, tea bags, combs, fire hoses, folding boxes, buttons, and hats, as well as farming, and mica and feldspar mining. The game of "Scrabble" was developed here by James Brunot.[3]

From the period of highway development and suburbanization following World War II, the town has developed as a suburb of Danbury, with many people also commuting to Norwalk, Stamford, and Bridgeport.

In November 1986, Helle Crafts was killed by her husband Richard Crafts in the infamous "Woodchipper Murder".

On December 14, 2012[update], Adam Lanza shot his mother at home and then went to Sandy Hook Elementary School where he killed 26 people (20 children and 6 faculty and staff) before killing himself.[4] It was the second-deadliest[update] mass shooting in U.S. history, after the 2007 Virginia Tech shootings.[5][6]

The northeastern border of the town is a natural border that follows the Housatonic River.

There were 8,325 households out of which 44.7% had children under the age of 18 living with them, 73.3% were married couples living together, 5.8% had a female householder with no husband present, and 18.6% were non-families. 14.8% of all households were made up of individuals and 5.8% had someone living alone who was 65 years of age or older. The average household size was 2.90 and the average family size was 3.24.

The town of Newtown offers many programs for area residents. Numerous parks and fields offer playgrounds, swimming, tennis, softball, baseball, volleyball, lacrosse, soccer, as well as a nature center and trails. Prominent Newtown parks include Treadwell Park, Dickinson Park, and Collis P. Huntington State Park. Treadwell Park, named after former selectman Timothy Treadwell, contains recreation facilities and the town pool. Dickinson park used to contain a swimming pool, which was a large asphalt-lined bowl-shaped depression surrounded by a grass "beach". It was a uniquely safe design for children because there was no "deep end"; however, it lacked a formal filtration system and required attendants to periodically row out and manually add chlorine to the water. The asphalt was removed and the pond pool filled with earth in 2006.

In Connecticut politics, the town of Newtown is required to have both a Democratic and a Republican Town Committee.[10][11] The Town Committee members vote on which candidates to endorse for public elections. Elected to a two-year term, the Board of Selectmen supervise the administration of the affairs of the town, except those matters which by the General Statute or Town Charter are exclusively committed to the Board of Education or other departments. They are led by a First Selectman, who is the Chief Executive and Administrative Officer of the town. The Board of Selectmen with the assistance of the departments and boards and commission prepares the annual budget in February. The Legislative Council of 12 members (elected to the same two year terms) acts as the Board of Finance and passes ordinances. The Council recommends the annual education and general government budget to the towns people. The old fashion town meeting and referendum are used to pass the budget. These procedures are set forth in the Town Charter adopted and reviewed by the citizens.

The Borough of Newtown occupies about 1,252 acres (5.07 km2) (or roughly two square miles) in the central part of town. Incorporated in 1824 by an act of the Connecticut General Assembly, it is one of only nine boroughs in the state. The borough adopted zoning for the town center long before the rest of the community. The lot sizes are smaller than the minimum 1-acre (4,000 m2) lots of the rest of the community. The borough also has running public water provided by a small town water company.[clarification needed] Much of the borough is sewered, whereas most of the rest of the town has wells and septic systems.[12]

The Newtown Police Department has existed since 1970. It is located on 3 Main Street near Rams Pasture, the park used for town celebrations. The police chief is Michael Kehoe and the commander of the department is Joe Rios.[13] The department has 45 sworn officers in uniform.[14]

Newtown has a number of local landmarks. The flagpole, first erected in 1876, now stands in the center of Main Street. The Newtown Bee, the local weekly newspaper, has been serving the area since 1877, and has been owned and operated by the Smith family since 1881. Across from the flagpole is Newtown Meeting House, which served as the town's Congregational church for many years. The rooster weather vane (a town symbol), located atop the meeting house, is said to have been used as a target by French soldiers encamped here in 1781 during the Revolutionary War.

Newtown is the site of the Fairfield Hills State Hospital, an asylum constructed in the 1930s and closed in 1995. The hospital was used as the set of the juvenile facility in the film Sleepers in 1995.

In the 21st century, Newtown purchased the property and, as of 2007, was considering a controversial plan for redevelopment. In 2008, the NYA (Newtown Youth Academy) began to operate there; extracurricular amenities include a fitness section, basketball courts, and a turf field. 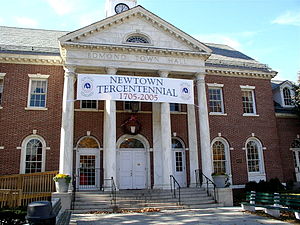 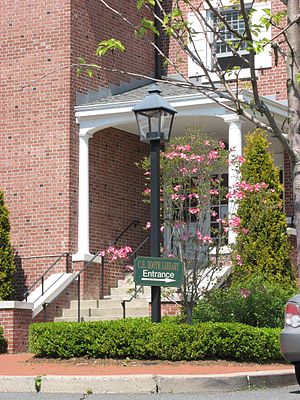 Constructed in 1930 by a private benefactress for the community, the Town Hall is used for public-private purposes. Offices for the town are located there. The facility also has available for private rental the Alexandria Room for weddings, parties and recitals; and smaller meeting rooms that can be reserved by community groups. A gymnasium is used for community sports events, as well as private parties, and art or craft shows.

The Edmond Town hall is notable for its cinema. The theater shows popular films shortly after they leave mainstream theaters. It is the only $2 film theater in Connecticut. It is a popular spot for middle school and high school students. The "Live at the Edmond Town Hall" concert series was created by Newtown resident Hayden Bates in 2009. All proceeds are put towards aiding the Edmond's theater upgrades. Headliners have included The Low Anthem, The Bill Frisell and Sam Amidon Duo, Brown Bird and Phosphorescent.

The Board of Managers of the Hall is composed of six members serving six-year terms. At each regular Town Election, two members are elected, who must represent different political parties. According to Town Charter, the Board "shall have the exclusive care and maintenance of Edmond Town Hall and all grounds and buildings appurtenant thereto, together with all powers and duties prescribed for said Board by Special Act No. 98 of the 1931 session by which it was created, as amended by Special Act No. 517 of the 1953 session".

The architect was Philip Sutherland, who also designed Cyrenius H. Booth Library. The Town Hall was constructed for the community by a local benefactress Mary Elizabeth Hawley and dedicated in 1930. The building was named for Miss Hawley’s maternal great-grandfather Judge William Edmond.

Newtown's public library was opened December 17, 1932, with a capacity for 25,000 volumes. The library is a posthumous gift of Mary Elizabeth Hawley. She named it for her maternal grandfather, a doctor in town from 1820 until his death in 1871. Hawley's gift paid for construction of the building, and an endowment, a trust fund of about $250,000. As a result, the town did not have to provide any financial support to the library until the 1980s.[15]

Designed by Philip Sutherland, the building was considered one of the most modern libraries of its time, with several innovative features. The building was fireproof, had cork floors and acoustic ceiling tiles to deaden sound, and had a built-in humidifying unit and a centralized vacuum cleaner.[15]

In January 1998 an addition to the rear of the building was completed and officially opened. The expansion doubled the available floor space. It provides areas for meetings and displays of art and local historical artifacts from the library's large collection.[15]

Of the residents of Newtown, many commute to jobs in Manhattan, Hartford, and Stamford.[16] One portion of Newtown has many white collar workers who are employed at General Electric, IBM, Pepsi, and other companies; and doctors.[17]

Notable residents have included James Purdy, who ministered to smallpox victims during the American Civil War;[21] Mary Elizabeth Hawley, Newtown's benefactress;[22] Joseph F. Engelberger, an engineer and entrepreneur who is often credited with being the "Father of Robotics" – the Robotics Industries Association annually presents the Joseph F. Engelberger Awards to "persons who have contributed outstandingly to the furtherance of the science and practice of robotics."; and Caitlyn Jenner (then Bruce),[lower-alpha 1] 1976 Summer Olympics decathlon gold medalist, attended Newtown High School. This list includes individuals who were born, died, resided (for all or part of their lives), worked, and/or attended school in Newtown, CT or one of its communities.

Other notable residents (in alphabetical order):