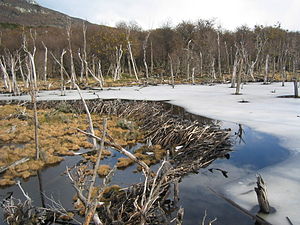 Niche construction is the process in which an organism alters its own (or other species') environment, often but not always in a manner that increases its chances of survival. Changes that organisms bring about in their worlds that are of no evolutionary or ecological consequence are not examples of niche construction.[1] Several biologists have argued that niche construction is as important to evolution as natural selection (i.e., not only does an environment cause changes in species through selection, but species also cause changes in their environment through niche construction).[2] This back-and-forth creates a feedback relationship between natural selection and niche-construction: when organisms affect their environment, that change can then cause a shift in what traits are being naturally selected for.[3] The effect of niche construction is especially pronounced in situations where environmental alterations persist for several generations, introducing the evolutionary role of ecological inheritance. Less drastic niche-constructing behaviors are also quite possible for an organism. This theory, in conjunction with natural selection, shows that organisms inherit two legacies from their ancestors: genes and a modified environment. Together, these two evolutionary mechanisms determine a population's fitness and what adaptations those organisms develop in the continuation for their survival. 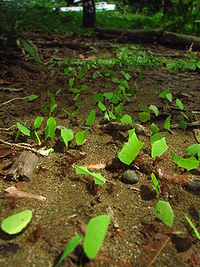 Leafcutter Ants fill a vital niche in the rainforest ecosystem

Niche construction has many implications for the human sciences, more specifically human sociobiology, evolutionary psychology, and human behavioral ecology. Standard evolutionary theory only allows for cultural processes to affect genetic evolution by influencing the individual, and depends on the ability of that individual to survive and pass on its genes to the next generation. Cultural processes are viewed merely as an aspect of the human phenotype and are not believed to be consequential to human evolution. Cultural diversity is believed to reflect variation in the environments that different populations of humans evolved in, and nothing else. This theory overlooks the fact that humans can modify their selective environments through cultural activity, thus feeding back to affect selection.[7] "Cultural processes add a second knowledge inheritance system to the evolutionary process through which socially learned information is accrued, stored, and transmitted between individuals both within and between generations."[7]

With the addition of language to the human culture came an increased mental capacity. This allowed for human adaptation of the environment to be a learned process, unlike nonhuman species, whose adaptive process is instinctual. This resulted in the acceleration of environmental, behavioral and genetic modifications. As niche construction advocate Derek Bickerton writes, "We could construct our niches without having to wait on interminable rounds of feedback between genes and behavior."[8]

A theory on gene-culture coevolution calls for a more integrated relationship between genetic evolution and cultural processes than standard evolutionary theory. In this model, cultural activities are believed to affect the evolutionary process by modifying selection pressures. In other words, cultural change has the capacity to codirect its population's genetic evolution. Mathematical and conceptual models including investigations of language, handedness, the emergence of incest taboos, the coevolution of hereditary deafness and sign language, and sexual selection with a culturally transmitted mating preference demonstrate this theory. However, this theory is still dependent on standard evolutionary theory because it requires that cultural processes only affect genes directly, not allowing for any intermediate factors in the environment to interact with these processes at an evolutionary level. This theory exists on a dual inheritance system consisting solely of genes and cultural activity. "The dual inheritance system is a way to include interactions between nature and nurture in a tractable system."[7] In most cases this theory works smoothly, however there are instances where cultural activities create changes in the abiotic environment that then affect selection pressures.[7]

The speed at which humans are able to construct niches modifies the selection pressures and either genetic evolution or further niche construction can result.[9] An example of genetic evolution through niche construction with the inclusion of an abiotic factor: Yam cultivators in West Africa cut clearings in forests to grow crops, but resulted in much standing water which attracted mosquitoes and increased the rate of malaria. This caused a modification to the selection pressure for the sickle-cell allele that protects against malaria. Evolutionary change is thus furthered. Example of further niche construction: Humans change the environment through pollution. The effects of pollution are alleviated by the innovation and use of a new technology. This cultural response to a constructed niche allows for a change in environment and a lack of change in genetics. Only if a new technology is not created or effective will evolutionary change occur. Humans are able to sustain adaptiveness by responding to ancestral niche construction through further cultural niche construction.[9]

The addition of niche construction to the study of evolutionary processes forces scientists to accept that cultural activity is not the reason that humans are able to modify their environments, but is simply their primary means of doing the same thing that other species do. The fact that a large number of cultural processes are learned rather than genetically encoded into the individual, makes human culture an incredibly powerful method of niche construction. "Most of the time, cultural processes can be regarded as a shortcut to acquiring adaptive information, as individuals rapidly learn, or are shown, what to eat, where to live, or how to avoid danger by doing what other more knowledgeable individuals do."[7]

The development of sickle cells is believed to have been partially the result of the increased mosquito/malaria rates brought about by standing water from yam cultivation in Africa. 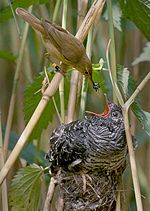 As creatures move into new niches, they can have a significant effect on the world around them. The first consequence that arises from niche construction is that the organisms have changed the environment on which they live. A good example of this is the leafcutter ants mentioned above. Leafcutter colonies can grow to massive sizes and contain millions of individuals. Such a large amount of ants require a large food supply. In order to obtain this, ants need to stockpile a large amount of foliage clippings to feed their crop of fungi. This can devastate surrounding plant life, especially young saplings that need to obtain all the sunlight they can in the rainforests.

Another important consequence is that they can affect natural selection pressures put on a species. The common cuckoo bird is an excellent example of such a consequence. This species of bird parasitizes other birds by laying their eggs in the other species' nests. This had led to several adaptations among the cuckoos, one of which is a short incubation time for their eggs. The eggs need to hatch first so that the chick can push the other species' eggs out of the nest, ensuring it has no competition for the parents' attention. Another adaptation it has acquired is that the chick mimics the calls of multiple young chicks, so that the parents are bringing in food not just for one offspring, but a whole brood.[10]

Proponents of the NCT call for an extended evolutionary synthesis.[12][13] Laubichler and Jürgen, 2015 argue that niche construction theory offers the study of a broader range of evolutionary phenomena "the notion of expanded and multiple inheritance systems (from genomic to ecological, social and cultural)."[13]