From Infogalactic: the planetary knowledge core
Jump to: navigation, search
This article is about the crater on Mars. For other craters named Nicholson, see Nicholson (crater).

Nicholson is a crater on Mars centered at 0.1° N and 164.5° W. It is 62 miles wide (100 km), and located in the Memnonia quadrangle. Nicholson is a good marker for the equator as it sits almost directly on the martian equator. It is named after Seth Barnes Nicholson, an American astronomer.

Nicholson is notable for its central peak, which rises in a high mound 3.5 km above the crater floor. This rounded peak is riddled with channels, which may have been eroded by wind or even water. 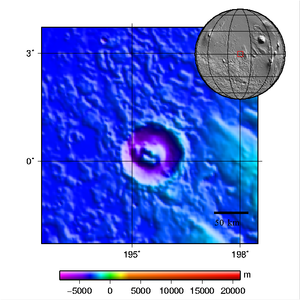 Impact craters generally have a rim with ejecta around them, in contrast volcanic craters usually do not have a rim or ejecta deposits. As craters get larger (greater than 10 km in diameter) they usually have a central peak.[1] The peak is caused by a rebound of the crater floor following the impact.[2] If one measures the diameter of a crater, the original depth can be estimated with various ratios. Because of this relationship, researchers have found that many Martian craters contain a great deal of material; much of it is believed to be ice deposited when the climate was different.[3] Sometimes craters expose layers that were buried. Rocks from deep underground are tossed onto the surface. Hence, craters can show us what lies deep under the surface.

The density of impact craters is used to determine the surface ages of Mars and other solar system bodies.[1] The older the surface, the more craters present. Crater shapes can reveal the presence of ground ice.

The area around craters may be rich in minerals. On Mars, heat from the impact melts ice in the ground. Water from the melting ice dissolves minerals, and then deposits them in cracks or faults that were produced with the impact. This process, called hydrothermal alteration, is a major way in which ore deposits are produced. The area around Martian craters may be rich in useful ores for the future colonization of Mars.[4] Studies on the earth have documented that cracks are produced and that secondary minerals veins are deposited in the cracks.[5][6][7] Images from satellites orbiting Mars have detected cracks near impact craters.[8] Great amounts of heat are produced during impacts. The area around a large impact may take hundreds of thousands of years to cool.[9][10][11]

Many places on Mars show dark streaks on steep slopes like crater walls. It seems that the youngest streaks are dark; they become lighter with age. Often they begin as a small narrow spot then widen and extend downhill for hundreds of meters. They have been seen to travel around obstacles, like boulders.[12] Several ideas have been advanced to explain the streaks. Some involve water or even the growth of organisms.[13][14][15] .[16] It is most generally accepted that they represent avalanches of dust. The streaks appear in areas covered with dust. When a thin layer of dust is removed, the underlying surface is dark. Much of the Martian surface is covered with dust. Fine dust settles out of the atmosphere covering everything. We know a lot about this dust because the solar panels of the Mars Rovers get covered with dust, thus reducing the electrical energy. The power of the Rovers has been restored many times by the wind, in the form of dust devils, cleaning the panels and boosting the power.[17] Dust storms are frequent, especially when the spring season begins in the southern hemisphere. At that time, Mars is 40% closer to the sun. The orbit of Mars is much more elliptical then the Earth's. That is the difference between the farthest point from the sun and the closest point to the sun is very great for Mars, but only slight for the Earth. Also, every few years, the entire planet is engulfed in a global dust storm. When NASA's Mariner 9 craft arrived there, nothing could be seen through the dust storm.[18][19] Other global dust storms have also been observed, since that time. Dark streaks can be seen in the image below of Nicholson Crater Mound that was taken by HiRISE.