He died of pneumonia in Shemiran, in the northern part of Tehran and was buried in his native village of Yush, Nur County, Mazandaran, as he had willed.

He was the eldest son of Ibrahim Nuri of Yush (a village in Baladeh, Nur County, Mazandaran province of Iran). He was a Tabarian but had also Georgian roots. He grew up in Yush, mostly helping his father with the farm and taking care of the cattle. As a boy, he visited many local summer and winter camps and mingled with shepherds and itinerant workers. Images of life around the campfire, especially those emerging from the shepherds' simple and entertaining stories about village and tribal conflicts, impressed him greatly. These images, etched in the young poet's memory waited until his power of diction developed sufficiently to release them. 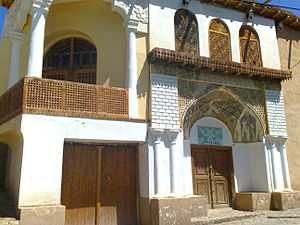 Nima's early education took place in a maktab. He was a truant student and the mullah (teacher) often had to seek him out in the streets, drag him to school, and punish him. At the age of twelve, Nima was taken to Tehran and registered at the St. Louis School. The atmosphere at the Roman Catholic school did not change Nima's ways, but the instructions of a thoughtful teacher did. Nezam Vafa, a major poet himself, took the budding poet under his wing and nurtured his poetic talent.

Instruction at the Catholic school was in direct contrast to instruction at the maktab. Similarly, living among the urban people was at variance with life among the tribal and rural peoples of the north. In addition, both these lifestyles differed greatly from the description of the lifestyle about which he read in his books or listened to in class. Although it did not change his attachment to tradition, the difference set fire to young Nima's imagination. In other words, even though Nima continued to write poetry in the tradition of Saadi and Hafez for quite some time his expression was being affected gradually and steadily. Eventually, the impact of the new overpowered the tenacity of tradition and led Nima down a new path. Consequently, Nima began to replace the familiar devices that he felt were impeding the free flow of ideas with innovative, even though less familiar devices that enhanced a free flow of concepts. "Ay Shab" (O Night) and "Afsaneh" (Myth) belong to this transitional period in the poet's life (1922). 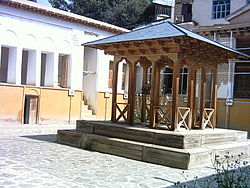 In general, Nima manipulated rhythm and rhyme and allowed the length of the line to be determined by the depth of the thought being expressed rather than by the conventional Persian meters that had dictated the length of a bayt (verse) since the early days of Persian poetry. Furthermore, he emphasized current issues, especially nuances of oppression and suffering, at the expense of the beloved's moon face or the ever-growing conflict between the lovers, the beloved, and the rival. In other words, Nima realized that while some readers were enthused by the charms of the lover and the coquettish ways of the beloved, the majority preferred heroes with whom they could identify. Furthermore, Nima enhanced his images with personifications that were very different from the "frozen" imagery of the moon, the rose garden, and the tavern. His unconventional poetic diction took poetry out of the rituals of the court and placed it squarely among the masses. The natural speech of the masses necessarily added local color and flavor to his compositions. Lastly, and by far Nima's most dramatic element was the application of symbolism. His use of symbols was different from the masters in that he based the structural integrity of his creations on the steady development of the symbols incorporated. In this sense, Nima's poetry could be read as a dialog among two or three symbolic references building up into a cohesive semantic unit. In the past only Hafez had attempted such creations in his Sufic ghazals. The basic device he employed, however, was thematic, rather than symbolic unity. Symbolism, although the avenue to the resolution of the most enigmatic of his ghazals, plays a secondary role in the structural makeup of the composition.455

The venues in which Nima published his works are noteworthy. In the early years when the presses were controlled by the powers that be, Nima's poetry, deemed below the established norm, was not allowed publication. For this reason, many of Nima's early poems did not reach the public until the late 1930s. After the fall of Reza Shah, Nima became a member of the editorial board of the "Music" magazine. Working with Sadeq Hedayat, he published many of his poems in that magazine. Only on two occasions he published his works at his own expense: "The Pale Story" and "The Soldier's Family."

The closing of "Music" coincided with the formation of the Tudeh Party and the appearance of a number of leftist publications. Radical in nature, Nima was attracted to the new papers and published many of his groundbreaking compositions in them.

Ahmad Zia Hashtroudy and Abul Ghasem Janati Atayi are among the first scholars to have worked on Nima's life and works. The former included Nima's works in an anthology entitled "Contemporary Writers and Poets" (1923). The selections presented were: "Afsaneh," (Myth) "Ay Shab" (O Night), "Mahbass" (Prison), and four short stories.

The Boat
My face is withered
My boat is stranded.

With my stranded bark I cry:
“I am stranded in sorrow
In this dangerous seashore
And the water is far away
“Help, O friends!”
A smile of derision breaks upon their lips
But directed at me
At my askew boat
At my tumultuous words
At my infinite perturbation
At my infinite perturbation
Suddenly a cry issues from me:
I fear but danger and annihilation
The commotion of `to be or not to be'
It is but for endangered life.”
With their mistake
I buy mistakes
From their disheartening words
I suffer
Blood spurts out of my wound
How can I dry the water?
I cry.
My face is withered
My boat is stranded
My words are clear to you:

My voice is broken in my throat
And if voice is voluble
I cry
For your salvation and mine
I cry!

My house is Cloudy

My house is overcast by clouds
Permanently weighed by a pall of cloud over the earth.
The wind, broken, desolate and intoxicated,
Whirls over the pass.
The world is laid waste by it
And my senses too!
O piper!
O you enchanted by the music of the pipe, where are you?

My house is cloudy, yet
The cloud is impregnated by rain.

Cherished by the illusion of my bright days,

I stand opposite the sun
I cast my gaze upon the sea.
And the entire world is desolated and ravaged by the wind
And the ever-playing piper progresses onto his path
In this cloudy world.