Nine Ladies is a Bronze Age stone circle located on Stanton Moor, Derbyshire, England.[1] Part of the Peak District National Park, the site is owned by English Heritage and is often visited by tourists and hill walkers. Druids and pagans occasionally celebrate summer solstice there.[2] 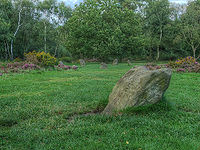 The King Stone looking towards the Nine Ladies stone circle

There are nine upright stones, each of local millstone grit, each less than a metre high, in a clearing in a modern wood planted on Stanton Moor.[3] They sit in a rough circle with a gap at the south side of the circle where no stone-hole has been found. However, an additional stone, lying flat rather than upright, was discovered after being exposed as a crop mark in the dry weather of 1976. It is now visible.[4] The circle is built on an embankment which levelled the local terrain.[5] The small "King Stone" lies forty metres from the circle to the west-south-west and is clearly visible from it.[1]

The Nine Ladies were among the 28 archetypal monuments in England and Wales included in General Pitt-Rivers’ Schedule to the first Ancient Monuments Protection Act, which became law in 1882. It was taken into state care the following year.[6]

The site has been the focus of a long-running environmental protest.

In 1999 Stancliffe Stone Ltd submitted a planning application to re-open two dormant quarries (Endcliffe and Lees Cross) on the wooded hillside beside Stanton Moor. The proposed quarry was only 200 metres (660 ft) from Nine Ladies, on land owned by Haddon Hall estate and leased to Stancliffe Stone. 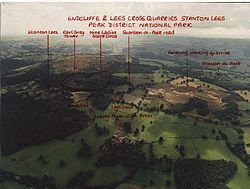 A local protest group SLAG (Stanton Lees Action Group) was set up to oppose the quarry. The group was joined by environmental protesters who set up a long-running and controversial protest camp. They built many tree houses, from which the inhabitants are hard to evict. The protesters defied a court eviction order in February 2004, and continued to occupy the site until the winter of 2008–09.

In 2004 the High Court classified the two quarries as dormant. There was an appeal against the decision, but the classification was upheld in June 2005.[7] This meant that the quarries could not re-open until the Peak District National Park Authority agreed on a set of working conditions for them. In 2008 permission to quarry near the circle was finally revoked.[8] 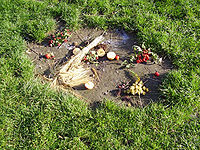 A sacrifice in the heart of the circle.

The site is a popular venue for pagan worship, particularly around the time of the solstices.[9] Pagans were amongst those protesting against the quarrying on the moor.[10] However, the pagan worshippers at the site are not a unified body and so tensions exist: for example, some pagans may leave offerings in the circle, but others regard these as litter.[11]