No purchase, no pay 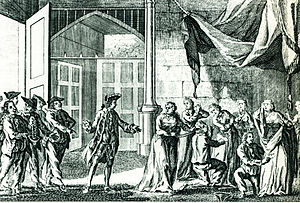 Privateer captain Woodes Rogers who is said to have employed pirates on a "no purchase, no pay" basis.

"No purchase, no pay" (or "no prey, no pay") was a phrase used by pirates and privateers, of the 17th century in particular, to describe the conditions under which participants were expected to join expeditions or raids. The phrase describes a remuneration arrangement similar to a commission.[1]

The term "purchase" in the phrase is used to mean success against piratical targets from whom booty might be successfully extracted.[2] The premise of the phrase was that if the expedition did not succeed in extracting booty from the target, those participating in the expedition would receive no reward.[3]

In the case of an unsuccessful raid, participants might receive nothing at all. But in the event that a raid was successful, loot was often shared equitably and democratically with clear ratios based on seniority and length of service.[4]

The phrase was used extensively to describe arrangements for pirates working on the Spanish Main in particular. The concept is said to have encouraged increased risk-taking as pirates made a calculated decision to attack more valuable targets with a better risk-reward ratio.[5]

Hender Molesworth, Governor of Jamaica, is known to have issued privateer and even pirate-hunting contracts with strict "no purchase, no pay" clauses.[3]