From Infogalactic: the planetary knowledge core
(Redirected from Nokia 301)
Jump to: navigation, search 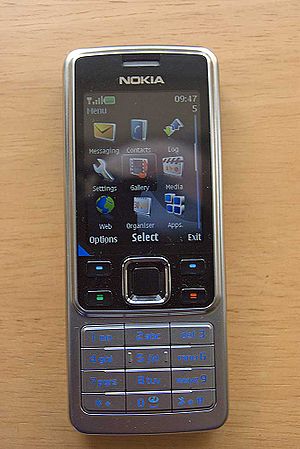 Series 40, often shortened as S40, is a software platform and application user interface (UI) software on Nokia's broad range of mid-tier feature phones, as well as on some of the Vertu line of luxury phones. It was one of the world's most widely used mobile phone platforms and found in hundreds of millions of devices.[1] Nokia announced on 25 January 2012 that the company has sold over 1.5 billion Series 40 devices.[2] S40 has more features than the Series 30 platform, which is more basic. They are not used for smartphones, in which Nokia primarily uses Windows Phone, and until 2012 Symbian. However, in 2012 and 2013, several Series 40 phones from the Asha line, such as the 308, 309 and 311, have been advertised as "smartphones" although they do not actually support smartphone features like multitasking or a fully fledged HTML browser.[3]

In 2014, Microsoft acquired Nokia's mobile phones business. As part of a licensing agreement with the company, Microsoft Mobile is allowed to use the Nokia brand on feature phones, such as the Series 40 range.[4] However, a July 2014 company memo revealed that Microsoft would end future production of Nokia's feature phone lines in favor of Windows Phone.[5] 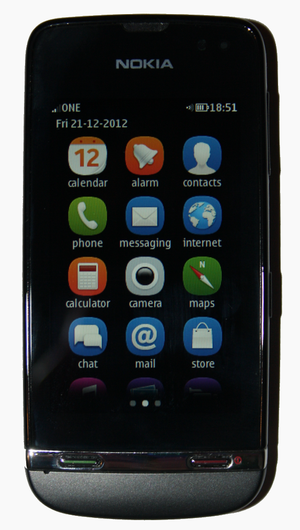 Nokia Asha phones exhibit some smartphone-like characteristics, such as full Internet access and navigation software. Shown is the Asha 311, which has a similar interface to that of the N9.

It provides communication applications such as telephone, Internet telephony (VoIP), messaging, email client with POP3 and IMAP4 capabilities and Web browser; media applications such as camera, video recorder, music/video player and FM radio; and phonebook and other personal information management (PIM) applications such as calendar and tasks. Basic file management, like in Series 60, is provided in the Applications and Gallery folders and subfolders. Gallery is also the default location for files transferred over Bluetooth to be placed. User-installed applications on Series 40 are generally mobile Java applications. Flash Lite applications are also supported, but mostly used for screensavers.[9]

The integrated web browser can access most web content through the service provider's XHTML/HTML gateway. The latest version of Series 40, called Series 40 6th Edition, introduced a new browser based on the WebKit open source components WebCore and JavaScriptCore. The new browser delivers support for HTML 4.01, CSS2, JavaScript 1.5, and Ajax. Also, like the higher-end Series 60, Series 40 can run the UC Browser web browser to enhance the user's web browsing experience. The latest feature phones from the Asha lineup come with the Nokia Xpress Browser which uses proxy servers to compress and optimize web pages in a similar fashion as Opera Mini.

Support for SyncML synchronization with external services of the address book, calendar and notes is present. However, with many S40 phones, these synchronization settings must be sent via an OTA text message.