The Nokia E6-00 is a smartphone running the Symbian^3 based "Symbian Anna" operating system. It supersedes the Nokia E72 as the new Symbian business mobility solution from Nokia.[5]

The smartphone is notable for its backlit 4-rows QWERTY keyboard and touch screen input methods, for its long battery life (Talktime : 7.5 to 14.8 h and Standby : 28 to 31 days),[3] the out-of-the-box access to Microsoft Exchange ActiveSync, Microsoft Communicator Mobile and Microsoft SharePoint[5] and the high pixel density of its VGA display (326ppi).[6]

Like its predecessors (Nokia E71/E72), the Nokia E6-00 integrates a stainless steel and glass design.[5] The back removable cover, the raised panel for the back camera, dual LED flash and loud speaker and the contour of the front are made of stainless steel. The front of the phone (except for the QWERTY keyboard, short cut buttons and Navikey) is covered with Corning Gorilla Glass.

Its casing has three color options (black, silver and white).

The predecessor of the E6-00 in the Eseries, consisting of business-oriented smartphones, was the Nokia E72 which shipped in November 2009. As with the E71, the E72 received mostly praises from the press. It is worth noting that Nokia released the E7, a landscape QWERTY slider smartphone in the E-series based on Symbian^3, that shipped in February 2011.

The first hints that the Nokia E6-00 was being developed came, in early January 2011, from a Nokia XML[7] and pictures from a Picasa album with pictures taken with the device.[8] Various information could be retrieved from the XML such as the 8 MP camera, VGA display and QWERTY keyboard.[9] The device was not officially announced at the Mobile World Congress held in Barcelona (14–17 February 2011).[10] Various pictures and videos of the Nokia E6-00 leaked during the months of February and March.

It was officially announced at a special event, named Discover Symbian, on 12 April 2011 along with the Nokia X7 and the latest update of Symbian software.[5] It is expected to be released in Q2 2011 in Europe at a price of €340 (before taxes and subsidies) and in Q3 2011 in North America.[4]

In May 2011, the Nokia E6 became available at the Nokia Deutschland online shop for preorder at the price of €429.[11]

The Nokia E6-00 has a 62.5 mm (diagonally) capacitive touchscreen with a resolution of 640 × 480 pixel (VGA, 326 ppi).[1] According to Nokia, it is capable of displaying up to 16.7M colours.[1] The screen brightness of the E6-00 is "more than double the brightness of the E72" when measured in candelas.[13] There is a proximity sensor which deactivates the display and touchscreen when the device is brought near the face during a call.[1] The Nokia E6 also understands PictBridge protocol so it's possible to directly print from the phone to a printer without using a computer to handle the data transfer in between.

The optical Navi key of the E72 has been replaced by a Navi key on the E6-00.[1] It has also an ambient light sensor that adjusts the display brightness and activates the backlit of the 4-row keyboard. A 3-axis accelerometer is present but will not switch the display to portrait mode when the device is turned sideways. It will, however, take pictures in portrait and show them the right way in the photo gallery.[13]

The device has an autonomous GPS with optional A-GPS functionality, Wi-Fi network positioning and Cell-ID and comes pre-loaded with the Ovi Maps application. Ovi Maps for Symbian^3 provides: free life time, turn by turn, voice guided car and pedestrian navigation.[1] If the map is already downloaded to the device, Ovi Maps does not require an active data connection and can work as a stand-alone GPS navigator. For other services, for example Google Maps, a data connection is required. 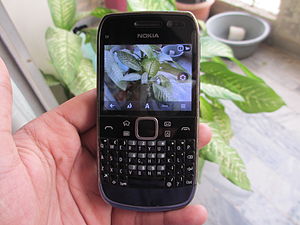 The Nokia E6 has a loudspeaker and two microphones.[2] The microphone at the front of the device collects voices of the user, another microphone at the back of the device collects environmental noise for active noise cancellation, which makes user's voice in noisy environment sound clearer to the person at the other end of the line. Noise cancellation is not available when using the loudspeaker or a headset.

On the front of the device, there is a QWERTY keyboard, call creation and call termination keys, home (menu), calendar, contact and email shortcut keys with short and long press features and a 5-way Scrolling (Navi key).[1] On the top there is the power/lock button, on the right hand side there is the lock/unlock slider, which also turn on the torch (dual LED flash of the camera). Above that button, there are three keys: (1) volume down, (2) volume up and (3) a middle key for activating the voice commands (long press) and the voice recorder (short press).[14][12] When the device is locked, pressing the Navi will also bring up a menu which allow to unlock the Nokia E6-00 from the touch screen.[12]

The QWERTY keyboard comes in a variety (24) language versions, including Arabic, Thai, Russian and Chinese.[15]

The E6-00 has a microphone and a loudspeaker located on the back of the device. There is a 3.5 mm four-contact audio jack which simultaneously provides stereo audio output and either microphone input or video output.[1] PAL and NTSC TV out is possible using a Nokia Video Connectivity Cable (not included upon purchase) or a standard 3.5 mm audio jack to RCA cable.

There is a High-Speed USB 2.0 USB Micro-B connector provided for data synchronization, mass storage mode (client) and battery charging. The Nokia E6-00 supports for USB On-The-Go 1.3[2] (the ability to act as a USB host) using a Nokia Adapter Cable for USB OTG CA-157 (not included upon purchase).[1]

The built-in Bluetooth v3 supports wireless earpieces and headphones through the HSP profile. The Nokia E6-00 is also capable of stereo audio output with the A2DP profile. Built-in car hands-free kits are also supported with the HFP profile. File transfer is supported (FTP) along with the OPP profile for sending/receiving objects. It is possible to remote control the device with the AVRCP profile. The DUN profile which permits access to the Internet from a laptop by dialing up on a mobile phone wirelessly (tethering). Other profiles are also supported (BIP, GAP, GAVDP, GOEP, HSP, PBAP, SAP, SDP and SPP).[2] The device has an 87.5-108 MHz (76-90 MHz in Japan) FM receiver with RDS support. It has Wi-Fi b/g/n connectivity (single band) with support for WEP, WPA and WPA2 (AES/TKIP) security protocols.[1]

The Nokia E6-00 has 8 GB of internal storage, which can be expanded with a microSDHC card up to 32 GB in size[1] There is 1 GB of ROM, of which 350 MB is available to the user to install applications.[2]

Some new users of the Nokia E6 have experienced issues with the notification LED which has been placed under the D-pad navigation key, as in previous models (E71, E72). However, it is apparent that Nokia has not allowed sufficient space between the D-pad key and the front face for the light to be visible. Nokia have acknowledged the problem but have not indicated whether a fix is possible in software by adjusting the brightness of the component.[16][17]

There is one solution that was done by Aniket Patil (aniketroxx), it was to redirect the notification light to Red Mute key, which was used by many people as alternative to D-Pad Fix. That solution also helped user to see light without opening E6 from cover.[18]

A revised Nokia E6 which has a hardware change to resolve the notification light issue started shipping on 22 October 2011.

Along with the Nokia X7, the E6-00 will ship with the updated Symbian^3 software user experience. This update, nicknamed "Anna", will offer, amongst others:[24]

An update to Nokia's latest Nokia Belle (a.k.a. "Nokia Belle Refresh" is available since 08.2012. The previous version (02.2012) was heavily criticised for its failure to meet special demands of E6, which were met in the original OS version Symbian Anna, which was specially adapted to E6, in contrast to the 02.2012 version of Belle.[25]

Due to its VGA (640 x 480) resolution, compared to the nHD (640 x 360) of the other Symbian^3 devices, some application may be incompatible with the E6-00 if they are designed for nHD display.[26] For example, Nokia guidelines stipulate that the user interface elements of the touch screen (accept button, virtual numpad, etc. ...) should be at least 7mm x 7mm. The high pixel density of the Nokia E6-00 means that the elements will need to be proportionately larger in pixels.[27]

Compared to others recent Symbian^3 devices, the Nokia E6-00 has two extra homescreens which gives a total of 5 homescreens. This is to give users the same opportunity for customization as the other devices on a smaller display which accommodate 3 widgets per homescreens.[13]

The Nokia E6 has WiFi coverage of the full spectrum of channels 1-13 in the crowded 2.4 GHz waveband (compared to just channels 1-11 on the E63 for example). It does not support the newer 5 GHz WiFi frequencies.