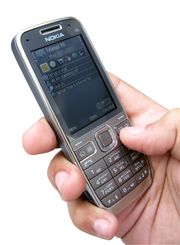 On October 12, 2005, mobile phone manufacturer Nokia announced what the company refers to as the Eseries, consisting of the three mobile phones, the Nokia E60, Nokia E61 and Nokia E70.[1]

On April 11, 2008, Nokia Australia has advised that the E61i will be discontinued in May 2008 and be replaced by a more featured but smaller E71.

Nokia provides the Nokia PC Suite software that allows synchronization and transfer of data, calendars, contacts, and more between most Nokia phones or to a Windows system via USB, Bluetooth or Infrared, the latter two being mostly used with portable systems like laptops, due to lack of Bluetooth or Infrared support in most PCs, especially in legacy systems.

Mac users can access the data on an E-series phone using a bluetooth connection, e.g. the Bluetooth File Exchange application native to OS X. Synchronizing addresses and calendars is done using iSync: some Nokia phones are supported natively by Mac OS X, some require that the user installs an iSync plugin from Nokia.[4]

Nokia also provides Nokia Multimedia Transfer[5] for managing user content on the device. NMT will synchronize music, videos and photos from selected iTunes playlists and iPhoto albums into the phone, transcoding and reducing the file size if necessary. It also presents the device as a digital camera in iPhoto for easy importing of photos and videos.