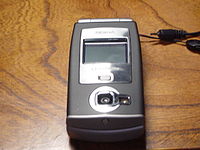 Features include a 2 megapixel camera, a built-in flash, a front VGA camera to allow real-time video calling, FM radio, Bluetooth, digital music player functionality, comes standard with a full Web browser, and has support for 3D Java games. It also has 3G and a microSD card slot for expandable memory.

Other features include its ability to transfer data via W-CDMA 2100, GPRS and EDGE.

Nokia promotes the N71's 2-megapixel digital rear camera as producing high-quality photography and video as well as its music and radio functionality (the phone's multimedia mini-SD card means it can hold up to 2 gigabytes, equating to potentially hundreds of tracks).

According to Nokia its specifications are: