The Nokia N93i (also known as the N93i-1) is a smartphone produced by Nokia, announced on 8 January 2007 and released the same month. It is part of the Nseries line and is a redesign of the Nokia N93. The N93i runs on Symbian OS version 9.1, with the S60 3rd Edition user interface. Like the N93, it is a clamshell and swivel design with a camera and landscape position.

The N95's improved camera capabilities have led to it being seldom called the N93i's successor, though Nokia have never made another swivel-style phone since.

The N93i is more of a redesign, than a successor to the N93. The improvements include:

The Nokia N93i features a 3.2-megapixel camera, Carl Zeiss optics, 3x optical zoom and digital video stabilization. The ability to create "DVD-like videos" at 30 frames per second with MPEG4 technology and share them on the 2.4-inch display. The Nokia N93i can be connected to a compatible TV using direct TV out connectivity or via Wireless LAN and UPnP technology. The N93i also features a digital stereo microphone, music player and FM stereo radio, dual mode WCDMA/GSM and triband GSM coverage on up to five continents (EDGE/GSM 900/1800/1900 + WCDMA 2100 MHz networks).

The camera is the main focus of the Nokia N93i, with video recording being one of the main aspects of the phone it also has high quality stereo sound which is recorded by the two microphones located at the top of the phone next to the power button. 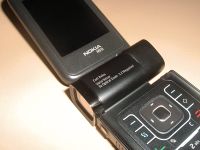 The N93i hinge with camera module.

The N93i is not an N-Gage 2.0 compatible device unlike other models such as the Nokia N81 and Nokia N95. The N-Gage application was unreleased for the Nokia N93i. The N93i has a 3D graphics chip. Unlike other models, the N93 and N93i make use of all of the keys on the keypad due to their design, all keys can be used in both landscape and portrait mode, although being a little less accessible.

Due to its incompatibility with the N-Gage application, electronics enthusiasts made a modified version of N-Gage which is compatible with Nokia N93i.

An N93i is seen in the 2007 movie, Transformers. It is the device used to demonstrate the AllSpark's capability of turning any electronic device into a living robot. This phone turned out to be a Decepticon tiny but deadly robot.

The N93i used a different marketing strategy by incorporating Dallas based punk rock band Greyskull in its APAC campaign. Running an on-line competition in which contestants could submit their own videos to the band's songs. Ads featuring the band Greyskull were run in newspapers and commercials on MTV Asia.

During the 2007 Cannes Lions Advertising Festival, camera crews using Nokia N93i devices tagged along with the Young Creative Film Competitors on their 48-hour mission to shoot a 30-second commercial, also using the Nokia N93i, for MTV SWITCH, a campaign from MTV Networks International designed to educate and encourage alternative options to help save the planet. With 40 hours of content filmed on the Nokia N93i, the footage was edited into an exclusive behind the scenes documentary, "Short Film Shootout: Cannes", which was available for broadcast on MTV's 61 TV channels across 161 countries on 20 December 2007.