Nokia Networks[2][3] (formerly Nokia Solutions and Networks (NSN) and Nokia Siemens Networks (NSN)) is a multinational data networking and telecommunications equipment company headquartered in Espoo, Finland, and wholly owned subsidiary of Nokia Corporation. It started as a joint venture between Nokia of Finland and Siemens of Germany known as Nokia Siemens Networks. Nokia Networks has operations in around 120 countries.[4] In 2013, Nokia acquired 100% of Nokia Networks, buying all of Siemens' shares.[5] In April 2014, NSN name was phased out as part of rebranding process.[3][6] 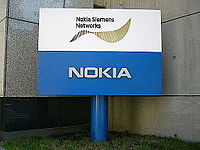 Sign at the Taiwanese headquarters of Nokia Siemens Networks in Songshan District, Taipei.

The company was created as the result of a joint venture between Siemens Communications division (minus its Enterprise business unit) and Nokia's Network Business Group. The formation of the company was publicly announced on 19 June 2006.[7] Nokia Siemens Networks was officially launched at the 3GSM World Congress in Barcelona in February 2007.[8] Nokia Siemens Networks then began full operations on 1 April 2007[9] and has its headquarters in Espoo, Greater Helsinki, Finland.

In 2009, according to Siemens, Siemens only retained a non-controlling financial interest in NSN, with the day-to-day operations residing with Nokia.[15]

On 19 July 2010, Nokia Siemens Networks announced it would acquire the wireless-network equipment division of Motorola.[16] The acquisition was completed on 29 April 2011 for $975 million in cash. As part of the transaction approximately 6,900 employees transferred to Nokia Siemens Networks.

On 23 November 2011, Nokia Siemens Networks announced that it would refocus its business on mobile broadband equipment, the fastest-growing segment of the market. This refocus resulted in the restructuring of the company and the planned layoffs of 17,000 employees. The plan reduced the company’s work force by 23% from its 2011 level of 74,000, and helped the company trim annual operating expenses by $1.35 billion by the end of 2013.[17][18]

After the restructuring process, Nokia Siemens Networks brought in a positive turn around to its businesses. The bottom line and operating margins rose to approximately 10%, which was a significant shift from the previous sub-zero margins, with positive cash flows for six continuous quarters.[19]

On 7 August 2013, the company completed the acquisition of Siemens' stake and renamed as Nokia Networks. After this acquisition NSN became fully owned by Nokia.