From Infogalactic: the planetary knowledge core
Jump to: navigation, search
Not to be confused with Microsoft Lumia 640 XL.

The Nokia XL is a smartphone announced as part of the Nokia X family in February 2014, running on the Nokia X platform. It is currently sold and maintained by Microsoft Mobile. 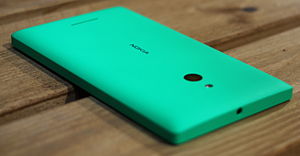 The rear side of the device

The Nokia XL was announced in a surprising manner at the 2014 edition of Mobile World Congress on 24 February 2014 which was held in Barcelona, Spain.[5][6]

Reports suggested only a 4-inch touchscreen Android running Nokia X will be unveiled but Nokia also announced the 'Nokia X family' which was made up of Nokia X, Nokia X+ and Nokia XL.

Nokia XL was much of a hardware upgrade from the other members of the maiden Nokia X family. It came with a 5-inch touchscreen instead of the 4-inch ones on the others. It featured a bigger camera (5 MP sensor) and also a LED flash and 2 MP front-facing camera—the last two are absent on the Nokia X and Nokia X+ models.[7][8][9]

The phone was known in the development stages as "Asha Monster".[10]

A LTE version was released in China in July 2014.