World map showing Organization for Security and Co-operation in Europe members. The members of this group resemble the traditional description of the 'North', defined as the old First and Second World.

The North–South divide is broadly considered a socio-economic and political divide. Generally, definitions of the Global North include the United States, Canada, Western Europe and developed parts of East Asia. The Global South is made up of Africa, Latin America, and developing Asia including the Middle East. The North is home to all the members of the G8 and to four of the five permanent members of the United Nations Security Council.

The North mostly covers the West and the First World, along with much of the Second World, while the South largely corresponds with the Third World. While the North may be defined as the richer, more developed region and the South as the poorer, less developed region, many more factors differentiate between the two global areas. 95% of the North has enough food and shelter.[1] Similarly, 95% of the North has a functioning educational system. In the South, on the other hand, only 5% of the population has enough food and shelter. It “lacks appropriate technology, it has no political stability, the economies are disarticulated, and their foreign exchange earnings depend on primary product exports”.[1]

In economic terms, the North—with one quarter of the world population—controls four fifths of the income earned anywhere in the world. 90% of the manufacturing industries are owned by and located in the North.[1] Inversely, the South—with three quarters of the world populations—has access to one fifth of the world income. As nations become economically developed, they may become part of the "North", regardless of geographical location, while any other nations which do not qualify for "developed" status are in effect deemed to be part of the "South".[2]

The idea of categorizing countries by their economic and developmental status began during the Cold War with the classifications of East and West. The Soviet Union and China represented the East, and the United States and their allies represented the West. The term "Third World" was coined by states hoping to navigate between the two poles of the Cold War, and ultimately gave birth to the Non-Aligned Movement. These countries were generally less economically developed than their First- and Second-World counterparts. As some Second World countries joined the First World, and others joined the Third World, a new and simpler classification was needed. The First World became the “North” and the Third World became the “South”.[3]

Problems with defining the divide

Following the fall of the Eastern Bloc, which was commonly referred to as the Second World, many of its constituent countries were reclassified as developing, despite being geographically northern. At the same time, geographically southern nations previously considered "developing," such as the East Asian Tigers or Turkey, have joined the modern First World, but are classified inconsistently in maps showing the north–south divide.[citation needed] Similarly, dependencies and former dependencies of developed nations are also classified as Southern, although they are part of the developed world;[4] most notably Australia and New Zealand, the latter being the most southern (in terms of its center of overall land mass) of all independent sovereign states.

On an ideological level, some development geographers have argued that current concentration on the north–south divide as the main organizing principle for understanding the world economy has overlooked the role of inter-imperial conflicts between the United States, Japan, and Europe.[5]

The north–south divide has more recently been named the development continuum gap. This places greater emphasis on closing the evident gap between rich (more economically developed) and poor (less economically developed) countries. A good measure of on which side of the gap a country is located is the Human Development Index (HDI). The nearer this is to 1.0, the greater is the country's level of development and the further the country is on its development pathway (closer towards being well developed), exemplified well by Walter Rostow's model of development and the Clark Fisher model.[citation needed] 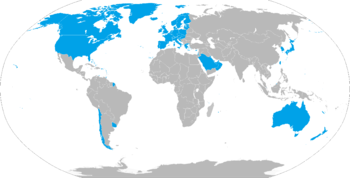 Being categorized as part of the “North” implies development as opposed to belonging to the “South” which implies a lack thereof. According to N. Oluwafemi Mimiko, The South lacks the right technology, it is politically unstable, their economies are divided, and their foreign exchange earnings depend on primary product exports which come from the North, along with the fluctuation of prices. The little control of imports and exports condemned the South to obey the imperialist system. The lack of the South and the development of the North further the inequality and end up putting the South as a source of raw material for the developed countries.[6] The north becomes synonymous with economic development and industrialization while the South represents the previously colonized countries which are in need of help in the form of international aid agendas [7] In order to understand how this divide occurs, a definition of “development” itself is needed. Northern countries are using most of the earth resources and most of them are high entropic fossil fuels. Reducing emission rates of toxic substances is central to debate on sustainable development but this can negatively affect economic growth.

The Dictionary of Human Geography defines development as “[p]rocesses of social change or [a change] to class and state projects to transform national economies".[8] This definition entails an understanding of economic development which is imperative when trying to understand the north–south divide.

Economic Development is a measure of progress in a specific economy. It refers to advancements in technology, a transition from an economy based largely on agriculture to one based on industry and an improvement in living standards.[9][10]

Other factors that are included in the conceptualization of what a developed country is include life expectancy and the levels of education, poverty and employment in that country.

Countries' average latitude and GDP per capita according to The World Factbook (2013). The Brandt Line is shown in bold.

The Brandt Line is a visual depiction of the north–south divide, proposed by West German Chancellor Willy Brandt in the 1980s. It encircles the world at a latitude of approximately 30° North, passing between North and Central America, north of Africa and the Middle East, climbing north over China and Mongolia, but dipping south so as to include Australia and New Zealand in the "Rich North".

The global digital divide is often characterised as corresponding to the north–south divide; however, Internet use, and especially broadband access, is now soaring in Asia compared with other continents. This phenomenon is partially explained by the ability of many countries in Asia to bypass older Internet technology and infrastructure, coupled with booming economies which allow vastly more people to get online.

Uneven immigration patterns lead to inequality: in the late eighteenth and nineteenth centuries immigration was very common into areas previously less populated (North America, Argentina, Brazil, Australia, New Zealand) from already technologically advanced areas (United Kingdom, France, Spain, Portugal). This facilitated an uneven diffusion of technological practices since only areas with high immigration levels benefited. Immigration patterns in the twenty-first century continue to feed this uneven distribution of technological innovation. People are eager to leave countries in the South to improve the quality of their lives by sharing in the perceived prosperity of the North. “South and Central Americans want to live and work in North America. Africans and Southwest Asians want to live and work in Europe. Southeast Asians want to live and work in North America and Europe”.[3]

Some economists have argued that international free trade and unhindered capital flows across countries could lead to a contraction in the North–South divide. In this case more equal trade and flow of capital would allow the possibility for developing countries to further develop economically.[3]

However, policymakers in the South are often skeptical of capitalism and have proposed alternative solutions. In 1974, Southern nations called for a New International Economic Order (NIEO) to restructure the global economy.[11] Their demands included linking prices of commodity exports to manufactured imports, transferring technology from North to South, cancelling or rescheduling debts of the Third World, improving the quality of their representation within institutions such as the World Bank, UN Security Council, standardizing prices for raw materials, solving food crises, and "opening up of the North’s market for manufactured or semi-processed goods of the South." [11]

As some countries in the South experience rapid development, there is evidence that those states are developing high levels of South–South aid.[12] Brazil, in particular, has been noted for its high levels of aid ($1 billion annually—ahead of many traditional donors) and the ability to use its own experiences to provide high levels of expertise and knowledge transfer.[12] This has been described as a "global model in waiting".[13]

The United Nations has also established its role in diminishing the divide between North and South through the Millennium Development Goals, all of which were to be achieved by 2015. These goals seek to eradicate extreme poverty and hunger; achieve universal primary education; promote gender equality and empower women; reduce child mortality; improve maternal health; combat HIV/AIDS, malaria, and other diseases; ensure environmental sustainability; and develop a global partnership for development.[14] 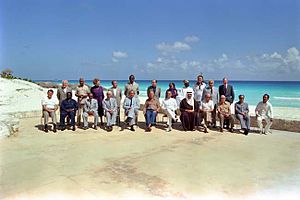 Heads of State at the 1981 North-South Summit in Mexico.