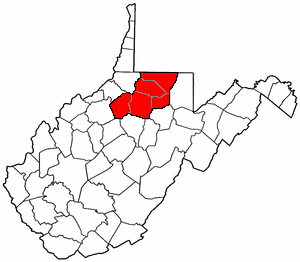 North Central West Virginia (sometimes known as "Mountaineer Country") is a region of the U.S. State of West Virginia. The region's largest city is Morgantown.

These counties are sometimes also included into the region depending on who is asked.

Wetzel County would not be part of the region because not only does the county border Ohio, but also many West Virginians largely consider Wetzel County to be a part of the Northern Panhandle region, even though it does not lie within the actual "Panhandle." [1]

Note: These cities are sometimes included within the region.

The Fairmont Marion County Transit Authority provides bus routes focusing within Marion County, but trips to the nearby cities of Clarksburg and Morgantown are also provided for a charge of $2.00, one way. Free transfers are provided at the Marion County courthouse. All routes within the county have a flat rate of $0.75, but for all routes, children under the age of 6 ride free.

CENTRA is a service based at the southern end of the region, serving the areas around Clarksburg and Harrison County. Travel is facilitated by 16 individual lines that run weekdays from 6 AM to 6 PM, and Saturdays from 8 AM to 4 PM.

The Mountain Line Transit Authority provides bus routes in and around Monongalia County and WVU campuses. When WVU is in session, 18 routes around Morgantown provide service from as early as 6 AM to as late as 2:30 AM. During summer these hours are slightly reduced, and some routes are eliminated altogether. The Grey Line is a special intercity service connecting the area to Pittsburgh for a flate rate of $25.00 per ride. For regular routes, standard individual fare is $0.75, with special packages such as monthly passes or individual deviations. Transfers are $0.75, and children 5 and under ride free.