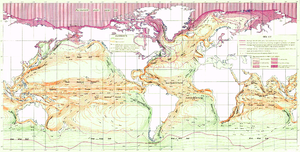 Schematic of the world's ocean currents

The North Atlantic Current (also known as North Atlantic Drift and North Atlantic Sea Movement) is a powerful warm ocean current that continues the Gulf Stream northeast. West of Continental Europe, it splits into two major branches. One branch goes southeast, later to become the Canary Current as it passes northwest Africa and turns southwest. The other major branch continues north along the coast of Northwestern Europe. It is thought to have a considerable warming influence on the climate, but there is a minority view.[1] Other branches include the Irminger Current and the Norwegian Current. Driven by the global thermohaline circulation (THC), the North Atlantic Current is part of the wind-driven Gulf Stream, which goes further east and north from the North American coast across the Atlantic and into the Arctic Ocean.