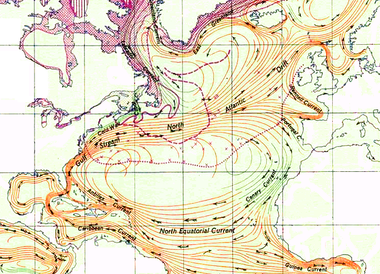 View of the currents surrounding the gyre.

The North Atlantic Gyre, located in the Atlantic Ocean, is one of the five major oceanic gyres. It is a circular system of ocean currents that stretches across the North Atlantic from near the equator almost to Iceland, and from the east coast of North America to the west coasts of Europe and Africa.

As with many oceanographic patterns, the North Atlantic Gyre experiences seasonal changes. Stramma and Siedler (1988) determined that the gyre expands and contracts with a seasonal variance; however, the magnitude of volume transport does not seem to change significantly. During the Northern Hemisphere winter season, the gyre follows a more zonal pattern; that is, it expands in the east-west direction and thins in the north-south direction. As the seasons move from winter to summer, the gyre shifts south by a few degrees latitude. This occurs concurrently with the displacement of the northeastern part of the gyre. It has been concluded that zonal deviations within the gyre remain small while north and south of the gyre they are large.[2]

Data collected in the Sargasso Sea region in the western part of the North Atlantic Gyre has led to analytical evidence that the variability of this gyre is linked to wintertime convective mixing. According to Bates (2001), a seasonal variation of 8-10 °C in surface temperature occurs alongside a fluctuation in the mixed layer depth between the Northern Hemisphere winter and summer seasons. The depth rises from 200 meters in winter to about 10 meters in summer. Nutrients remain below the euphotic zone for most of the year, resulting in low primary production. Yet during winter convective mixing, nutrients penetrate the euphotic zone, causing a short-lived phytoplankton bloom in the spring. This then lifts the mixed-layer depth to 10 meters.

The changes in oceanic biology and vertical mixing between winter and summer in the North Atlantic Gyre seasonally alter the total amount of carbon dioxide in the seawater. Interannual trends have established that carbon dioxide concentrations within this gyre are increasing at a similar rate to that occurring in the atmosphere. This discovery concurs with that made in the North Pacific Gyre. The North Atlantic Gyre also undergoes temperature changes via atmospheric wave patterns. The North Atlantic Oscillation (NAO) is one such pattern. During its positive phase, the gyre warms. This is due to a weakening of the westerly winds, resulting in reduced wind stress and heat exchange, providing a greater period of time for the gyre water temperatures to rise.[3]

Collections of aerosols, marine particles, and ocean water in the North Atlantic Gyre from 1990-1992 have led to measurements in lead isotope ratios. These measurements exceed those associated with atmospheric pollution carried from Europe by the trade winds, implying that the majority of lead contamination in the gyre in the early 1990s was primarily caused by American emissions. The surface layers of the Sargasso Sea were used to estimate the lead isotopic concentrations. 42-57% of the lead isotope concentrations result from American industrial and automotive contamination, despite the reduction in the production and use of leaded gasoline in the United States. However, lead concentrations from measurements made after 1992 show a decrease in the amount of lead contamination.[4]