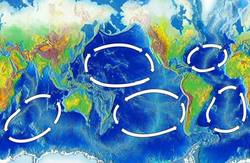 The North Atlantic garbage patch is an area of man-made marine debris found floating within the North Atlantic Gyre, originally documented in 1972.[1] The patch is estimated to be hundreds of kilometres across in size,[2] with a density of over 200,000 pieces of debris per square kilometer.[3][4] The debris zone shifts by as much as 1,600 km (990 mi) north and south seasonally, and drifts even farther south during the El Niño-Southern Oscillation, according to the NOAA.[2]

To study the scale of the marine debris accumulation in the area, the Sea Education Association (SEA) has been doing extensive research on the Atlantic Garbage Patch. Nearly 7,000 students from the SEA semester program have been dragging 6,100 fine-mesh nets through the Atlantic over 22 years. The gyre in the North Atlantic Ocean contains plastic marine pollution in a pattern and amount similar to what has been found in the Great Pacific Garbage Patch.[5]

Effect on wildlife and humans

While eating their normal source of food, plastic ingestion can be unavoidable to wildlife.[6][7][8]

On 11 April 2013 in order to create awareness, artist Maria Cristina Finucci founded The Garbage patch state at UNESCO[9] –Paris in front of Director General Irina Bokova . First of a series of events under the patronage of UNESCO and of Italian Ministry of the Environment.[10]