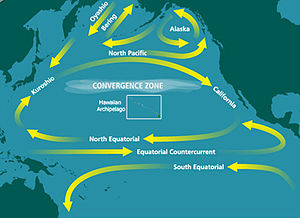 The North Pacific Gyre, located in the northern Pacific Ocean, is one of the five major oceanic gyres. This gyre covers most of the northern Pacific Ocean. It is the largest ecosystem on Earth, located between the equator and 50° N latitude, and comprising 20 million square kilometers.[1] The gyre has a clockwise circular pattern and is formed by four prevailing ocean currents: the North Pacific Current to the north, the California Current to the east, the North Equatorial Current to the south, and the Kuroshio Current to the west. It is the site of an unusually intense collection of man-made marine debris, known as the Great Pacific garbage patch.