From Infogalactic: the planetary knowledge core
Jump to: navigation, search
This article is about the Mandarin Chinese spoken in the Northeastern part of China. For the standardized official spoken Chinese language, see Standard Chinese.

Northeastern Mandarin[2] is the dialect of Mandarin Chinese spoken in Northeast China. It is very similar to the Beijing dialect upon which Standard Chinese (Pǔtōnghuà) is based, the two forming Northern Mandarin.

Northeastern Mandarin can be subdivided into regional sub-dialects named for major cities where there might be slight differences.

The Taz dialect is spoken in Russia by the Taz people, a group formed from intermarriage between Udege, Nani and Han Chinese people since approximately 1800.

Northeastern Mandarin is extremely close to the Beijing dialect of Standard Chinese. The Chinese dialectologist Li Rong believes that Beijing Mandarin could be classified as a northeastern dialect, because Beijing shares more tonal and phonological features - for example, the preservation of initial [w] over [v] - with northeastern Mandarin than with the dialects of Hebei province, which surrounds Beijing.[3] However, in northeastern Chinese, final -ian or -üan is pronounced with an [æ] rather than with [ɛ] or [e] as in the standard.[3]

One hypothesis for the similarities tells that as the Qing conquest of the Ming overturned the government in Beijing in 1644, hundreds of thousands of Manchu people - the northeastern ethnic group of the new ruling family - moved into the Chinese capital. The Manchus adopted Mandarin Chinese as an official language along with their native Manchu before they invaded China proper and took Beijing, due to the massive amount of Chinese officials and soldiers defecting to their side. They would become over 30% of the city's population and eventually their version of Mandarin Chinese wielded influence over the local Chinese dialect.[3] 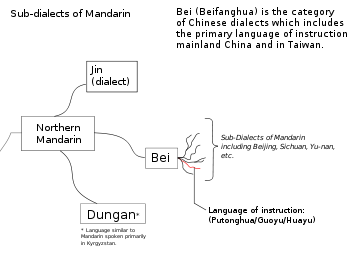 Although not considered a language in academic circles, Mandarin variants like Northeastern Mandarin often contribute to a strong regional identity. Native or fluent Chinese speakers can usually recognize a Northeasterner by his or her accent (similar to how a fluent English speaker can assume a person with a Southern American English accent to be from the Southern United States). Because of its informal usage of words and tones, comedians often use Northeast dialects when performing.

The comedian Zhao Benshan is recognized nationwide for his performances which make humorous use of Northeastern dialect and the Er ren zhuan folk dance and song traditions of northeast people.[4]