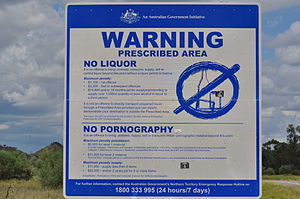 The Northern Territory National Emergency Response (also referred to as "the intervention") was a package of changes to welfare provision, law enforcement, land tenure and other measures, introduced by the Australian federal government under John Howard in 2007 to address allegations of rampant child sexual abuse and neglect in Northern Territory Aboriginal communities.[1] Operation Outreach, the intervention's main logistical operation conducted by a force of 600 soldiers and detachments from the ADF (including NORFORCE) concluded on 21 October 2008.[2] In the seven years since the initiation of the Emergency Response there has not been one prosecution for child abuse come from the exercise.[3]

The package was the Federal government's response to the Territory government's publication of Little Children are Sacred, but implemented only two out of ninety-seven of the report's recommendations. The response has been criticised, but also received bipartisan parliamentary support. The then Prime Minister Julia Gillard has and continues to support the response, though her predecessor (and successor) Kevin Rudd did make some adjustments to its implementation. The Emergency Response has since been replaced by the very similar Stronger Futures Policy.

The response was introduced during the lead-up to the 2007 federal election, at which the incumbent Coalition government led by John Howard, in office since 1996, was defeated. The policy was criticised as rushed and poll-driven,[4] although it gained the broad support of the Rudd Labor opposition and some Aboriginal leaders.

The response also came at a time of increasing debate over the future of federalism in Australia, in particular the proper extent of federal power into areas of government traditionally managed by the states and territories. It was one of a number of federal interventions enacted in 2007. Other state responsibilities targeted by the Australian Government at the time included seaports, workplace relations, the Murray-Darling river system and public hospitals.

The policy was initially insulated from criticism because of the sensitive nature of the issue and the fact that the national Parliament faces no constitutional barriers to overruling the Northern Territory government, unlike the governments of Australia's states, which have some constitutionally preserved areas of legislative power.[5]

The legislation introduced as part of the package included:

The $587 million package came into effect with the passage of the Northern Territory National Emergency Response Act 2007 by the Australian Parliament in August 2007. The nine measures contained therein were as follows:

The Northern Territory Intervention was originally drafted by the Howard Government, with Indigenous Affairs Minister Mal Brough being the chief architect. The Rudd Government took office in 2007 and pledged to continue the policy, though Indigenous Affairs Minister Jenny Macklin ended the suspension of the Racial Discrimination Act in 2010. The Labor Party replaced Kevin Rudd with Julia Gillard in 2010 and the Gillard Government also pledged to continue the Intervention.

By February 2011, the original architect of the policy, former minister Mal Brough was arguing that the Intervention Policy had become stagnant and wasn't going to work unless it was revitalised.[7] In April 2011, Opposition Leader Tony Abbott proposed consultation with Indigenous people over a bipartisan Federal Government intervention in Northern Territory towns like Alice Springs, Katherine and Tennant Creek which would cover such areas as police numbers and school attendance in an effort to address what he described as a "failed state" situation developing in areas of the Northern Territory.[8]

Prime Minister Gillard toured Northern Territory Communities in June 2011 and told the media "I believe the intervention has made a difference", citing the provision of meals to children, and better child health and welfare outcomes and a reduction in aggravated assaults.[9]

Though the plan achieved broad bi-partisan support in the Parliament, it has also been criticised by the Northern Territory Labor government, the Human Rights and Equal Opportunity Commission[10] and by several Aboriginal leaders and community spokespeople. The plan was also given strong support by other community groups and Aboriginal leaders.

The use of sexual abuse as the catalyst for the intervention has been subject to debate. One view is that sexual abuse is a 'trojan horse' for other purposes such as regaining government control over disputed land.[11]

The measures of the response which have attracted most criticism comprise the exemption from the Racial Discrimination Act 1975, the compulsory acquisition of an unspecified number of prescribed communities (Measure 5) and the partial abolition of the permit system (Measure 10). These have been interpreted as undermining important principles and parameters established as part of the legal recognition of indigenous land rights in Australia.

In 2010, James Anaya, a United Nations Special Rapporteur, found the Emergency Response to be racially discriminating and infringe on the human rights of Aboriginal people in the Northern Territory.[12] Anaya acknowledged that emergency action was needed but said that measures like banning alcohol and pornography and quarantining a percentage of welfare income for the purchase of essential goods represented a limitation on "individual autonomy".[13]

Organisations such as Australians for Native Title and Reconciliation (ANTaR) have argued that breaching the Racial Discrimination Act is not necessary in order to protect the children in the affected areas.[14]

More generally, a lack of consultation with Aboriginal community leaders is often cited by critics of the response,[15] alongside the fact that the action addresses very few of the specific recommendations contained in the Little Children are Sacred Report, while introducing many measures not suggested in the Report.

While finding some support among organisations like the Australian Greens, Anaya's Report was widely condemned in Australia, with the Rudd Government's Indigenous Affairs Minister, Jenny Macklin, saying that her duty to protect the rights of children was paramount. Opposition Spokesman Tony Abbott queried whether Anaya had adequately consulted with people who had lived through the intervention; indigenous activist Warren Mundine said the report should be "binned" and Central Australian Aboriginal leader Bess Price criticised the UN for not sending a female repporteur and said that Anaya had been led around by opponents of the intervention to meet with opponents of the intervention.[16][17]

A delegation of Northern Territory Aboriginal leaders met with the UN High Commissioner for Human Rights, Navi Pillay at Charles Darwin University in May 2011. The delegation stated that the situation had deteriorated under the intervention. There is greater discrimination against them, Ms Pillay said they told her. Firstly, they said there's been an intervention and it started off badly without them being consulted, and secondly, there is insufficient respect for their land, she said. The delegation said Aboriginal people were under pressure from the Gillard government to sign leases over land they already own. They see that as a land grab, Ms Pillay said.[20]

Some Aboriginal commentators and activists, such as Noel Pearson, Marcia Langton and Bess Price, have offered support, criticising aspects of the response while believing it to be necessary and worthwhile.[21][22][23][24][25] The Aboriginal leader Galarrwuy Yunupingu initially supported the response, but by 2010 had lost faith in it.[26][27][28][29][30][31]

Writing in February 2008, Aboriginal academic Marcia Langton rejected arguments that the Intervention had been a "political ploy" and argued that the policy in fact marked the death of a "wrong-headed male Aboriginal ideology":[32]