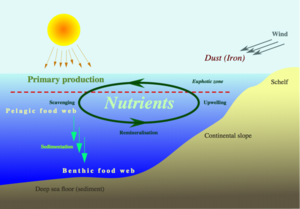 Nutrient cycle in the oceans

Nutrients are components in foods that an organism uses to survive and grow. Macronutrients provide the bulk energy an organism's metabolic system needs to function while micronutrients provide the necessary cofactors for metabolism to be carried out. Both types of nutrients can be acquired from the environment.[1] Micronutrients are used to build and repair tissues and to regulate body processes while macronutrients are converted to, and used for, energy. Methods of nutrient intake are different for plants and animals. Plants take in nutrients directly from the soil through their roots and from the atmosphere through their leaves. Animals and protists have specialized digestive systems that work to break down macronutrients for energy and utilize micronutrients for both metabolism and anabolism (constructive synthesis) in the body.

Organic nutrients consist of carbohydrates, fats, proteins (or their building blocks, amino acids), and vitamins. Inorganic chemical compounds such as dietary minerals, water, and oxygen may also be considered nutrients.[2] A nutrient is considered essential if it must be obtained from an external source either because the organism cannot synthesize it or because insufficient quantities are produced. Nutrients needed in very small amounts are called micronutrients while those needed in large quantities are called macronutrients. The effects of nutrients are dose-dependent; shortages are called deficiencies.[3] 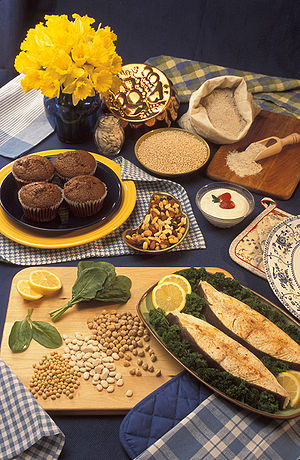 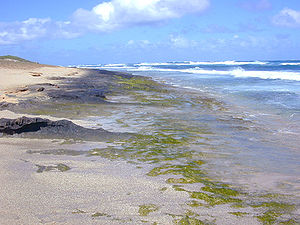 The strip of a green alga (Enteromorpha) along this shore indicates that there is a nearby source of nutrients (probably nitrates or ammonia from a small estuary).

Plants absorb nutrients from the soil or the atmosphere, or from water (mainly aquatic plants). An exception are the carnivorous plants, which externally digest nutrients from animals before ingesting them.[6]

The chemical elements consumed in the greatest quantities by plants are carbon, hydrogen, and oxygen. These are present in the environment in the form of water and carbon dioxide; energy is provided by sunlight.[7] Nitrogen, phosphorus, and sulfur are also needed in relatively large quantities. Together, the "Big Six" are the elemental macronutrients for all organisms,[8] often represented by the acronym CHNOPS.[9] Usually they are sourced from inorganic (e.g. carbon dioxide, water, nitrate, phosphate, sulfate) or organic (e.g. carbohydrates, lipids, proteins) compounds, although elemental diatomic molecules of nitrogen and (especially) oxygen are often used.

Other chemical elements are also necessary to carry out various life processes and build structures; see fertilizer and micronutrient for more information. 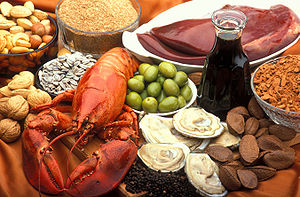 Some of these are considered macronutrients in certain organisms. The mnemonic C. HOPKN'S CaFe Mg (to be used as C. Hopkins coffee mug) is used by some students to remember the list as: carbon, hydrogen, oxygen, phosphorus, potassium, nitrogen, sulfur, calcium, iron, and magnesium. Silicon, chloride, sodium, copper, zinc, and molybdenum are sometimes also included, but are in other cases considered micronutrients.[10]

Nutrients are frequently categorized as essential and nonessential.

Essential nutrients are unable to be synthesized internally (either at all, or in sufficient quantities), and so must be consumed by an organism from its environment.[11] Nonessential nutrients are those nutrients that can be made by the body; they may often also be absorbed from consumed food.[11] The majority of animals ultimately derive their essential nutrients from plants,[11] though some animals may consume mineral-based soils to supplement their diet.

For humans, these include essential fatty acids, essential amino acids, vitamins, and certain dietary minerals. Oxygen and water are also essential for human survival, but are generally not considered "food" when consumed in isolation. There are no "essential carbohydrates", animals can synthesize all the types of carbohydrates needed for growth.

Humans can derive energy from a wide variety of fats, carbohydrates, proteins, and simple chemicals such as ethanol and acetic acid.

Non-essential nutrients are substances within foods can still have a significant impact on health, whether beneficial or toxic. For example, most dietary fiber is not absorbed by the human digestive tract, but is important in maintaining the bulk of a bowel movement to avoid constipation.

Interest has recently increased in phytochemicals, which include many non-essential substances which may or may not have health benefits.[1]

Nutrient toxicity occurs when an excess of a nutrient does harm to an organism.