Funded from a combination of television licence fee revenue and limited on-air advertising, ORF is the dominant player in the Austrian broadcast media. Austria was the last country in continental Europe after Albania to allow nationwide private television broadcasting.

History of broadcasting in Austria 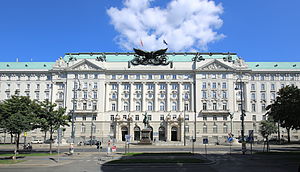 The first unregulated test transmissions in Austria were made beginning 1 April 1923 by Radio Hekaphon, run by the radio pioneer and enthusiast Oskar Czeija (1887–1958), who applied for a radio license in 1921; first in his telephone factory in the Brigittenau district of Vienna, later in the nearby TGM technical college. September 2, it aired a first broadcast address by Austrian President Michael Hainisch. One year later, a powerful transmitter, designed by the German Telefunken company, was installed on the roof of the former War Ministry building on Ringstraße in central Vienna.

It was, however, the public Radio-Verkehrs-Aktiengesellschaft ("Radio Communication Company Ltd", RAVAG), a joint-venture of the Austrian Federal Government, the City of Vienna and several bank companies, which, in February 1924, was awarded the concession to begin broadcasting, with Czeja as its director-general. Regular transmissions began on 1 October 1924 from provisional studios inside the War Ministry building that were to become known as Radio Wien (Welle 530). By the end of October 1924 it already had 30,000 listeners, and by January 1925 100,000. Relay transmitters, established across the country by 1934, ensured that all Austrians could listen to Radio Wien at a monthly fee of two schillings.

Radio programmes aimed at an educated audience, featuring classical music, literature and lectures. First live radio broadcasts aired in 1925, transmitted from the Vienna State Opera and the Salzburg Festival. On the other hand, news broadcasts only played a minor part out of deference to the Austrian press and the "neutralism" policy of the federal government (the July Revolt of 1927 was not even mentioned). Nevertheless, also regular sportcasts began 1928 and in 1930 the Austrian legislative election was comprehensively covered. At that time, RAVAG registered about 500,000 listeners, having become a mass medium. 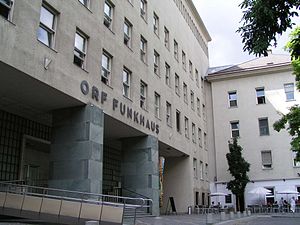 Funkhaus Wien: today chiefly a centre for the production of radio programmes

In the course of the abolishment of the First Austrian Republic and the implementation of the Austrofascist Ständestaat by Chancellor Engelbert Dollfuß in 1934, the RAVAG studios were embattled during the Austrian Civil War in February, as well as by the protagonists of the Nazi July Putsch, when several insurgents entered the studio and had Dollfuß' resignation announced (he actually was killed in his occupied Chancellery office). Dollfuß successor Kurt Schuschnigg had the demolished broadcasting centre replaced by the new Radiokulturhaus building (present-day Funkhaus Wien) near the Theresianum academy in Vienna-Wieden, designed by Clemens Holzmeister and erected from 1935 to 1939. The Austrian government widely used RAVAG broadcasts for propaganda activities, defying massive cross-border Nazi propaganda broadcasts aired from German transmitters in the Munich region, but also promoted the live transmission of mass celebrations.

With the Austrian Anschluss to Nazi Germany and the invasion of Wehrmacht troops in 1938, RAVAG was dissolved and replaced by Reichssender Wien subordinate to the national Reichs-Rundfunk-Gesellschaft network (Großdeutscher Rundfunk from 1939) in Berlin, were also the programmes were produced. One of the last RAVAG transmissions was Schuschnigg's farewell address on March 11 ("God save Austria"). Only hours later, live broadcasts featured the cheering devotees of his Nazi successor Arthur Seyss-Inquart, the triumphant entry of Adolf Hitler in Linz the next day, and his speech on Vienna Heldenplatz. In 1939, the former RAVAG transmission facilities were taken over by the German Reichspost.

In World War II, listening to Feindsender ("enemy-radio-stations") became a capital offence, however, especially the German language programmes of the BBC were a widely used information source. Reichssender Wien transmissions were important for strategic bombing alerts. The Funkhaus broadcasting centre itself was damaged by Allied bombs in January and February 1945, followed by the Red Army Vienna Offensive. Reichssender Wien last aired 6 April, before retiring SS troops blew up the Bisamberg transmitter.

Following the Wehrmacht defeat, independent Austrian RAVAG radio broadcasting resumed in Allied-occupied Austria 24 April 1945, when it announced the formation of a provisional Austrian state government led by Karl Renner. A new Radio Wien station was founded, broadcasting from Funkhaus Wien by a provisional transmitter on the rooftop, once again under Oskar Czeija, who nevertheless was ousted shortly afterwards on pressure by the Soviet military administration. As the Funkhaus was located in the Soviet occupation sector of Vienna, the Western Allies established own radio stations like British Alpenland network or US Radio Rot-Weiß-Rot, as well as the English-speaking "Blue Danube" armed forces network (BDN) and the British Forces Network (BND), which became quite popular with younger Austrian listeners. The RAVAG transmissions limited to the East Austrian Soviet occupation zone, and in the beginning Cold War era were increasingly considered Communist propaganda broadcasting.

A number of other radio stations began broadcasting in the different occupation zones and radio become a popular medium among Austrians: in 1952 there were 1.5 million radio sets in Austrian homes. The Western Allies could operate their programmes nationwide from Vienna, with a significantly higher popularity rating than the outdated RAVAG transmissions. In 1955, the various regional stations were brought together as the Österreichisches Rundspruchwesen ("Austrian Broadcasting Entity") which later, in 1958, became the Österreichischer Rundfunk GmbH, forerunner of today's ORF. 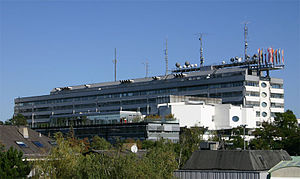 All of these radio channels are broadcast terrestrially on FM and via the digital service of the SES Astra satellites at 19.2° east.

All of ORF's domestic radio channels are also streamed over the internet. An extra 24-hour all-news channel is available exclusively via internet: this is Ö1-Inforadio which relays all of Ö1's news content and fills the "gaps", during which Ö1 is transmitting music and cultural programmes, with additional news broadcasts.

A version of Ö1 is broadcast internationally via short wave (and satellite in Europe) as Ö1 International. Its schedule includes a small number of programmes in English and Spanish.

An additional service, Radio 1476, formerly broadcast on medium wave each evening from 18.00 until just after midnight. Its schedule was a mixture of items from Ö1, programmes for linguistic and cultural minorities, folk music, and special productions.

The ORF television channels are broadcast terrestrially and via the SES Astra 1H satellite at 19.2° east. Via satellite ORF eins and ORF2 are encrypted, allowing only Austrian residents who pay the Austrian television licence (Gebühren Info Service, "GIS") to watch them. ORF2 Europe is unencrypted and receivable via satellite in Europe.

ORF is a supporter of the Hybrid Broadcast Broadband TV (HbbTV) initiative (a consortium of broadcasting and Internet industry companies including SES, OpenTV and Institut für Rundfunktechnik) that is promoting and establishing an open European standard for hybrid set-top boxes for the reception of broadcast TV and broadband multimedia applications with a single user interface.

Most of Austria's best known TV stars are working for ORF. According to surveys the most prominent television presenter in the country is former alpine skier Armin Assinger who is the host of the "Millionen-Show", Austria's version of Who Wants to Be a Millionaire? Mirjam Weichselbraun, a former MTV presenter is hosting Austria's edition of Dancing With the Stars. The most popular comedy show on ORF is Wir sind Kaiser ("We are Emperor") with comedian Robert Palfrader playing Emperor Robert Heinrich I, inviting celebrity guests to make fun of them. The best known news anchors are talk show host Ingrid Thurnher who was given seven Romy awards as most popular presenter; Armin Wolf who is best known for his hard-hitting interviews on the late evening news show ZiB 2; and Gabi Waldner, moderator of the weekly political magazine Report.