From Infogalactic: the planetary knowledge core
Jump to: navigation, search
This article is about the death notice. For other uses, see Obituary (disambiguation).
"Necrology" redirects here. For the EP by General Surgery, see Necrology (EP). 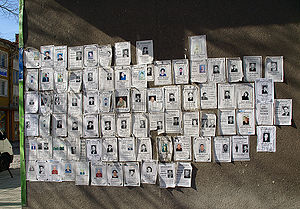 An obituary is a news article that reports the recent death of a person, typically along with an account of the person's life and information about the upcoming funeral.[1] In large cities and larger newspapers, obituaries are written only for people considered significant.[1] In local newspapers, an obituary may be published for any local resident upon death. A necrology is a register or list of records of the deaths of people related to a particular organization, group or field, which may only contain the sparsest details, or small obituaries. Historical necrologies can be important sources of information.

A premature obituary is a false reporting of the death of a person who is still alive. It may occur due to unexpected survival of someone who was close to death. Other reasons for such publication might be miscommunication between newspapers, family members, and the funeral home, often resulting in embarrassment for everyone involved.

Irish author Brendan Behan said that there is no such thing as bad publicity except dying in a toilet. In this regard, some people will seek to have an unsuspecting newspaper editor publish a premature death notice or obituary as a malicious hoax, perhaps to gain revenge on the "deceased". To that end, nearly all newspapers now have policies requiring that death notices come from a reliable source (such as a funeral home), though even this has not stopped some pranksters such as Alan Abel.

Many news organisations have pre-written (or pre-edited video) obituaries on file for notable individuals who are still living, allowing detailed, authoritative, and lengthy obituaries to appear very quickly after their death. The Los Angeles Times' obituary of Elizabeth Taylor, for example, was written in 1999 after three months of research, then often updated before the actress' 2011 death.[2] Sometimes the prewritten obituary's subject outlives its author; an example is The New York Times' obituary of Taylor, written by the newspaper's theater critic Mel Gussow, who died in 2005.[3]

Obituaries are a notable feature of The Economist, which publishes one full-page obituary per week, reflecting on the subject's life and influence on world history. Past subjects have ranged from Ray Charles to Uday Hussein.

The British Medical Journal encourages doctors to write their own obituaries for publication after their death.[citation needed][clarification needed]

Pan Books publishes a series called The Daily Telegraph Book of Obituaries, which are anthologies of obituaries under a common theme, such as military obituaries, sports obituaries, heroes and adventurers, entertainers, rogues, eccentric lives, etc.

For numerous summer seasons, CBC Radio One has run The Late Show, a radio documentary series which presents extended obituaries of interesting Canadians.