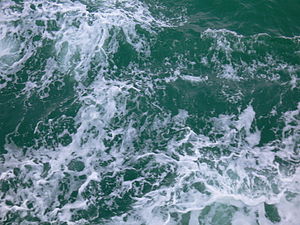 Due to the higher density of sea water (1,030 kg m−3) than air (1.2 kg m−3), the force exerted by the same velocity on an organism is 827 times stronger in the ocean. When waves crash on the shore, the force exerted on littoral organisms can be equivalent to several tons.

Water flow can be described as laminar or turbulent.[2] Laminar flow is characterized by smooth motion: neighboring particles advected by such a flow will follow similar paths. Turbulent flow is dominated by re-circulation, whorls, eddies and apparent randomness. In such a flow particles which are neighbors at one moment can find themselves widely separated later.

Reynolds number is the ratio of inertial forces to viscous forces. As the size of an organism and the strength of the current increases, inertial forces will eventually dominate, and the flow becomes turbulent (large Re). As the size and strength decrease, viscous forces eventually dominate and the flow becomes laminar (small Re).

Biologically there is an important distinction between plankton and nekton. Plankton are the aggregate of relatively passive organisms which float or drift with the currents, such as tiny algae and bacteria, small eggs and larvae of marine organisms, and protozoa and other minute predators. Nekton are the aggregate of actively swimming organisms which are able to move independently of water currents, such as shrimps, forage fish and sharks.

One result of Bernoulli's Principle is that slower moving current has higher pressure. This principle is used, for example, by some benthic suspension feeders. These smart guys dig holes like U tubes with one end higher than the other end. Because of bottom drag, as water flows over the bottom the lower tube opening has a lower fluid speed and thus a higher pressure than the upper tube opening. The benthic suspension feeder can hide in the tube as the pressure difference between the tube ends drives water and suspended particles through the tube.

The body shapes of many benthic creatures also exploit Bernoulli's Principle not only decrease the friction and drag but also to create lift when they move through the current. 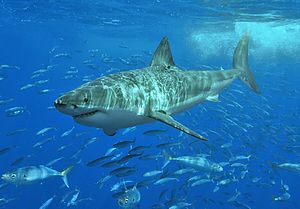 Drag is the tendency of an object to move in the direction of the flow. The magnitude of drag depends on the current velocity, the shape and size of the organism and the density of the fluid. Drag is a dissipative process which generally results in the generation of heat.

In sea water, drag can be decomposed into two different forms: skin friction and pressure drag.

Besides being soft and flexible, organisms have other methods to minimize drag.