From Infogalactic: the planetary knowledge core
Jump to: navigation, search
This article is about the personification of the world-ocean in Greek myth. For other uses, see Oceanus (disambiguation).

Oceanus (/oʊˈsiːənəs/; Greek: Ὠκεανός Ōkeanós,[2] pronounced [ɔːkeanós]) was a divine figure in classical antiquity, believed by the ancient Greeks and Romans to be the divine personification of the sea, an enormous river encircling the world.

Strictly speaking, Oceanus was the ocean-stream at the Equator in which floated the habitable hemisphere (οἰκουμένη, oikoumene).[3] Thus, the sun rises from the deep-flowing Oceanus in the east[4] and at the end of the day sinks back into the Oceanus in the west.[5] In Greek mythology, this world-ocean was personified as a Titan, a son of Uranus and Gaea. In Hellenistic and Roman mosaics, this Titan was often depicted as having the upper body of a muscular man with a long beard and horns (often represented as the claws of a crab) and the lower body of a serpent (cf. Typhon). On a fragmentary archaic vessel of circa 580 BC (British Museum 1971.11-1.1), among the gods arriving at the wedding of Peleus and the sea-nymph Thetis, is a fish-tailed Oceanus, with a fish in one hand and a serpent in the other, gifts of bounty and prophecy. In Roman mosaics, such as that from Bardo he might carry a steering-oar and cradle a ship.

Some scholars believe that Oceanus originally represented all bodies of salt water, including the Mediterranean Sea and the Atlantic Ocean, the two largest bodies known to the ancient Greeks. However, as geography became more accurate, Oceanus came to represent the stranger, more unknown waters of the Atlantic Ocean (also called the "Ocean Sea"), while the newcomer of a later generation, Poseidon, ruled over the Mediterranean.

Oceanus' consort is his sister Tethys, and from their union came the ocean nymphs, also known as the three-thousand Oceanids, and all the rivers of the world, fountains, and lakes.[6] From Cronus, of the race of Titans, the Olympian gods have their birth, and Hera mentions twice in Iliad book XIV her intended journey "to the ends of the generous earth on a visit to Oceanus, whence the gods have risen, and Tethys our mother who brought me up kindly in their own house."[7]

In ancient literature and legend

This excerpt tells of the role of Oceanus in the Titanomachy:

After the first Dionysus [Zagreus] had been slaughtered, Father Zeus ... attacked the mother of the Titanes [Gaia the Earth] with avenging brand, and shut up the murderers of horned Dionysus [the Titans dismembered the godling Zagreus] within the gate of Tartarus [after a long war]: the trees blazed, the hair of suffering Gaea (Earth) was scorched with heat . . . Now Okeanos poured rivers of tears from his watery eyes, a libation of suppliant prayer. Then Zeus claimed his wrath at the sight of the scorched earth; he pitied her, and wished to wash with water the ashes of ruin and the fiery wounds of the land. Then Rainy Zeus covered the whole sky with clouds and flooded all the earth [in the Great Deluge of Deukalion].

In the Iliad, the rich iconography of Achilles' shield, as fashioned by Hephaestus, is enclosed, as the world itself was believed to be, by Oceanus:

Then, running round the shield-rim, triple-ply,

he pictured all the might of the Ocean stream.

When Odysseus and Nestor walk together along the shore of the sounding sea (Iliad IX.182) they address their prayers "to the great Sea-god who girdles the world". It is to Oceanus, not to Poseidon, that their thoughts are directed.

Invoked in passing by poets and figured as the father of rivers and streams, and thus the progenitor of river gods, Oceanus appears only once in myth, as a representative of the archaic world that Heracles constantly threatened and bested.[9] Heracles forced Helios to lend him his golden bowl, in order to cross the wide expanse of the Ocean on his trip to the Hesperides. When Oceanus tossed the bowl about, Heracles threatened him and stilled his waves. The journey of Heracles in the sun-bowl upon Oceanus became a favored theme among painters of Attic pottery. 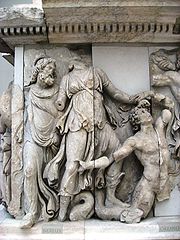 Oceanus, at right, with scaly tail, in the Gigantomachy of the Pergamon Altar.

Oceanus appears in Hellenic cosmography as well as myth. Cartographers continued to represent the encircling equatorial stream much as it had appeared on Achilles' shield.[10]

Though Herodotus was skeptical about the physical existence of Oceanus, he rejected snowmelt as a cause of the annual flood of the Nile river; according to his translator and interpreter, Livio Catullo Stecchini, he left unsettled the question of an equatorial Nile, since the geography of Sub-Saharan Africa was unknown to him.

Apollonius of Rhodes calls the lower Danube the Keras Okeanoio (Gulf or Horn of Oceanus) in Argonautica (IV. 282).

Hecateus of Abdera writes that the Oceanus of the Hyperboreans is neither the Arctic Ocean nor Western Ocean, but the sea located to the north of the ancient Greek world, called "the most admirable of all seas" by Herodotus (lib. IV 85), called the "immense sea" by Pomponius Mela (lib. I. c. 19) and by Dionysius Periegetes (Orbis Descriptio, v. 165), and which is named Mare majus on medieval geographic maps.

At the end of the Okeanos Potamos, is the holy island of Alba (Leuke, Pytho Nisi, Isle of Snakes), sacred to the Pelasgian (and later, Greek) Apollo, greeting the sun rising in the east. Hecateus of Abdera refers to Apollo's island from the region of the Hyperboreans, in the Oceanus. It was on Leuke, in one version of his legend, that the hero Achilles, in a hilly tumulus, was buried (to this day, one of the mouths of the Danube is called Chilia). Leto, the Hyperborean goddess, after nine days and nine nights of labour on the island of Delos (Pelasgian for hill, related to tell) "gave birth to the great god of the antique light" (Pseudo-Apollodorus, Bibliotheca, I. 4.1). Old Romanian folk songs sing of a white monastery on a white island with nine priests, nine singers, nine altars, on a part of the Black Sea known as the White Sea.[12]

Genealogy of the Olympians in Greek mythology