audio (help·info); March 31, 1914 – April 19, 1998) was a Mexican poet-diplomat and writer. He is considered one of the most influential writers of the 20th century and one of the greatest Hispanic poets of all time.

For his body of work, he was awarded the 1981 Miguel de Cervantes Prize, the 1982 Neustadt International Prize for Literature, and the 1990 Nobel Prize in Literature.

Octavio Paz was introduced to literature early in his life through the influence of his grandfather's library, filled with classic Mexican and European literature.[1] During the 1920s, he discovered the European poets Gerardo Diego, Juan Ramón Jiménez, and Antonio Machado, Spanish writers who had a great influence on his early writings.[2] As a teenager in 1931, Paz published his first poems, including "Cabellera". Two years later, at the age of 19, he published Luna Silvestre ("Wild Moon"), a collection of poems. In 1932, with some friends, he founded his first literary review, Barandal. In 1937 at the age of 23, Paz abandoned his law studies and left Mexico City for Yucatán to work at a school in Mérida, set up for the sons of peasants and workers.[3] There, he began working on the first of his long, ambitious poems, "Entre la piedra y la flor" ("Between the Stone and the Flower") (1941, revised in 1976). Influenced by the work of T. S. Eliot, it explores the situation of the Mexican peasant under the domineering landlords of the day.[4] In 1937, Paz was invited to the Second International Writers Congress in Defense of Culture in Spain during the country's civil war; he showed his solidarity with the Republican side and against fascism. Upon his return to Mexico, Paz co-founded a literary journal, Taller ("Workshop") in 1938, and wrote for the magazine until 1941. In 1937 he married Elena Garro, who is considered one of Mexico's finest writers. They had met in 1935. They had one daughter, Helena, and were divorced in 1959. In 1943, Paz received a Guggenheim fellowship and used it to study at the University of California at Berkeley in the United States. Two years later he entered the Mexican diplomatic service, and was assigned for a time to New York City. In 1945, he was sent to Paris, where he wrote El Laberinto de la Soledad ("The Labyrinth of Solitude"). The New York Times later described it as "an analysis of modern Mexico and the Mexican personality in which he described his fellow countrymen as instinctive nihilists who hide behind masks of solitude and ceremoniousness."[5] In 1952, he travelled to India for the first time. That same year, he went to Tokyo, as chargé d'affaires. He next was assigned to Geneva, Switzerland. He returned to Mexico City in 1954, where he wrote his great poem "Piedra de sol" ("Sunstone") in 1957, and published Libertad bajo palabra (Liberty under Oath), a compilation of his poetry up to that time. He was sent again to Paris in 1959. In 1962 he was named Mexico's ambassador to India.

In India, Paz completed several works, including El mono gramático (The Monkey Grammarian) and Ladera este (Eastern Slope). While in India, he met numerous writers of a group known as the Hungry Generation and had a profound influence on them. He met his first wife Elena Garro a writer in Mexico City and was married to her in 1937, they were together until 1959. They had a daughter Helena Laura Paz Garro. In 1965, he married Marie-José Tramini, a French woman who would be his wife for the rest of his life. In October 1968, he resigned from the diplomatic service in protest of the Mexican government's massacre of student demonstrators in the Plaza de las Tres Culturas in Tlatelolco.[6]

After staying in Paris for refuge, he returned to Mexico in 1969. He founded his magazine Plural (1970–1976) with a group of liberal Mexican and Latin American writers.

From 1969 to 1970 he was Simon Bolivar Chair Professor at Cambridge University. From 1970 to 1974 he lectured at Harvard University, where he held the Charles Eliot Norton professorship. His book Los hijos del limo ("Children of the Mire") was the result of those lectures. After the Mexican government closed Plural in 1975, Paz founded Vuelta, another cultural magazine. He was editor of that until his death in 1998, when the magazine closed.

He won the 1977 Jerusalem Prize for literature on the theme of individual freedom. In 1980, he was awarded an honorary doctorate from Harvard, and in 1982, he won the Neustadt Prize. Once good friends with novelist Carlos Fuentes, Paz became estranged from him in the 1980s in a disagreement over the Sandinistas, whom Paz opposed and Fuentes supported.[7] In 1988, Paz's magazine Vuelta published criticism of Fuentes by Enrique Krauze, resulting in estrangement between Paz and Fuentes, who had long been friends.[8]

Guillermo Sheridan, who was named by Paz as director of the Octavio Paz Foundation in 1998, published a book, Poeta con paisaje (2004) with several biographical essays about the poet's life up to 1968.

"The poetry of Octavio Paz," wrote the critic Ramón Xirau, "does not hesitate between language and silence; it leads into the realm of silence where true language lives."[13]

A prolific author and poet, Paz published scores of works during his lifetime, many of which have been translated into other languages. His poetry has been translated into English by Samuel Beckett, Charles Tomlinson, Elizabeth Bishop, Muriel Rukeyser and Mark Strand. His early poetry was influenced by Marxism, surrealism, and existentialism, as well as religions such as Buddhism and Hinduism. His poem, "Piedra de sol" ("Sunstone"), written in 1957, was praised as a "magnificent" example of surrealist poetry in the presentation speech of his Nobel Prize.

His later poetry dealt with love and eroticism, the nature of time, and Buddhism. He also wrote poetry about his other passion, modern painting, dedicating poems to the work of Balthus, Joan Miró, Marcel Duchamp, Antoni Tàpies, Robert Rauschenberg, and Roberto Matta. As an essayist Paz wrote on topics such as Mexican politics and economics, Aztec art, anthropology, and sexuality. His book-length essay, The Labyrinth of Solitude (Spanish: El laberinto de la soledad), delves into the minds of his countrymen, describing them as hidden behind masks of solitude. Due to their history, their identity is lost between a pre-Columbian and a Spanish culture, negating either. A key work in understanding Mexican culture, it greatly influenced other Mexican writers, such as Carlos Fuentes. Ilan Stavans wrote that he was "the quintessential surveyor, a Dante's Virgil, a Renaissance man".[14] 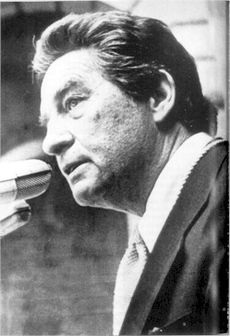 Paz wrote the play La hija de Rappaccini in 1956. The plot centers around a young Italian student who wanders about Professor Rappaccini's beautiful gardens where he spies the professor's daughter Beatrice. He is horrified to discover the poisonous nature of the garden's beauty. Paz adapted the play from an 1844 short story by American writer Nathaniel Hawthorne, which was also entitled "Rappaccini's Daughter". He combined Hawthorne's story with sources from the Indian poet Vishakadatta and influences from Japanese Noh theatre, Spanish autos sacramentales, and the poetry of William Butler Yeats. The play's opening performance was designed by the Mexican painter Leonora Carrington. In 1972, Surrealist author André Pieyre de Mandiargues translated the play into French as La fille de Rappaccini (Editions Mercure de France). First performed in English in 1996 at the Gate Theatre in London, the play was translated and directed by Sebastian Doggart and starred Sarah Alexander as Beatrice.

The Mexican composer Daniel Catán adapted the play as an opera in 1992.

Paz's other works translated into English include several volumes of essays, some of the more prominent of which are Alternating Current (tr. 1973), Configurations (tr. 1971), in the UNESCO Collection of Representative Works,[15] The Labyrinth of Solitude (tr. 1963), The Other Mexico (tr. 1972); and El Arco y la Lira (1956; tr. The Bow and the Lyre, 1973). In the United States, Helen Lane's translation of Alternating Current won a National Book Award.[16] Along with these are volumes of critical studies and biographies, including of Claude Lévi-Strauss and Marcel Duchamp (both, tr. 1970), and The Traps of Faith, an analytical biography of Sor Juana Inés de la Cruz, the Mexican 17th-century nun, feminist poet, mathematician, and thinker.

His works include the poetry collections ¿Águila o sol? (1951), La Estación Violenta, (1956), Piedra de Sol (1957), and in English translation the most prominent include two volumes that include most of Paz in English: Early Poems: 1935–1955 (tr. 1974), and Collected Poems, 1957–1987 (1987). Many of these volumes have been edited and translated by Eliot Weinberger, who is Paz's principal translator into American English.

Originally Paz supported the Republicans during the Spanish Civil War, but after learning of the murder of one of his friends by the Republicans, he became gradually disillusioned. While in Paris in the early 1950s, influenced by David Rousset, André Breton and Albert Camus, he started publishing his critical views on totalitarianism in general, and particularly against Joseph Stalin, leader of the Soviet Union.

In his magazines Plural and Vuelta, Paz exposed the violations of human rights in communist regimes, including Castro's Cuba. This brought him much animosity from sectors of the Latin American left. In the prologue to Volume IX of his complete works, Paz stated that from the time when he abandoned communist dogma, the mistrust of many in the Mexican intelligentsia started to transform into an intense and open enmity. Paz continued to consider himself a man of the left, the democratic, "liberal" left, not the dogmatic and illiberal one. He also criticized the Mexican government and leading party that dominated the nation for most of the 20th century.

In 1990, during the aftermath of the fall of the Berlin wall, Paz and his Vuelta colleagues invited several of the world's writers and intellectuals to Mexico City to discuss the collapse of communism. Writers included Czesław Miłosz, Hugh Thomas, Daniel Bell, Ágnes Heller, Cornelius Castoriadis, Hugh Trevor-Roper, Jean-François Revel, Michael Ignatieff, Mario Vargas Llosa, Jorge Edwards and Carlos Franqui. The encounter was called The experience of freedom (Spanish: La experiencia de la libertad) and broadcast on Mexican television from 27 August to 2 September.[18]

Paz criticized the Zapatista uprising in 1994.[19] He spoke broadly in favor of a "military solution" to the uprising of January 1994, and hoped that the "army would soon restore order in the region". With respect to President Zedillo's offensive in February 1995, he signed an open letter that described the offensive as a "legitimate government action" to reestablish the "sovereignty of the nation" and to bring "Chiapas peace and Mexicans tranquility".[20]