Ogden /ˈɒɡdɛn/ is a city and the county seat of Weber County,[4] Utah, United States, approximately 10 miles (16 km) east of the Great Salt Lake and 40 miles (64 km) north of Salt Lake City. The population was 84,316 in 2014, according to the US Census Bureau.[5] The city served as a major railway hub through much of its history,[6] and still handles a great deal of freight rail traffic which makes it a convenient location for manufacturing and commerce. Ogden is also known for its many historic buildings, proximity to the Wasatch Mountains, and as the location of Weber State University.

Ogden is a principal city of the Ogden–Clearfield, Utah Metropolitan Statistical Area, which includes all of Weber, Morgan, and Davis counties. The 2010 Census placed the Metro population at 547,184.[7] In 2010, Forbes rated the Ogden-Clearfield MSA as the 6th best place to raise a family.[8] Ogden has had a Sister City relationship to Hof (Germany) since 1954.

Originally named Fort Buenaventura, the city of Ogden was the first permanent settlement by people of European descent in the region that is now Utah. It was established by the trapper Miles Goodyear in 1846 about a mile west of where downtown Ogden is currently located. In November 1847, Fort Buenaventura was purchased by the Mormon settlers for $1,950.[citation needed] The settlement was then called Brownsville, after Captain James Brown, but was later named Ogden for a brigade leader of the Hudson's Bay Company, Peter Skene Ogden, who had trapped in the Weber Valley a generation earlier. The site of the original Fort Buenaventura is now a Weber County park.

Ogden is the closest sizable city to the Golden Spike location at Promontory Summit, Utah, where the First Transcontinental Railroad was joined in 1869. Ogden was known as a major passenger railroad junction owing to its location along major east-west and north-south routes, prompting the local chamber of commerce to adopt the motto, "You can't get anywhere without coming to Ogden."[9] Railroad passengers traveling west to San Francisco from the eastern United States typically passed through Ogden (and not through the larger Salt Lake City to the south). Ogden, however, is no longer served by Amtrak, the national passenger rail system, and passengers desiring to travel from Ogden by rail must travel via FrontRunner commuter rail to Salt Lake City and Provo.

In 1972, The Church of Jesus Christ of Latter-day Saints completed construction of and dedicated the Ogden Utah Temple in Ogden. The temple was built to serve the large LDS population in the area. In 2010, the LDS Church announced a major renovation of the Ogden Temple and the adjacent Tabernacle. The work, which began in 2011, includes completely changing the dated 1970's exterior, removing the steeple from the Tabernacle so as to make the Temple's steeple a main focus, as well as a new underground parking garage and gardens.[10] The Temple was rededicated in 2014.[11]

Because Ogden has historically been the second largest city in Utah, it is home to a large number of historic buildings. However, by the 1980s, several Salt Lake City suburbs and Provo had surpassed Ogden in population.

The Defense Depot Ogden Utah operated in Ogden from 1941 to 1997. Some of its 1,128 acres (456 ha) has since been converted into a commercial and industrial park called the Business Depot Ogden.

"Ogden" sign over Washington Boulevard at the Ogden River; toward downtown

The Ogden and Weber Rivers, which originate in the mountains to the east, flow through the city and meet at a confluence just west of the city limits. Pineview Dam is located in the Ogden River Canyon 7 miles (11 km) east of Ogden. The reservoir behind the dam provides over 110,000 acre feet (140,000,000 m3) of water storage and water recreation for the area.

Prominent mountain peaks near Ogden include Mount Ogden to the east and Ben Lomond to the north.

Ogden experiences a dry summer continental climate (Köppen climate classification Dsa). Summers are hot and dry, with highs frequently reaching 95 °F (35 °C), with a few days per year reaching 100 °F (38 °C). Rain is provided in the form of infrequent thunderstorms during summer, usually between mid-July and mid-September during the height of monsoon season. The Pacific storm season usually lasts from about October through May, with precipitation reaching its peak in spring. Snow usually first occurs in late October or early November, with the last occurring sometime in April. Winters are cool and snowy, with highs averaging 37 °F (3 °C) in January. Snowfall averages about 22 inches (0.56 m), with approximately 23.67 inches (601 mm) of precipitation annually. Extremes range from −16 °F (−27 °C), set on January 26, 1949, to 106 °F (41 °C), set on July 14, 2002.[13]

There were 27,384 households out of which 35.2% had children under the age of 18 living with them, 48.4% were married couples living together, 13.1% had a female householder with no husband present, and 32.8% were non-families. 26.2% of all households were made up of individuals and 9.6% had someone living alone who was 65 years of age or older. The average household size was 2.73 and the average family size was 3.32. 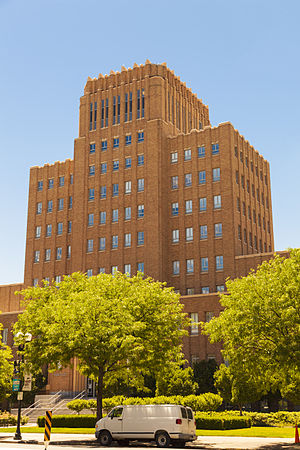 Ogden is governed under the mayor-council form of government, in which the full-time mayor serves as executive while the seven-member part-time council serves as the legislative branch. All of these elected officials serve four-year terms, with elections occurring in odd-numbered years and terms beginning in January of even-numbered years.

The Ogden City government operates on a budget of somewhat over $100 million per year and employs nearly 600 full-time workers.[17] In addition to providing the usual municipal services, the government is actively engaged in promoting business and economic development. The city operates a redevelopment agency (RDA),[18] with the city council acting as the RDA governing board and the mayor as its executive director. The RDA's activity has steadily increased since its establishment in 1969, with tax increment revenues currently at about $10 million per year and an outstanding debt of over $50 million. Nearly all of Ogden's central business district is now covered by designated redevelopment districts, as are Business Depot Ogden and several other industrial areas in the western parts of the city.

Much of the recent political discourse in Ogden has focused on controversial government-sponsored development projects in the downtown area, including the Ogden Eccles Conference Center, Lindquist Field, The Junction, the Ogden River Project,[19] and other proposals that have not moved forward.[20][21] A proposed streetcar connecting downtown to Weber State University has attracted considerable attention but only limited support.[22] A major controversy flared up in 2005–07 when the mayor and many others pushed unsuccessfully for construction of a luxury residential development on public land in Ogden's foothills and a new ski resort in the mountains above the city, to be accessed by a pair of aerial gondolas.[23] Other local political concerns include Ogden’s relatively high tax[24] and utility[25] rates, efforts to fight crime,[26] allegations of government corruption,[27][28] and challenges facing the Ogden City schools.[29][30] 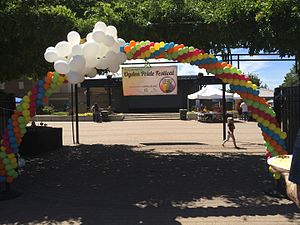 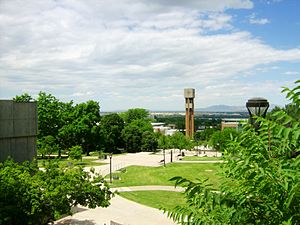 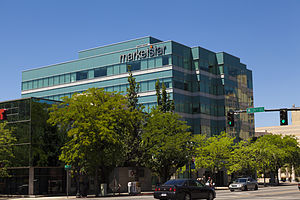 As the principal city of the 2nd largest MSA in Utah, Ogden serves as an economic hub for the northern part of the state. Much of the central city is occupied by offices of various federal, state, county, and municipal government entities. The Internal Revenue Service has a large regional facility in Ogden and is the city's largest employer with over 5,000 employees.[33] Other large employers include McKay Dee Hospital, Weber State University, Ogden City School District, Autoliv, Fresenius, and Convergys.[34]

Several industrial areas are found in the western parts of the city. The largest of these is Business Depot Ogden, a former Army depot that was restructured to be a 1,000-plus acre business park.[36] 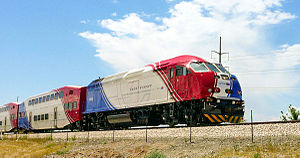 FrontRunner commuter rail, which runs between Provo and Ogden, via Salt Lake City

Interstates 15 and 84 serve the city. I-84 runs east-west through the southern suburbs, merging with I-15 near Riverdale. I-15 runs north-south near the city's western edge and provides connections to the rest of the Wasatch Front and beyond. Ogden is served directly by exits 341, 342, 343, and 344. US-89 enters the city from the south, running through the city as Washington Boulevard, which serves as the main street of Ogden. It then continues north to Brigham City. State Route 39 runs east-west through the city as 12th Street, and continues eastward through Ogden Canyon providing access to Pineview Reservoir and the mountain and ski resort town of Huntsville.

The Utah Transit Authority (UTA) operates four bus routes directly between Salt Lake City and Ogden, as well as numerous others that serve Weber and northern Davis counties that connect into either the Ogden Intermodal Hub on the west edge of town or to Weber State University. Ogden is also the source of the two routes that serve Brigham City, the northernmost extension of UTA's bus system. It also has a Greyhound bus stop along a line that runs north-south along I-15. The FrontRunner commuter rail is now open and runs between Salt Lake City and Pleasant View, just north of Ogden, and includes a stop at the Ogden Intermodal Hub. This line opened for service on April 26, 2008.

Ogden-Hinckley Airport, Utah's busiest municipal airport, is located in the southwest portion of the city. Allegiant Air offers commercial service from Ogden to Phoenix and Mesa, AZ. Utah Airways offers charter service to many of the West’s national parks.[38] 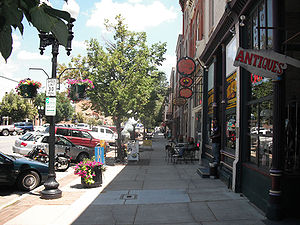 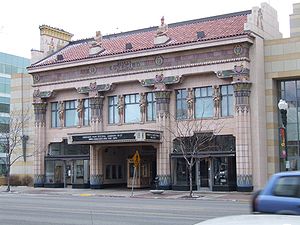 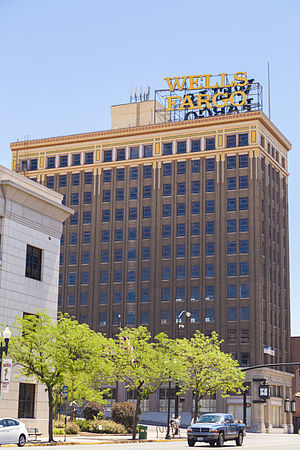 The mountains and rivers near Ogden offer diverse opportunities for outdoor recreation.

An extensive trail system, immediately adjacent to the city's eastern edge, gives residents and visitors immediate access to the foothills of the Wasatch Range. The foothill trails are used for hiking, running, mountain biking, and sometimes snowshoeing and cross-country skiing. Steeper trails climb eastward into the mountains, and many other mountain trails originate within a few miles of the city. A system of paved urban trails runs along the banks of the Ogden and Weber Rivers.[39]

The quartzite cliffs above Ogden's foothills provide a variety of rock climbing routes. An extensive boulder field in the foothills is one of the most popular bouldering sites in the state. 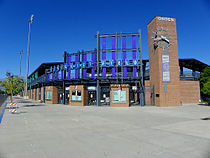 Lindquist Field, home of the Raptors

Kayaking is a popular sport on portions of the Ogden and Weber Rivers. A developed kayak park lies on the Weber River in the western portion of the city. The reservoirs near Ogden are used for a wide variety of water sports.

There are several golf courses located in the city of Ogden.[40]

Ogden is a satellite venue of the Sundance Film Festival. A local film festival, now called the Foursite Film Festival, has been held annually since 2004. Other events of interest include a downtown farmer's market, the Ogden Arts Festival, the Harvest Moon Festival, Ogden Winterfest and the Ogden Marathon.[41]

Ogden has had two shopping malls. Newgate Mall was built in 1981, and Ogden City Mall a year prior. The latter was torn down and redeveloped as The Junction.

Panoramic video clip of Ogden recorded on the Bonneville Shoreline Trail at 5,111 ft (1,558 m) Clip pans from south to west to north

Ogden was the site of the infamous Hi-Fi Murders in 1974.

Flying J, the largest retailer of diesel fuel in North America, has its corporate headquarters in Ogden.

In 2009, Ogden ranked No. 5 on Newsmax magazine's list of the "Top 25 Most Uniquely American Cities and Towns," a piece written by current CBS News travel editor Peter Greenberg. According to the magazine, Greenberg based the rankings on a variety of features, such as quality of schools and proximity to medical care, as well as culture, hospitality, and scenic beauty.[42]