From Infogalactic: the planetary knowledge core
Jump to: navigation, search
Not to be confused with Oil City, Cambria County, Pennsylvania.
For other places with the same name, see Oil City (disambiguation).

Oil City is a city in Venango County, Pennsylvania, that is known in the initial exploration and development of the petroleum industry. After the first oil wells were drilled nearby in the 1850s, Oil City became central in the petroleum industry while hosting headquarters for the Pennzoil, Quaker State, and Wolf's Head motor oil companies. Tourism plays a prominent role in the region by promoting oil heritage sites, nature trails, and Victorian architecture. The population was 10,557 at the 2010 census, and is the principal city of the Oil City, PA Micropolitan Statistical Area. 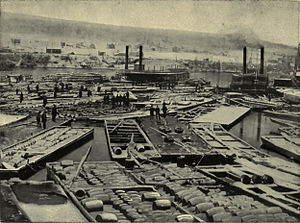 In the early 17th century, the Seneca nation first settled in the region; by, the late 18th century Chief Cornplanter was given three tracts of land as a "gift" from the State of Pennsylvania. In 1818, local prospectors purchased the land and built a blast furnace, which closed in the early 1850s. As population in the area began to decline, Colonel Edwin L. Drake drilled the first commercially successful oil well on August 27, 1859, in nearby Titusville. A number of boomtowns came to life in the region, including Oil City, Titusville, Petroleum Center, Pithole, and Rynd Farm.

Barges were used to transport the oil down Oil Creek and into Oil City, where it was transported to steamboats or bulk barges to continue on to Pittsburgh and other locations. Oil City was founded in 1860,[citation needed] incorporated as a borough in 1868,[citation needed] and chartered as a city in 1874.[citation needed] The Borough of Oil City was incorporated as a city in 1871.[citation needed] The city was partially destroyed by flood in 1865 and by both flood and fire in 1866 and again in 1892; on this last occasion, several oil tanks that were struck by lightning gave way, and Oil Creek carried a mass of burning oil into the city, where some 60 lives were lost and property valued at more than $1 million was destroyed. Oil City grew into a thriving community through the later half of the 19th century and into the 20th century. By the 1990s, Pennzoil, Quaker State, and Wolf's Head had all relocated their headquarters elsewhere. However, some oil wells continue to produce a steady supply of quality petroleum.

Regional governments and public organizations promote tourism by thoroughly educating the public about oil history. Oil City's location along the Allegheny River in the foothills of the Appalachian Mountains provides excellent opportunities for exploring Northwestern Pennsylvania.

Oil City, Pennsylvania is located at the confluence of the Allegheny River and Oil Creek at Lua error in Module:Coordinates at line 668: callParserFunction: function "#coordinates" was not found..[2] According to the United States Census Bureau, the city has a total area of 4.7 square miles (12 km2), of which, 4.5 square miles (12 km2) is land and 0.2 square miles (0.52 km2) (4.65%) is water.

Many layers of rock and sedimentary material containing fossils can be seen on the bluffs in and around Oil City. Oil City is framed by the surrounding foothills with the Allegheny River winding through downtown.

The Allegheny River and Oil Creek freeze occasionally during the winter, sometimes causing ice jams; although remediation by the U.S. Army Corps of Engineers has reduced ice formation via a floating ice control structure on the river and a fixed concrete weir on the banks of the creek.[3] Flooding of the river flats is a possibility throughout the year due to ice jams, excessive snow melt, large volume storms and hurricane or tropical storm remnants.

There were 4,762 households out of which 30.2% had children under the age of 18 living with them, 44.8% were married couples living together, 12.7% had a female householder with no husband present, and 37.4% were non-families. 32.7% of all households were made up of individuals and 16.0% had someone living alone who was 65 years of age or older. The average household size was 2.37 and the average family size was 2.99.

In recent years, Oil City has undergone a renovation of the downtown area. Older sidewalks were replaced with new sidewalks along with a Victorianization of the architecture in the Historic District. Anodized bronze plaques have been mounted near historic areas to describe the event that happened there.

Main Street Program: The Main Street Program vitally contributes to the economic and aesthetic development of downtown Oil City. In 2014, as part of the Oil Region Alliance and Main Street's effort, Oil City became a part of the Trail Town Program (www.trailtowns.org). Throughout the year, Main Street organizes various business related workshops, fundraisers, community events, and partners with the City and civic groups to sustain a vibrant downtown district.

Arts and Culture The Oil City Arts and Culture Commission, is the main entity that develops the local art and entertainment scene. It offers all year round public events for music, festivals, performing and visual arts. This commission was the first attempt that Oil City made to promote and foster the public interest and appreciation of all the arts. Two established galleries under this commission are: Transit Fine Arts Gallery and Graffiti Gallery. As a result of its decades long effort, many smaller cultural ventures have sprouted recently.

Arts Oil City Under the City, there is a new and growing effort to make Oil City an artist relocation destination. This program offers affordable housing and studios, and proximity to regional art markets. Artists from California, Chicago, New York as well as Pennsylvania have relocated, bought property and opened businesses and studios in Oil City.