Oklahoma State University (also referred to informally as Oklahoma State, OKState, O-State, and OSU) is a land-grant, sun-grant, coeducational public research university located in Stillwater, Oklahoma, United States. OSU was founded in 1890 under the Morrill Act. Originally known as Oklahoma Agricultural and Mechanical College (Oklahoma A&M), it is the flagship institution of the Oklahoma State University System. Official enrollment for the fall 2010 semester system-wide was 35,073, with 23,459[2] students enrolled at OSU-Stillwater. Enrollment shows the Freshman class of 2012 was the largest on record with 4,298 students.[2] OSU is classified by the Carnegie Foundation as a research university with high research activity.[5]

Oklahoma State University is listed by the Princeton Review as one of 120 “Best Western Colleges” for 2011, and as one of 50 "Best Value Colleges – Public" for 2010. Oklahoma State University is one of the highest rated veterinarian colleges in the US.[6] It is ranked by U.S. News & World Report No. 66 among "Top Public Schools: National Universities" and No. 132 among all National Universities for 2011.[7] For 2009–10, Kiplinger listed OSU among its "100 Best Values in Public Education," with an in-state ranking of No. 91 and an out-of-state ranking of No. 93.[8] In 2013, Oklahoma State was ranked number 23 on the Forbes list of "Best Value Colleges."[9]

The Oklahoma State Cowboys and Cowgirls' athletic heritage includes 51 national championships, a total greater than all but three NCAA Division I schools in the United States, and first in the Big 12 Conference.[10] Students spend part of the fall semester preparing for OSU's Homecoming celebration, begun in 1913, which draws more than 40,000 alumni and over 70,000 participants each year to campus and is billed by the university as "America's Greatest Homecoming Celebration."[11] 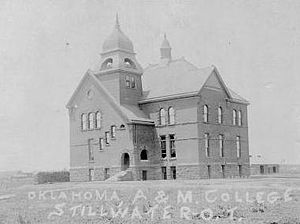 On December 25, 1890, the Oklahoma Territorial Legislature finally gained approval for Oklahoma Territorial Agricultural and Mechanical (A&M) College, the land-grant university established under the Morrill Act of 1862. It specified that the college was to be within Payne County. Such an ambiguous description created rivalry between towns within the county, with Stillwater ultimately winning out. Upon statehood in 1907, "Territorial" was dropped from its title.

The first students assembled for class on December 14, 1891. Classes were held for two and one-half years in local churches until the first academic building, later known as Old Central, was dedicated on June 15, 1894, on the southeast corner of campus, which at the time was flat plowed prairie.[12] In 1896, Oklahoma A&M held its first commencement with six male graduates. The first Library was established in Old Central in one room shared with the English Department. The first campus building to have electricity, Williams Hall, was constructed in 1900. With its turreted architecture it was referred to as the "Castle of the Prairies";[13] It remained standing until 1969. One of the earliest campus buildings was also a barn, used as part of an agricultural experiment station, which was served by a large reservoir pond created in 1895. The barn burned in 1922, but the pond, enlarged and remodeled in 1928 and 1943, is now known as Theta Pond, a popular campus scenic landmark.[14] In 1906, Morrill Hall was completed and became the principal building on campus. A fire gutted the building in 1914, but the outside structure survived intact, and the interior was reconstructed. The first dormitory for women was completed in 1911. It contained a kitchen, dining hall, some classrooms, and a women's gymnasium. It is now the Bartlett Center for the Studio Arts and houses the Gardiner Art Gallery.[15] By 1919 the campus included Morrill Hall, the Central Building, the Engineering Building (now Gundersen Hall), the Women's building, the Auditorium (replaced later by the Seretean Center for Performing Arts),[16] the Armory-Gymnasium (now the Architecture Building) and the Power Plant.[17]

At the beginning of World War II, Oklahoma A&M was one of six schools selected by the United States Navy to give the Primary School in the Electronics Training Program (ETP), also known as Naval Training School Elementary Electricity and Radio Materiel (NTS EE&RM).[18] Starting in March 1942, each month a new group of 100 Navy students arrived for three months of 14-hour days in concentrated electrical engineering study. Cordell Hall, the newest dormitory, was used for housing and meals; lectures and lab sessions were held in the Engineering Building. Professor Emory B. Phillips was the Director of Instruction. ETP admission required passing the Eddy Test, one of the most selective qualifying exams given during the war years.[19] At a given time, some 500 Navy students were on the campus, a significant fraction of the war-years enrollment. The training activity continued until June 1945, and served a total of about 7,000 students; among these was Robert B. Kamm, a future professor and president of Oklahoma State University.[20][21] During some of the war years, the Navy also had a Yeoman training activity for WAVES and SPARS on the campus. 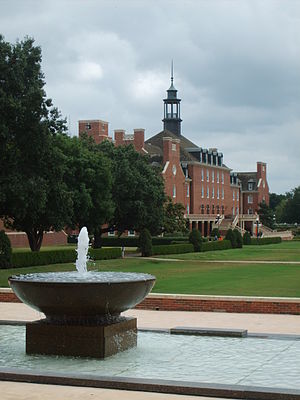 Much of the growth of Oklahoma A&M and the campus architectural integrity can be attributed to work of Henry G. Bennett, who served as the school's president from 1928 to 1950. Early in his tenure Dr. Bennett developed a strategic vision for the physical expansion of the university campus. The plan was adopted in 1937 and his vision was followed for more than fifty years, making the university what it is today, including the Georgian architecture that permeates the campus. The focal point of his vision was a centrally located library building, which became a reality when the Edmon Low Library opened in 1953. Another major addition to the campus during the Bennett years was the construction of the Student Union, which opened in 1950. Subsequent additions and renovations have made the building one of the largest student union buildings in the world at 611,000 sq ft (56,800 m2).[22] A complete renovation and further expansion of the building began in 2010. 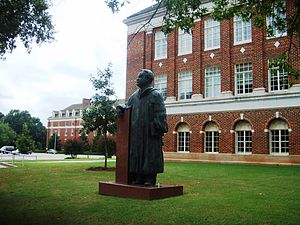 Statue of Henry G. Bennett near Library Lawn at OSU

On May 15, 1957, Oklahoma A&M changed its name for the final time to Oklahoma State University to reflect the broadening scope of curriculum offered. (Oklahoma Gov. Raymond Gary signed the bill authorizing the name change passed by the 26th Oklahoma Legislature on May 15, 1957. However, the bill only authorized the Board of Regents to change the name of the college, a measure they voted on at their meeting on June 6. The official name - Oklahoma State University of Agricultural and Applied Sciences - took effect July 1. The latter portion of the name was dropped in 1980.) Subsequently, the Oklahoma State University System was created, with the Stillwater campus as the flagship institution and several outlying branches: OSU-Institute of Technology in Okmulgee (1946), OSU-Oklahoma City (1961), OSU-Tulsa (1984), and the Center for Health Sciences also in Tulsa (1988).[23]

In 2005, OSU announced its "Campus Master Plan", a campaign to enhance academic, athletic, and administrative facilities. Over $800 million is ear-marked for campus construction and renovation over twenty years. The Plan calls for an "athletic village" where all of the university's athletic facilities will be located on the main campus. To accomplish this goal, the athletic department bought all (or nearly all) the property north of Boone Pickens Stadium up to McElroy between Knoblock and Washington streets. This drew criticism from the city of Stillwater and property owners.[24] While the vast majority of the real estate was rental property targeting college students, a few owners were longtime residents. There was a lone holdout in this parcel of land, who sued OSU over their right to use eminent domain.[25] The case was decided in favor of the University. The project includes the construction of an indoor practice facility for most sports, a soccer stadium/outdoor track, a tennis complex, and a baseball stadium. 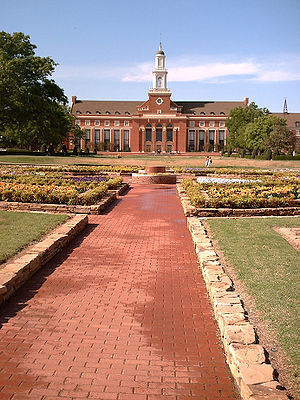 In 2006, OSU became the recipient of a gift of $165 million from alumnus T. Boone Pickens to the university's athletic department, and in 2008 received another gift from Pickens of $100 million for endowed academic chairs. It was the largest gift for academics ever given in the state.[26] Ethical concerns have been raised in media reports about the propriety of how some of the Pickens gifts have been made, immediately returned to Pickens, and then placed in hedge funds owned by Pickens' companies[27] In February, 2010, Pickens announced that he was pledging another $100 million to fund a scholarship endowment as part of a $1 billion fund-raising campaign titled "Branding Success." The pledge brought the total pledged or contributed to OSU by Pickens to over $500 million.[28]

On October 24, 2015 during the annual homecoming parade, Adacia Chambers drove her vehicle into a crowd of people killing 4 people and injuring 47.[29]

OSU provides further opportunities for select students to study, conduct research, and exchange ideas in a more challenging and supportive academic environment through the Honors College.

The graduate degree programs of all colleges are administered through the Graduate College. 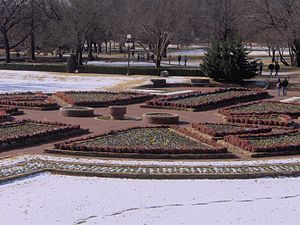 Oklahoma State University provides information about the university that is easily accessible on its Ledger website,[48] which provides a thorough look at OSU, its colleges and its departments, helping prospective students and their parents make informed decisions about their college choice. The ledger is divided into three sections:

Academic Ledgers contain a five-year history of student, faculty, research, and financial information, as well as tuition/mandatory fee rates. The academic ledgers are available for the entire university, as well as broken down by academic college, and within each college by department.

Diversity Ledger is a five-year history that provides a more detailed breakdown of the student, faculty and staff of Oklahoma State University.

Current university-owned housing options include 26 residence halls, more than 15 dining options, and seven family-first apartment complexes. In recent years, on-campus housing has been undergoing significant transformation. Student living was previously dominated by traditional residence halls; however, apartment-style buildings now comprise approximately half of the living quarters. In 2005, the high-rise Willham North and South residence halls that once dominated the Stillwater skyline were demolished and replaced with the Village suites on its site. Iba Hall, another traditional hall, was closed in 2007, but was reopened in 2011 due to an increase of incoming freshman.

Oklahoma State University's fraternities and sororities celebrated 100 years of existence at OSU in 2008.

Organizations are available to students through the university that serve any interest. A complete list of campus organizations can be found here.[49] 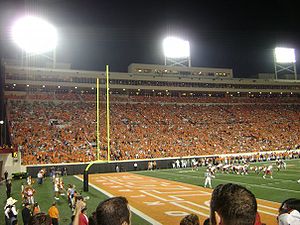 Men's basketball is tradition rich at Oklahoma State. Oklahoma State made the Final Four in 1995 and 2004 and was the first ever Division 1 basketball program to win back-to-back National Championships in 1945-1946.

The Cowboy wrestling team brought home their 33rd NCAA championship in spring 2005, scoring the most points ever by an Oklahoma State wrestling team in the NCAA. OSU won their 34th overall (and 4th consecutive) title in 2006.[50] OSU's 34 team titles are the most ever collected by a school in one sport. The Cowboys have also produced 127 individual national champions, including the sport's first-ever four-time champion, Pat Smith.

Since the 1924 Olympics, 55 Oklahoma State University Olympians have won a total of 24 medals: 21 gold, two silver, and one bronze.

Notable among a number of songs commonly played and sung at various events such as commencement, convocation, and athletic games are: The Waving Song, Ride 'Em Cowboys (the Oklahoma State University fight song), and the OSU Chant.

Created in 1975 by Head Cheerleader, Sandy Jesseph Faires and documented in the book,"The History of Oklahoma State University Athletics".

At the end of every sporting event, win or lose, OSU student-athletes face the student section and sing the alma mater along with other students, faculty, alumni and staff.

Interviews with OSU Alumni can be viewed and heard through the O-State Stories Project of the Oklahoma Oral History Research Program.[53]

Listed below is just a few of the buildings at OSU. For a complete list, visit List of Oklahoma State University buildings. 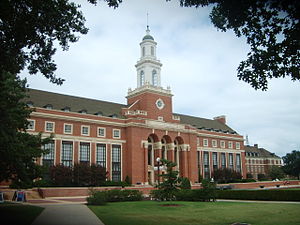 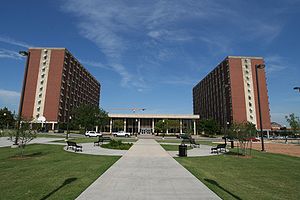 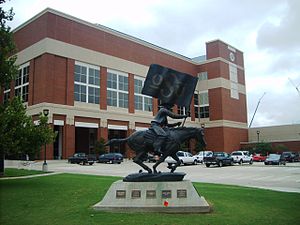