Old Delhi is a walled city of Delhi, India, was founded as Shahjahanabad (Persian: شاه جهان آباد‎‎) by Mughal Emperor Shahjahan in 1639.[1] It remained the capital of the Mughals until the end of the Mughal dynasty.[2][3] It was once filled with mansions of nobles and members of the royal court, along with elegant mosques and gardens. Today, despite having become extremely crowded and dilapidated, it still serves as the symbolic heart of metropolitan Delhi. 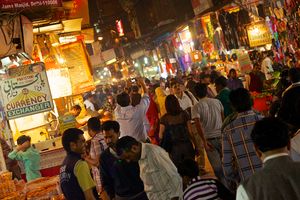 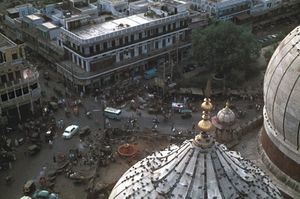 View of Old Delhi from Jama Masjid in June 1973.

Delhi remained an important place for the Mughals, who built palaces and forts . Most importantly, it was Shah Jahan, who had the walled city built from 1638 to 1649, containing the Lal Qila and the Chandni Chowk. Daryaganj had the original cantonment of Delhi, after 1803, where a native regiment of Delhi garrison was stationed, which was later shifted to Ridge area. East of Daryaganj was Raj ghat Gate of the walled city, opening at Raj Ghat on Yamuna River.[4] First wholesale market of Old Delhi opened as the hardware market in Chawri Bazaar in 1840, the next wholesale market was that of dry fruits, spices and herbs at Khari Baoli, opening in 1850. The Phool Mandi (Flower Market) of Daryaganj was established in 1869, and even today, despite serving a small geographical area, it is of great importance due to dense population.[5]

After the fall of the Mughal Empire post 1857 revolt, the British Raj shifted the capital of British controlled territories in India to a less volatile city, Calcutta, where it remained until 1911. After the announcement of the change, the British developed Lutyens' Delhi (in modern New Delhi) just south-west of Shahjahanabad. At this point, the older city started being called Old Delhi, as New Delhi became the seat of national government. It was formally inaugurated as such in 1931. Until the 1930s, few people ventured outside the walled city; thus in the following years, as the walled city got more and more congested, other areas around it were developed.[6] 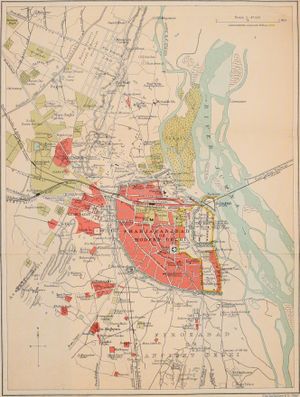 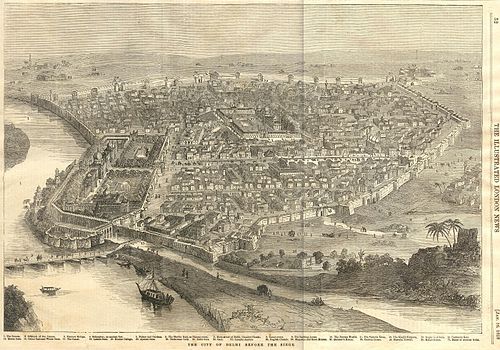 The City of Delhi Before the Siege - The Illustrated London News Jan 16, 1858 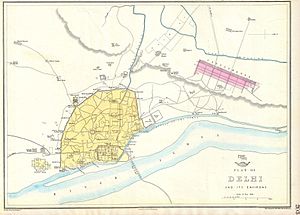 It is approximately shaped like a quarter cìrcle, with the Red Fort as the focal point. The old city was surrounded by a wall enclosing about 1,500 acres (6.1 km2), with 14 gates:[7]

The surrounding walls, 12 feet (3.7 m) wide and 26 feet (7.9 m) tall, originally of mud, were replaced by red stone in 1657. In the Mughal period, the gates were kept locked at night. The walls have now largely disappeared,[10] but most of the gates are still present. The township of old Delhi is still identifiable in a satellite image because of the density of houses.

The famous Khooni Darwaza, south of Delhi Gate and just outside the walled city, was originally constructed by Sher Shah Suri. 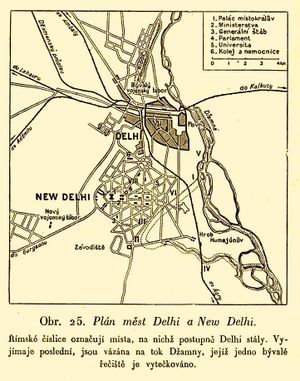 Map of Delhi and New Delhi after the First World War. The descriptions are in Czech.

The main street, now termed Chandni Chowk, runs from the Red Fort to Fatehpuri Masjid. Originally a canal ran through the middle of the street.

North of the street, there is the mansion of Begum Samru, now called Bhagirath Palace. South is the street is Dariba Kalan, a dense residential area, beyond which is Jama Masjid. Daryaganj is a section that used to border the river at Rajghat and Zeenat-ul-Masajid.

The Urdu language emerged from the Urdu Bazaar section of Old Delhi. The Din Dunia magazine and various other Urdu publications are the reason of this language staying alive.[11]

Its main arteries are

Old Delhi is approximately bounded by these modern roads: 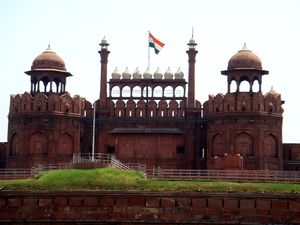 The Lahori Gate of Red Fort from Chandni Chowk.

The section between the Lahore Gate of the fort and the entrance of the street called the Dariba, known as the Khuni Darwazah, was called the Urdu or the Military Bazaar; owing, very probably, to the circumstances of a portion of the local garrison having been once quartered about the place. Between the Khuni Darwazah and the present Kotwali, or the Head Police Station of the city, the street has the name of Phul ka Mandi or the flower market. The houses in front of the Kotwali were built at a short distance from the line of the rest of the houses in the street, so as to form a square.

Between the Kotwali and the gate known as the Taraiah, was the Jauhari or the Jewellers' Bazaar; between the Taraiah and the neighbourhood known as Asharfi ka Katra, was, par excellence, the Chandni Chauk. There was a tank in the centre of the Chauk the site of which is now occupied by the Municipal Clock Tower, and beyond this to the Fatehpuri Masjid was the Fatehpuri Bazaar. The houses round Chandni Chauk were of the same height, and were ornamented with arched doors and painted verandahs. To the north and south of the square there were two gate-ways, the former leading to the Sarai of Jehan Ara Begum, and the latter to one of the most thickly populated quarters of the city. Round the tank the ground was literally covered with vegetable, fruit, and sweetmeat stalls. In the course of time the whole of this long street came to be known as the Chandni Chauk.

This grand street was laid out by Jahanara Begam, daughter of Shah Jahan. From the Lahore Gate of the fort to the end of the Chandni Chauk the street was about 40 yards wide and 1,520 yards long. Through the centre of this street ran the canal of 'Ali Mardan, shaded on both sides by trees. On the eastern end of the Chandni Chauk stands the Lahore Gate of the Fort, and on the opposite end the handsome mosque of Fatehpuri Begam).

The clock tower no longer exists, although the locationn is still called Ghantaghar. The Sarai of Jehan Ara Begum has been replaced by the city hall. The kotwali is now adjacent to Gurdwara Sis Ganj Sahib. 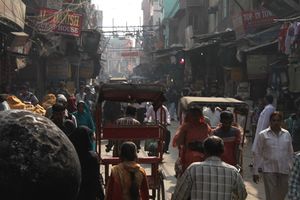 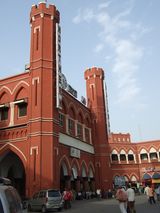 Many of the historical attractions are in the Chandni Chowk area and the Red Fort. In addition, Old Delhi also has:[13]

Some of the historical mansions include:[15][16]

Old Delhi is well known for its cuisine. There area in and around Jama Masjid and Lal Kuan are predominantly Muslim. Hence the cuisine here is more meat dominant Mughlai cuisine. The area in and around Chandni Chowk is predominantly Jain and Baniya communities. Hence the food is strictly vegetarian and in a lot of cases made without onion and garlic. The famous Gali Paranthe Wali and Ghantewala halwai are also situated here.