The Old National Pronunciation (simplified Chinese: 老国音; traditional Chinese: 老國音; pinyin: lǎo guóyīn) was the system established for the phonology of standard Chinese as decided by the Commission on the Unification of Pronunciation from 1913 onwards, and published in the 1919 edition of the Dictionary of National Pronunciation. Although it was mainly based on the phonology of the Beijing dialect, it was also influenced by historical forms of northern Mandarin as well as other varieties of Mandarin and even some varieties of Wu Chinese. The artificial nature of the system caused some debate among intellectuals after its publication, and in 1926 a decision was made to normalize the pronunciations to the natural pronunciations found in Beijing, which resulted in a revised Vocabulary of National Pronunciation for Everyday Use published in 1932.[1]

There are three features of the Old National Pronunciation that would distinguish it from the Beijing dialect:

First the zhuyin fuhao is given, followed by the IPA symbol, then the modern pinyin equivalent where applicable.

There are five tones in the Old National Pronunciation, which are classified thus according to their descent from the four tones of Middle Chinese: dark level (陰平), light level (陽平), rising (上), departing (去), entering (入). Though there are exceptions, these correspond to the four tones as found in Middle Chinese rime tables, dependent on the nature of the initial:

The actual phonetic values of these tones were not prescribed in the 1919 edition of the Dictionary of National Pronunciation. Although various proposals of merging values from different areas of China were raised, the de facto standard was to use the tonal system of Beijing, and to simply read the entering tone (which the Beijing dialect lacked as a distinctive tone) as a shortened departing tone, falling in nature, as shown from sets of gramophone recordings of Wang Pu, a member of the Commission, and of noted linguist Yuen Ren Chao.[2]

The notation utilized to indicate the prescribed pronunciation was zhuyin fuhao, as adopted by the Commission on the Unification of Pronunciation. The tone system used at the time was different to the modern version, however: the dark level tone was unmarked, and the light level, rising, departing and entering tone each had a single dot marked at the bottom left, top left, top right and bottom right corners respectively. 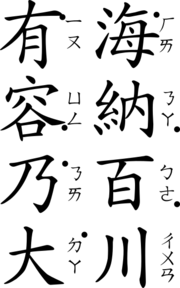