The Ole Miss riot of 1962, or Battle of Oxford, was fought between Southern segregationist civilians and federal and state forces beginning the night of September 30, 1962; segregationists were protesting the enrollment of James Meredith, a black US military veteran, at the University of Mississippi (known affectionately as Ole Miss) at Oxford, Mississippi. Two civilians were killed during the night, including a French journalist, and over 300 people were injured,[1] including one third of the US Marshals deployed.

In 1954 the US Supreme Court had ruled in Brown v. Board of Education that segregation in public schools was unconstitutional. Meredith applied as a legitimate student with strong experience as an Air Force veteran and good grades in completed coursework at Jackson State University. Despite this, his entrance was barred first by university officials, and later by segregationist Governor Ross Barnett.

In late September, 1962, the administration of President John F. Kennedy had extensive discussions with Governor Barnett and his staff about protecting Meredith, but Barnett publicly vowed to keep the university segregated. The President and Attorney General Robert F. Kennedy wanted to avoid bringing in federal forces for several reasons. Robert Kennedy hoped that legal means, along with the escort of U.S. Marshals, would be enough to force the Governor to comply.[2] He also was very concerned there might be a "mini-civil war" between the U.S. Army troops and armed protesters.[2]

Governor Barnett, under pressure from the courts, conducted secret back door discussions in response to calls from the Kennedy administration between Thursday September 27 and Sunday the 30th.[3] He was committed to maintain civil order and reluctantly agreed to allow Meredith to register in exchange for a scripted face-saving event. Attorney General Robert F. Kennedy ordered 500 U.S. Marshals to accompany Meredith during his arrival and registration.

In accordance with Barnett and Kennedy's plan, on Sunday evening, September 30, the day before the anticipated showdown, Meredith was flown to Oxford. He was quietly escorted by Mississippi Highway Patrol as he moved into a dorm room. The federal marshals assembled on to campus, supported by the 70th Army Engineer Combat Battalion from Ft Campbell, Kentucky. Responding to the federal presence, a crowd of a thousand, mostly students quickly crowded onto campus. As the scene grew more out of control, at first the highway patrol helped hold off the crowds, but, despite Barnett's renewed commitment, they were withdrawn by State Senator George Yarbrough starting at about 7:25 pm local time.[4][5] The students, increasingly joined by other agitators, started to break out into a full riot on the Oxford campus.

The crowd eventually swelled to about three thousand. As its behavior turned increasingly violent, including the death of a journalist, the marshals ran out of tear gas defending the officials in the Lyceum. President Kennedy reluctantly decided to call in reinforcements in the middle of the night under the command of Brigadier General Charles Billingslea. He ordered in U.S. Army military police from the 503rd and 716th Military Police Battalions, which had previously been readied for deployment under cover of the nuclear war Exercise Spade Fork, plus the U.S. Border Patrol and the federalized Mississippi National Guard. U.S. Navy medical personnel (physicians and hospital corpsmen) attached to the U.S. Naval Hospital in Millington, Tennessee, were also sent to the university.

Before they arrived, rioters roaming the campus discovered Meredith was in Baxter Hall and started to assault it. Early in the morning, as Gen. Billingslea's party entered the university gate, a white mob attacked his staff car and set it on fire. Billingslea, the Deputy Commanding General John Corley, and aide, Capt Harold Lyon, were trapped inside the burning car, but they forced the door open, then crawled 200 yards under gunfire from the mob to the University Lyceum Building. The army did not return this fire. To keep control, Gen Billingslea had established a series of escalating secret code words for issuing ammunition down to the platoons, a second one for issuing it to squads, and a third one for loading, none of which could take place without the General confirming the secret codes.

By the end, one third of the US Marshals, a total of 166 men, were injured in the melee, and 40 soldiers and National Guardsmen were wounded.[6] 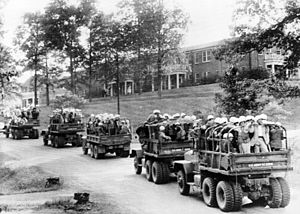 US Army trucks loaded with steel-helmeted US Marshals roll across the University of Mississippi campus on October 3, 1962.

Two men were murdered during the first night of the riots: French journalist Paul Guihard,[7] on assignment for the London Daily Sketch, who was found behind the Lyceum building with a gunshot wound to the back; and 23-year-old Ray Gunter, a white jukebox repairman who had visited the campus out of curiosity. Gunter was found with a bullet wound in his forehead. Law enforcement officials described these as execution-style killings.[8]

Finally, on October 1, 1962, Meredith became the first African-American student to be enrolled at the University of Mississippi,[9] and attended his first class, in American History.[1] Meredith graduated from the university on August 18, 1963 with a degree in political science.[10] At that time, there were still hundreds of troops guarding him 24 hours a day.[11]

Governor Barnett was fined $10,000 and sentenced to jail for contempt. The charges were later dismissed by the 5th Circuit Court of Appeals.

Sports journalist Wright Thompson wrote an article "Ghosts of Mississippi" (2010),[12] that described the riot and the football team's season that year. It was adapted as a documentary film for the ESPN 30 for 30 series, entitled The Ghosts of Ole Miss (2012), about the 1962 football team's perfect season and the early violence in the fall over integration of the historic university.[13]

The event is regarded as a pivotal moment in the history of civil rights in the United States. Bob Dylan wrote and sang about the events in his song "Oxford Town". Charles W. Eagle described Meredith's achievement by the following:

"In a major victory against white supremacy, he had inflicted a devastating blow to white massive resistance to the civil rights movement and had goaded the national government into using its overpowering force in support of the black freedom struggle."[14]