Olivier Levasseur (1688 or 1690 – 7 July 1730), was a pirate, nicknamed La Buse (The Buzzard) or La Bouche (The Mouth) in his early days, called thus because of the speed and ruthlessness with which he always attacked his enemies. He is also known for allegedly hiding one of the biggest treasures in pirate history, estimated at over £1 billion, and leaving a cryptogram behind with its whereabouts.

Born at Calais during the Nine Years' War (1688–97) to a wealthy bourgeois family, he became a naval officer after receiving an excellent education. During the War of the Spanish Succession (1701–1714), he procured a Letter of Marque from king Louis XIV and became a privateer for the French crown. When the war ended he was ordered to return home with his ship, but instead joined the Benjamin Hornigold pirate company in 1716. Levasseur proved himself a good leader and shipmate, although he already had a scar across one eye limiting his sight.

After a year of successful looting, the Hornigold party split, with Levasseur deciding to try his luck on the West African coast. In 1719 he operated together with Howell Davis and Thomas Cocklyn for a time. In 1720, they attacked the slaver port of Ouidah, which was part of the Kingdom of Whydah at the time and is on the coast of what is now Benin, reducing the local fortress to ruins. Later that year, he was shipwrecked in the Mozambique Channel and stranded on the island of Anjouan, one of the Comores. His bad eye had become completely blind by now so he started wearing an eyepatch.

From 1720 onwards he launched his raids from a base on the island of Sainte-Marie, just off the Madagascar coast, together with pirates John Taylor and Edward England, (no doubt planning to capture one of the Great Mughal's heavily armed but usually heavily laden pilgrim ships to Mecca). They first plundered the Laccadives, and sold the loot to Dutch traders for £75,000. Levasseur and Taylor eventually got tired of England's humanity and marooned him on the island of Mauritius.

They then perpetrated one of piracy's greatest exploits: the capture of the Portuguese great galleon Nossa Senhora do Cabo (Our Lady of the Cape) or Virgem Do Cabo (The Virgin of the Cape), loaded full of treasures belonging to the Bishop of Goa, also called the Patriarch of the East Indies, and the Viceroy of Portugal, who were both on board returning home to Lisbon. The pirates were able to board the vessel without firing a single broadside because the Cabo had been damaged in a storm and to avoid capsizing the crew had dumped all of its 72 cannon overboard, then anchored off Réunion island to undergo repairs. (This incident would later be used by Robert Louis Stevenson in his novel "Treasure Island" where the galleon is referred to as The Viceroy of the Indies in the account given by his famed fictional character Long John Silver).

The booty consisted of bars of gold and silver, dozens of boxes full of golden Guineas, diamonds, pearls, silk, art and religious objects from the Se Cathedral in Goa, including the Flaming Cross of Goa made of pure gold, inlaid with diamonds, rubies and emeralds. It was so heavy, that it required 3 men to carry it over to Levasseur's ship. In fact, the treasure was so huge that the pirates did not bother to rob the people on board, something they normally would have done.

When the loot was divided, each pirate received at least £50,000 golden Guineas, as well as 42 diamonds each. Levasseur and Taylor split the remaining gold, silver, and other objects, with Levasseur taking the golden cross.

In 1724, Levasseur sent a negotiator to the governor on the island of Bourbon (today Réunion), to discuss an amnesty that had been offered to all pirates in the Indian Ocean who would give up their practice. However, the French government wanted a large part of the stolen loot back, so Levasseur decided to avoid the amnesty and settled down in secret on the Seychelles archipelago. Eventually he was captured near Fort Dauphin, Madagascar. He was then taken to Saint-Denis, Réunion and hanged for piracy at 5 p.m. on 7 July 1730. 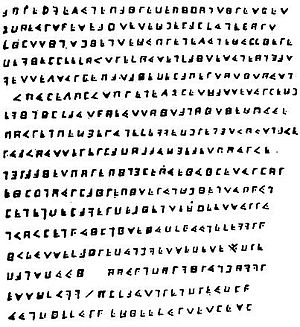 The Cryptogram of Olivier Levasseur 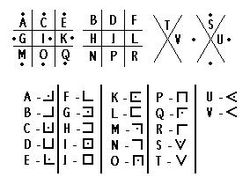 Legend tells that when he stood on the scaffold he had a necklace around his neck, containing a cryptogram of 17 lines, and threw this in the crowd while exclaiming: "Find my treasure, the one who may understand it!" What became of this necklace is unknown to this day. Many treasure hunters have since tried to decode the cryptogram hoping its solution will lead to this treasure.

In 1923 the widow of a certain Charles Savy named Rose found some carvings in the rocks at Bel Ombre beach near Beau Vallon on the island of Mahé, due to the low water level that year. She found carvings of a dog, snake, turtle, horse, fly, two joined hearts, a keyhole, a staring eye, a ballot box, a figure of a young woman's body, and the head of a man. A public notary in Victoria heard of this news, and understood those symbols must have been made by pirates. He searched in his archives, and found two possible connections. The first was a map of the Bel Ombre beach, published in Lissabon in 1735.[dubious – discuss] It stated: "owner of the land... la Buse" (Levasseur).[dubious – discuss]

The second discovery was the last will from the pirate[citation needed] Bernardin Nageon de L'Estang, nicknamed le Butin , who died 70[1] years after Levasseur, and claimed to have obtained possession of some of Levasseur's treasure.[citation needed] It contained 3 cryptograms and 2 letters, one to his nephew:

"I've lost a lot of documents during shipwreck.. I've already collected several treasures; but there are still four left. You will find them with the key to the combinations and the other papers."[citation needed]

and one to his brother:

"[..] Our captain got injured. He made sure I was a Freemason and then entrusted me with his papers and secrets before he died. Promise your oldest son will look for the treasure and fulfill my dream of rebuilding our house. [..] The commander will hand over the documents, there are three."[citation needed]

The notary contacted Mrs. Savy, and after some excavations at the 'staring eye' they discovered two coffins containing the remains of two people,[dubious – discuss] identified as pirates by the gold rings in their left ears, as well as a third body without a coffin, but no treasure was found at this location.

In 1947 Englishman Reginald Cruise-Wilkins, a neighbour of Mrs. Savy, studied the documents, but the cryptogram was much more difficult to solve than first believed. Deciphering it could be carried out only by starting from the two letters[why?] and the three cryptograms compiled in mysterious alphabet, a rebus, or at least in initiatory writing which could be put in relation to masonic symbolism. Cruise-Wilkins then discovered a connection with the Zodiac, the Clavicles of Solomon, and the Twelve Labours of Hercules. Various tasks, representing the Labours of Hercules, had to be undertaken in strict order. The treasure chamber is somewhere underground and must be approached carefully, to avoid being flooded. It is protected by the tides, which requires damming to hold them back, and is to be approached from the north.

Until his death at Réunion, Cruise-Wilkins sought and dug in the island of Mahé. In a cave, except for old guns, some coins, and pirate sarcophagi, he did not find anything. He died on 3 May 1977 before he broke the last piece of code. His son, Seychellois history teacher John is currently still seeking the treasure, concluding that after using state-of-the-art equipment, he needs "to go back to the old method, [getting] into this guy's mind, [claiming he is] ten down, two to go in his Herculean Labours [2]".