From Infogalactic: the planetary knowledge core
Jump to: navigation, search
This article is about the sport of weightlifting. For the muscle-building activity involving heavy weights, see weight training. For using weights to develop physique, see bodybuilding. 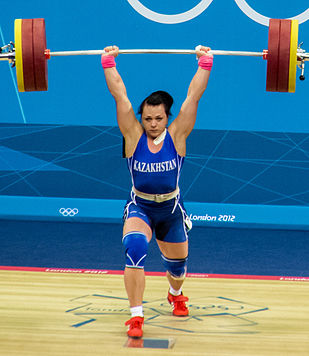 Olympic lifter Svetlana Podobedova at the 2012 Olympic Games in London.

Weightlifting, also called Olympic-style weightlifting, or Olympic weightlifting, is an athletic discipline in the modern Olympic programme in which the athlete attempts a maximum-weight single lift of a barbell loaded with weight plates.

The two competition lifts in order are the snatch and the clean and jerk. Each weightlifter receives three attempts in each, and the combined total of the highest two successful lifts determines the overall result within a bodyweight category. Bodyweight categories are different for women and men. A lifter who fails to complete at least one successful snatch and one successful clean and jerk also fails to total, and therefore receives an "incomplete" entry for the competition. The clean and press was once a competition lift, but was discontinued due to difficulties in judging proper form.

In comparison with other strength sports, which test limit strength (with or without lifting aids), Weightlifting tests aspects of human ballistic limits (explosive strength); the lifts are therefore executed faster—and with more mobility and a greater range of motion during their execution—than other strength movements. Properly executed, the snatch and the clean and jerk are both dynamic and explosive while appearing graceful, especially when viewed from a recording at a slowed speed.

While there are relatively few competitive Olympic weightlifters, the lifts performed in the sport of weightlifting, and in particular their component lifts (e.g. squats, deadlifts, cleans), are commonly used by elite athletes in other sports to train for both explosive and functional strength.

The sport is controlled by the International Weightlifting Federation (IWF). Based in Budapest, it was founded in 1905.

Athletes compete in a division determined by their body mass. There are eight male divisions and seven female divisions since 1998. 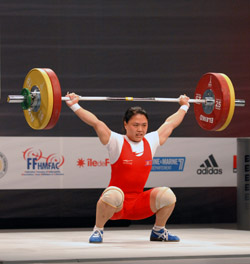 In each weight division, lifters compete in both the snatch and clean and jerk. Prizes are usually given for the heaviest weights lifted in each and in the overall—the maximum lifts of both combined. The order of the competition is up to the lifters—the competitor who chooses to attempt the lowest weight goes first. If they are unsuccessful at that weight, they have the option of reattempting at that weight or trying a heavier weight after any other competitors have made attempts at the previous weight or any other intermediate weights. The barbell is loaded incrementally and progresses to a heavier weight throughout the course of competition. Weights are set in 1 kilogram increments. When a tie occurs, the athlete with the lower bodyweight is declared the winner. If two athletes lift the same total weight and have the same bodyweight, the winner is the athlete who lifted the total weight first.[1]

During competition, the snatch event takes place first, followed by a short intermission, and then the clean and jerk event. There are two side judges and one head referee who together provide a "successful" or "failed" result for each attempt based on their observation of the lift within the governing body's rules and regulations. Two successes are required for any attempt to pass. Usually, the judges' and referee's results are registered via a lighting system with a white light indicating a "successful" lift and a red light indicating a "failed" lift. This is done for the benefit of all in attendance be they athlete, coach, administrator or audience. In addition, one or two technical officials may be present to advise during a ruling.

At local competitions, a "Best Lifter" title is commonly awarded. It is awarded to both the best men's and women's lifters. The award is based on a formula which employs the "Sinclair Coefficient", a coefficient derived and approved by the sport's world governing body and which allows for differences in both gender and bodyweight. When the formula is applied to each lifter's overall total and then grouped along with the other competitors' and evaluated, it provides a numeric result which determines the competition's best overall men's and women's lifters.[2] And while, usually, the winner of the heaviest weight class will have lifted the most overall weight during the course of a competition, a lifter in a lighter weight class may still have lifted more weight both relative to his or her own bodyweight, and to the Sinclair coefficient formula, thereby garnering the "Best Lifter" award.

Competition to establish who can lift the heaviest weight has been recorded throughout civilization, with the earliest known recordings including those found in Egypt, China and ancient Greece. Today, the modern sport of weightlifting traces its origins to the European competitions of the 19th century.

The first male world champion was crowned in 1891. Women's competition did not exist, and the weightlifters were not categorized by height or weight.

The first Olympic Games of 1896 included weightlifting in the Field event of the predecessor to today's Track and Field or Athletics event. During the 1900 Olympic Games, there was no weightlifting event. Weightlifting resumed as an event, again in Athletics, in 1904 but was omitted from the Games of 1908 and 1912. These were the last Games until after the First World War. In these early Games, a distinction was drawn between lifting with 'one hand' only and lifting with 'two hands'. The winner of the 'one hand' competition in 1896 was Launceston Elliot, while the winner of the 'two hands' event was Viggo Jensen of Denmark.[3]

In the Olympic Games after 1920, instead of requiring all competitors to compete against each other regardless of size, weight classes were introduced and, by the 1932 Olympic Games, weightlifting was divided into five weight divisions. 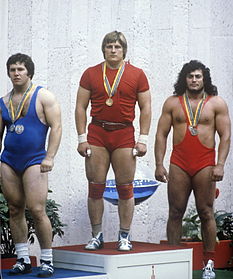 The 110kg division weightlifting winners of the 1980 Olympic Games, held in Moscow.

In 1928, the sport dropped the 'one hand' exercises altogether leaving only the three remaining exercises: the clean and press, the snatch and the clean and jerk.

By 1972, the clean and press was discontinued because athletes started to push with legs and bend backwards instead of strictly pressing the weight overhead, and this left the sole elements of what is today's modern Olympic weightlifting programme – the snatch and the clean and jerk. The snatch consists of lifting the barbell from the floor to an overhead position in one fluid motion. It is a very precise lift that can be nullified by a lack of balance of the athlete. The clean and jerk consists of moving the barbell from the floor to overhead in 2 movements: from the floor to the shoulders, and from the shoulders to overhead.

As early as 1987, there were official world championships awarded to women weightlifters such as Karyn Marshall and Judy Glenney.[4][5][6] However, it was not until the 2000 Olympic Games in Sydney, Australia that an official Olympic competition for women was introduced.[7]

In 2011 the International Weightlifting Federation ruled that athletes could wear a full-body "unitard" under the customary weightlifting uniform.[8] Kulsoom Abdullah became the first woman to do so at the U.S. National Championships that year, and athletes are allowed to do so at the Olympics.[8] IWF rules previously stated that an athlete's knees and elbows must be visible so officials can determine if a lift is correctly executed.[8] 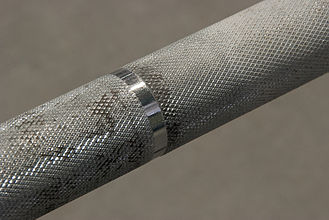 Knurling on an Olympic barbell.

Olympic weightlifting uses a steel bar (also known as a barbell) with larger-diameter rotating sleeves on either end, holding rubber-coated discs of different weights. This sleeve rotation is important for the Olympic lifts, particularly the snatch and clean movements, because it drastically reduces the rotational inertia of the plates. Without sleeve rotation, the Olympic lifter faces more challenging lifts and a greater risk of injury.[9]

A men's Olympic barbell weighs 20 kg (44 lbs) with a shaft diameter of 28mm and a length of 2200mm, whereas a women's Olympic barbell weighs 15 kg (33 lbs) and has a shaft diameter of 25mm with a length of 2010mm.[10][11] The distance between the sleeves, however, is the same for the men's and the women's bars at 1310mm. The grip texture of the bar is called the knurling, and is distributed differently between the men's and women's bars: the men's has knurling in the centre but the women's does not. The Olympic barbells used in competition are certified by the IWF.[9]

The weight plates, typically referred to as "bumper plates" because of their rubber design, weigh between 0.5 kg and 25 kg. The bumper plates are constructed out of rubber to allow the weights to be dropped from various heights—either after a successful lift or during an unsuccessful one. Olympic bumper plates conform to international standards for colouring. That is, 10 kg is green, 15 kg is yellow, 20 kg is blue, and 25 kg is red.[9]

In addition to the rubber bumpers, smaller competition iron plates can be used to add weight in small increments to the bar. The colour designations for these iron plates are as follows: 1 kg is green, 1.5 kg is yellow, 2 kg is blue, 2.5 kg is red, 5 kg and 0.5 kg are white. It is useful to note the colour assignment of these iron plates is consistent with the heavier bumper plates (i.e. 1 kg and 10 kg are green, 1.5 kg and 15 kg are yellow, etc.).[9] 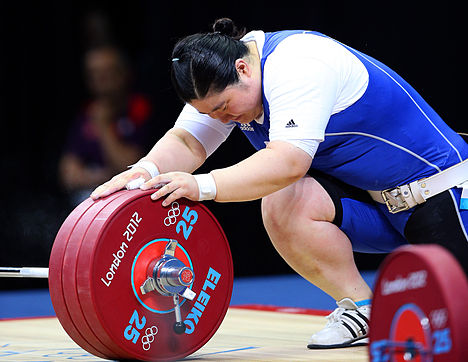 An Olympic lifter, Jang Mi-ran, holding a barbel loaded with red 25kg bumper plates, held in place with a collar. Note the lifter's taped wrists and thumbs, her weightlifting shoes, and her weightlifting belt.

Weight plates are secured to the bar using collars on each sleeve that weigh exactly 2.5 kg each.

Lifters typically wear a one-piece, close-fitting leotard often called a singlet. The wearing of a T-shirt underneath the singlet is optional.

A weightlifting belt of 120mm maximum width may also be worn to provide lower back support.[12]

Chalk is regularly used by Olympic lifters, generally prior to each attempt at a lift. Lifters rub their hands with the chalk to promote dryness and prevent the bar moving in their hands. In addition to the hands, chalk can be applied to the neck, usually above the collarbone, which is a key point of contact for the bar during a clean and jerk.[9]

Olympic lifters frequently use tape to cover the areas of their bodies exposed to friction while completing Olympic lifts. Tape is most commonly found on the Olympic lifter's thumb. A taped thumb not only lessens the risk of calluses, it reduces the pain associated with the hook grip.

Olympic lifters also tape their wrists, preventing exaggerated and uncomfortable joint movement during lifts. For particularly heavy overhead lifts, a taped wrist enables the lifter to regulate wrist extension and delimit the translation of the radius and ulna distal heads. However, while taped wrists can prevent wrist and forearm injuries in the short-term, excessive use can lead to weakened connective tissue in the area, increasing the risk of pain and injury.[9]

Perhaps the type of shoes worn by Olympic weightlifters is their most distinctive piece of equipment. Weightlifting shoes are typically designed with a raised heel of 0.5" to 1.5" and one or two metatarsal straps that tighten across the instep of the shoe. The raised heel helps the lifter maintain an upright torso while catching the bar and also allows for a deeper squat under the bar. The soles of the shoes are also quite rigid, helping to resist compression while under heavy loads. The shoes are designed for maximum stability while remaining flexible in the "toebox". This allows the lifter to come up on the toes and to catch the weight on the ball of the back foot during the "jerk" movement of the lift.[9]