An omnivore /ˈɒmnivɔər/ is an animal whose species normally derives its energy and nutrients from a diet consisting of a variety of food sources that may include plants, animals, algae, fungi and bacteria.[1]

The term means 'all-eater' (Latin, omnes, omnia, meaning "all" or "everything" and vorare meaning "to devour"),

Omnivores are often opportunistic, general feeders that lack carnivore or herbivore specializations for acquiring or processing food, but which nevertheless consume both animals and plants.[2]

The word omnivore is a term of convenience, and its significance varies according to the context of the type and degree of omnivory.[citation needed]. Omnivore is derived from the Latin omnis (all), and vora, from vorare, (to eat or devour). Traditionally the definition for omnivory relies on a species "including both animal and vegetable tissue in the diet".[3] The taxonomic utility of this definition is limited, since the diet, behavior, and phylogeny of one omnivorous species might be very different from that of another: for instance, an omnivorous pig digging for roots and scavenging for fruit and carrion is taxonomically and ecologically quite distinct from an omnivorous chameleon that eats leaves and insects. The term "omnivory" is also not comprehensive because it does not deal with mineral foods such as salt licks.

Though Carnivora is a taxon for species classification, no such equivalent exists for omnivores, as omnivores are widespread across multiple taxonomic clades. The Carnivora order does not include all carnivorous species, and not all species within the Carnivora taxon are carnivorous:[4] the eating of flesh is phylogenetically widespread.

Many species are difficult to classify as either omnivores, herbivores, or carnivores because few animals are strictly limited to just one type of tissue in the diet.[citation needed] Even the cat and weasel families, usually regarded as obligate carnivores, eat a little vegetable matter, for instance when they eat the guts of prey, although this does not prove that they derive nutrition from it. Only certain species like parasitoidal insects and insects that are specialist sap-suckers can be easily classified based on their nutrient source.[5] Another problem with classifying species as omnivore, herbivore, or carnivore concerns changes in eating habits through an animal's life cycle. Certain species, such as some grazing waterfowls like geese, are known to eat mainly animal tissue at one stage of their lives, and plant matter at another.[6] The same is true for many insects, such as beetles in the family Meloidae,[7] which begin by eating animal tissue as larvae, but change to plant matter after they mature. Likewise, many mosquito species begin with plants or assorted detritus. As they mature, however, the males continue to eat plant matter and nectar, but the females (such as those of Anopheles, Aedes and Culex), in addition to nectar, also eat blood in order to reproduce effectively.

Although cases exist of carnivores eating plant matter and herbivores eating meat, the classification "omnivore" refers to the adaptations and main food source of the species in general, so these exceptions do not make either individual animals or the species as a whole omnivorous. For the concept of "omnivore" to be regarded as a scientific classification, some clear set of measurable and relevant criteria would need to be considered to differentiate between an "omnivore" and other categories, e.g. faunivore, folivore, and scavenger.[8] Some researchers argue that evolution of any species from herbivory to carnivory or carnivory to herbivory would be rare except via an intermediate stage of omnivory.[9]

Various mammals are omnivorous in the wild, such as species of pigs,[10] badgers, bears, coatis, hedgehogs, opossums, skunks, sloths, squirrels,[11] raccoons, chipmunks,[12] mice,[13] and rats.[14] Hominidae, including humans and chimpanzees, are omnivores.[2][15][16] 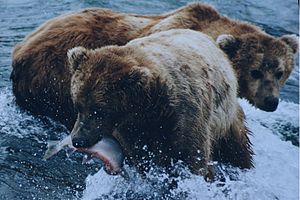 Most bear species are omnivores

Most bear species are omnivores,[17] but individual diets can range from almost exclusively herbivorous to almost exclusively carnivorous, depending on what food sources are available locally and seasonally. Polar bears are classified as carnivores, both taxonomically (they are in the order Carnivora), and behaviorally (they subsist on a largely carnivorous diet). Depending on the species of bear, there is generally a preference for one class of food, as plants and animals are digested differently. Wolf subspecies (including wolves, dogs, dingoes, and coyotes) have a general preference and are evolutionarily geared towards meat, but also will voluntarily eat plant material like fruits, vegetables, and grasses, and can live on such indefinitely.[18] Also, the maned wolf is a canid whose diet is naturally 50% plant matter.

While most mammals may display "omnivorous" behavior patterns depending on conditions of supply, culture, season and so on, they will generally prefer a particular class of food, to which their digestive processes are adapted. Like most arboreal species, most squirrels are primarily granivores, subsisting on nuts and seeds.[19] But like virtually all mammals, squirrels avidly consume some animal food when it becomes available. For example, the American Eastern gray squirrel has been introduced by humans to parts of Britain, continental Europe and South Africa. Where it flourishes, its effect on populations of nesting birds is often serious, largely because of consumption of eggs and nestlings.[20][21]

Various birds are omnivorous, with diets varying from berries and nectar to insects, worms, fish, and small rodents. Examples include cassowaries, chickens, crows[22] and related corvids, keas, rallidae, and rheas. In addition, some lizards, turtles, fish (such as piranhas and catfish), and invertebrates are also omnivorous.

Quite often, mainly herbivorous creatures will eagerly eat small quantities of animal food when it becomes available. Although this is trivial most of the time, omnivorous or herbivorous birds, such as sparrows, often will feed their chicks insects while food is most needed for growth.[23] On close inspection it appears that nectar-feeding birds such as sunbirds rely on the ants and other insects that they find in flowers, not for a richer supply of protein, but for essential nutrients such as Cyanocobalamin that are absent from nectar. Similarly, monkeys of many species eat maggoty fruit, sometimes in clear preference to sound fruit.[24] When to refer to such animals as omnivorous, or otherwise, is a question of context and emphasis, rather than of definition.