From Infogalactic: the planetary knowledge core
Jump to: navigation, search
For the neighborhood in Duluth, Minnesota, see Oneota (Duluth). 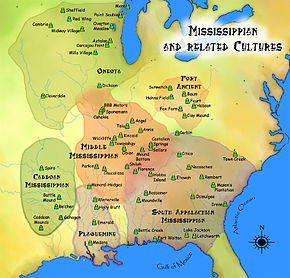 A map showing approximate areas of various Mississippian and related cultures, including the Oneota.

Oneota is a designation archaeologists use to refer to a cultural complex that existed in the eastern plains and Great Lakes area of what is now the United States from around AD 900 to around 1650 or 1700. Based on classification defined in Gordon Willey and Philip Phillips' 1958 book Method and Theory in American Archaeology, the Oneota culture belongs to formative stage.[1] The culture is believed to have transitioned into various Macro-Siouan cultures of the protohistoric and historic times such as Ioway. A long-accepted ancestry to the Ho-chunk has yet to be conclusively demonstrated.

Oneota is considered a major component of Upper Mississippian culture. It is characterized by globular, shell-tempered pottery that is often coarse in fibre. It often had a spherical body, short necks and/or a flat lip. Sometimes the vessels had strap handles. Decoration includes wavy and zigzag lines, often in parallel. Most decoration was done on the top half of the vessel.[2]

Analytically, the culture has been broken down into various stages or horizons. Generally accepted are the following:

In addition, the Oneota culture has been divided geographically based on stylistic and socio-economic differences. Some of these traditions are Orr, Langford, and Fisher-Huber.

The Oneota diet included corn, beans, and squash, wild rice, nuts, fish, deer, and bison, varying according to the region and locale.[3]

Relationships with Middle Mississippian were present but are not yet clearly understood. Whether Oneota developed in situ out of Late Woodland cultures, was invasive, was the result of influence from (proto-)Middle Mississippian peoples, or was some mix of these, is not clear.