Ontario is the largest city in Malheur County, Oregon, United States. It lies along the Snake River at the Idaho border. The population was 11,366 at the 2010 census.[6] The city is the largest community in the region of far eastern Oregon, also known as the Western Treasure Valley.

Ontario is the principal city of the Ontario, OR-ID Micropolitan Statistical Area, which includes Malheur County in Oregon and Payette County in Idaho.

Ontario is approximately halfway between Portland and Salt Lake City. It is the closest city to the Idaho border along Interstate 84. The city's slogan is "Where Oregon Begins".

Ontario was founded on June 11, 1883, by developers William Morfitt, Mary Richardson, Daniel Smith, and James Virtue. In March 1884, Richard Welch started a post office for the quarter of Ontario, so named by James Virtue after Ontario, Canada. Two months later Joseph Morton applied for a Morton post office at an island about one mile south of town, with Oscar Scott as postmaster. Unfortunately for Morton and Scott, merchants Morfitt and Richardson of Malheur City, gold miner Virtue, and lumberman Smith of Baker City acquired more land and were better financed. More importantly, Morfitt had negotiated a train depot for Ontario. All the settlers and speculators knew the railroad was coming and how important that would be to Ontario's future so Scott closed his Morton post office and built a hotel at present-day Ontario. By December, Scott was Ontario's postmaster.

The town continued to grow with the arrival of the Oregon Short Line Railroad in later 1884, and freight and passenger service were added to the town's offerings. Soon after, stock began arriving from Eastern Oregon's cattle ranches to Ontario's stockyard for transshipment to markets throughout the Pacific Northwest. Ontario became one of the largest stockyards in the West. In addition, the construction of the Nevada Ditch and other canals aided the burgeoning agricultural industry, adding those products to Ontario's exports.

Ontario was incorporated by the Oregon Legislative Assembly on February 11, 1899.[7]

A city by the time of World War II, Ontario Mayor Elmo Smith allowed Japanese Americans to settle at a time when much of the West Coast supported their exclusion. Smith told the Associated Press "If the Japs, both alien and nationals, are a menace to the Pacific Coast safety unless they are moved inland, it appears downright cowardly to take any other stand than to put out the call, 'Send them along; we'll cooperate to the fullest possible extent in taking care of them.'" A population of about 134 in the city and surrounding county before the war ballooned to 1,000 as the county recruited farm workers during the war.[8]

File:Wheat Fields After a Storm, Ontario Oregon.jpg
Storm clouds leaving during a sunset over wheat fields in Ontario, Oregon. Wheat as well as onions are a popular crop in this area due to the arid climate.[9] 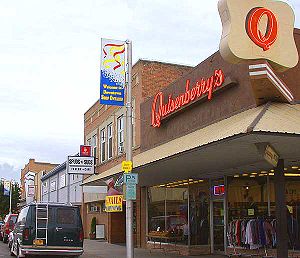 There were 4,275 households of which 35.4% had children under the age of 18 living with them, 41.3% were married couples living together, 16.0% had a female householder with no husband present, 5.3% had a male householder with no wife present, and 37.4% were non-families. 30.9% of all households were made up of individuals and 15.3% had someone living alone who was 65 years of age or older. The average household size was 2.60 and the average family size was 3.28.

There were 4,084 households out of which 35.6% had children under the age of 18 living with them, 47.4% were married couples living together, 13.1% had a female householder with no husband present, and 35.5% were non-families. 30.4% of all households were made up of individuals and 15.4% had someone living alone who was 65 years of age or older. The average household size was 2.63 and the average family size was 3.30.

The region's primary industry is the cultivation of russet potatoes, sugar beets, and onions. The Heinz Frozen Food Company (formerly Ore-Ida), a subsidiary of H. J. Heinz Company, processes locally grown potatoes, and annually produces over 600,000,000 pounds (270,000,000 kg) of 75 different potato products, while employing approximately 1,000.[14] Ontario also has a growing retail-based economy which attracts shoppers from throughout the county and from Idaho's Payette County, particularly from the nearby cities of Payette, Fruitland, and New Plymouth. Big-box retailers Wal-Mart and Home Depot dominate the retail sector, however, the lack of a sales tax in the state attracts relocating retailers and shoppers from Idaho communities. Ontario also attracts employees, who benefit from a minimum wage that as of 2012[update] was 21% higher than the one paid in Idaho.

The Four Rivers Cultural Center, which was named by John and Chaundra Cammack, was named after the Snake, Malheur, Owyhee and Payette rivers, has a museum that traces the history of settlement in the area by the Northern Paiutes and Basque, Japanese American, Eskimos, Hispanic and European American immigrants. The center's theater and conference center contribute regional dollars to the local economy, as does Treasure Valley Community College, located near the cultural center.

St. Alphonsus Medical Center is a 49-bed, acute-care hospital, serving Ontario and the surrounding communities in Eastern Oregon and southwestern Idaho; it is part of the hospital system of Saint Alphonsus Regional Medical Center in Boise, Idaho.[15]

Ontario is served by the Ontario School District (8C) public schools and by private schools.

Ontario has one sister city, as designated by Sister Cities International:[19]